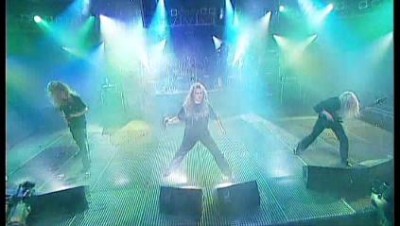 If you're reading this review right now, I think it's safe to assume you most likely are a fan of the band Decapitated, and you want to know if this DVD is worth the money. I'm not 100 percent familiar with the music this band has released, but I'm into the head bangin' thing, and I thought this would be the perfect way to familiarize myself with the band I've heard so much about from my friends. In short though, this DVD has a pretty sloppy presentation.

It feels like this DVD was recycled from some other live performance offering, because the main menu on this disc is playing Slayer's infamous track, Mandatory Suicide. I thought there was no way somebody could have messed up that bad, so I figured perhaps they covered it during the Krakow, October 2nd performance that's featured on the disc. Nope. Perhaps it was covered on one of the bonus videos here? Nope!

I know it's probably a mistake, but I have to go with what's presented on this release. Why would you have a Slayer track playing on the main menu of a Decapitated DVD? This band does cover the classic Slayer song, but not on this DVD. Wouldn't you want to have some of your own music showcased on the main menu? To me, that just says 'we're not confident enough in our own material, so we're going to let you listen to some Slayer to pump you up instead'. 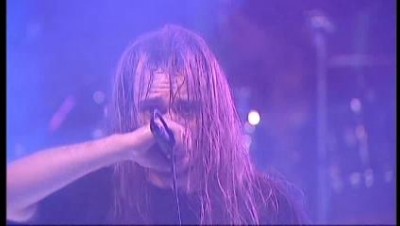 Obviously, the music is heavy and fast, and looking at the quality of their playing during this performance, it's a decent show. Anyone who's ever played a guitar or a set of drums, or even Guitar Hero knows how tough it can be to play songs that are so fast, so I give a lot of credit to the band for being able to stay in sync throughout the entirety of their performance.

However, as a person who prefers metal over any other music genre, I have to say this 35 minute show is sort of a letdown. The music itself is great. In fact, I think I'm going to become much more familiar with Decapitated's work in the very near future. But if you're going to get up on a stage and perform some sick ass death metal, you better be ready to not just play and vocalize well, you need to have some energy on the stage! Everyone stayed in the same spot on the stage for the entire 35 minutes. They would bang their heads and swing their hair around, but there was no real energy. The stage presence was weak, there's just no other way to put it. It shows in the audience, too. I mean, you have a death metal band rocking their asses off on stage, and the crowd doesn't seem to be getting very crazy at all. That's not exactly typical at a metal show.

I'm not sure if this was artistic intent, or an effort to make up for the bands lack of stage presence, but the camera work is atrocious. I can imagine the cameramen being screamed at through their headphones: "ZOOM IN! ZOOM OUT! ZOOM IN AGAIN! YEAHHHHHHHH NOW ZOOM OUT! NOW ZOOM IN AGAIN! GIVE IT TO ME! YEAHHHH!" I'm not sure if you've ever had the opportunity to operate a zoom switch on a professional studio camera, but it's a sensitive little bugger that can be rocked forward or backward. It's as if a kindergartner was given the zoom switch and was told to have a blast with it.

If you just wanted to own something from this band on DVD, then I guess this is the way to go but, I'd only really suggest a fan gives this DVD a try. The lack of any high energy from the band, as well as the crowd, isn't exactly a performance you'd want to forever showcase on your home theater.

The video is presented in a 16:9 aspect ratio, and depending on the camera angle, there's usually a small black bar on either the right or left side of the screen. It's not something you'd really notice that much, as the terrible camera work is going to keep your eyes away from the side of the screen.

The black levels are pretty good, and there's no grain. Those are about the only nice things I can say though, as the overall image is soft, displays a little interlacing at times, and is absolutely loaded with macro-blocking. It's better than watching a YouTube video that's been blown up to fill your screen, but as far as DVD's go, it's pretty awful. Another culprit that's easy to see most of the time is edge enhancement. This is clearer when you come across a camera angle that's actually still for a moment, but is hard to notice as most of the time the cameras are erratic.

I cranked the Dolby Digital 5.1 track up pretty darn loud, and unlike the video, the audio track here is actually pretty good. I felt engulfed in the show thanks to the really decent mix. The instruments were clear enough to distinguish without distorting each other, but they were extremely loud. It really sounded like I was at the show. Of course, you'd benefit from this track more and more the louder you're able to turn it up. If you have neighbors who don't care, aren't home, or if you live in a house, crank this thing up. It's a pretty accurate representation of how it would have sounded at the show, so at least I can give big thumbs up in this portion of the review.

Also included is a Dolby Digital 2.0 mix as well. 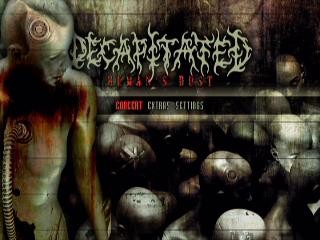 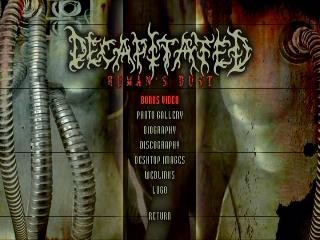 Bonus Video - As a bonus, we're given three live songs from their Ozzfest performance on May 29th of 2002, in Katowice. This is about fifteen minutes in length, but not really much different in the way of stage presence. This concert is presented in a 4:3 aspect ratio.

There's also their performance from March 13th of 2004, at Metalmania in Katowice. The lead singer has shaved his head, and seems to have gotten better at his stage presence. He's still not moving around so much, but he carries himself in a completely different way that somehow pulls off a new and effective vibe. This is almost a half an hour in length, and is presented in the 16:9 format. This is actually a better performance than what's available as the main concert on the disc, which is pretty sad. I think most people who decide to check out the first DVD from Decapitated would agree, so why wouldn't they push that as the main performance on this release? 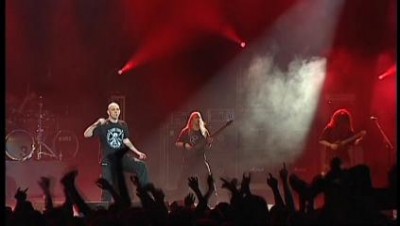 Interviews - Three interviews are available, two from 2002, and one from 2004. They're pretty short, and they're fairly basic in what questions are being asked. There is some pretty cool information though. There was one instance the band was kicking ass at a show, but their time ended and the lights in the club got shut off, but they kept playing in the dark anyway. That's dedication. This band is from overseas, so subtitles are provided so you can understand the interview.

Winds of Creation Video Clip - This is a music video for one of their most successful hits, and is edited together with mostly live material.

Also included is a photo gallery, biography, discography list, desktop images, web links, and a 4:3 image of their logo that you can look at.

I think you should probably skip this release. The audio is very nice, but the video presentation is pretty bad. Not only that, but you're likely to get a bad case of motion sickness while watching this, thanks to shoddy camera work. It's sad when a live DVD for a band has to open its introductory menu with a Slayer song that's not even covered in the live performance. It's also pretty sad when some of the bonus concert footage is better than the featured performance. I'm glad I got a formal introduction to Decapitated, because the music is a must if you like death metal. It's just disappointing to see them for the first time on such a horribly mishandled DVD.