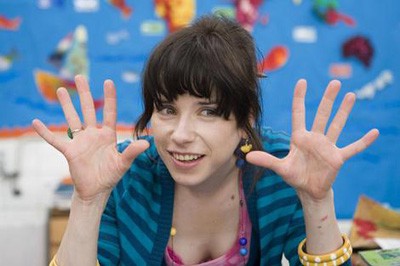 Happy-Go-Lucky is the new film from British director Mike Leigh, who is known for telling stories of the working class that chronicle their fancies and their doldrums in a modern style that resembles the Kitchen Sink cinema from the 1960s. In this latest offering, Leigh could have easily adopted Charlie Chaplin's "Smile" as the movie's theme song, as it seems to be what he's encouraging his audience to do: smile, even when it's not that easy to do.

Sally Hawkins, last seen as Colin Farrell's girlfriend in Woody Allen's Cassandra's Dream, stars as Poppy, a kindergarten teacher with a relentlessly upbeat outlook on life. Practically a child herself, she's equally at home in the classroom or on the dancefloor. Like any single young woman at age 30, she still likes to go out drinking with her girlfriends, but she's also slightly adventurous, booking weekly trampoline sessions and joining a co-worker for flamenco lessons because it sounds like fun. At the beginning of the movie, Poppy's bike is stolen, and instead of lamenting over it, she decides to learn to drive instead.

Poppy's driving instructor is one of the first of several challenges to Poppy's worldview. Scott (Eddie Marsan, Hancock) is an angry little man with a lot of pent-up issues. He takes his job way too seriously, and he is easily provoked. Thus, he and Poppy get on like paper and a match, since she seemingly can't take anything seriously. In fact, she's often exhausting to watch, so I can't imagine what it must be like to be around her. Poppy can't let any comment pass without tossing out a silly joke, and she rarely answers a serious question with a serious answer. Honestly, I found her to be extremely annoying at first, and I was dreading spending two hours in her company.

Then came the first flamenco lesson. My whole attitude changed watching her interact with the class. Regardless of how stern the lead dancer's demeanor, Poppy always maintains her smile and her gung-ho attitude. She doesn't necessarily follow instruction, instead looking around the room at the other students and trying to elicit a reaction from them. Watching her pantomime amongst the group, a silly grin on her face and a knowing look in her eyes, it occurred to me that Poppy was like other clowns in motion picture history, characters like Chaplin's Tramp or Tati's Hulot. Though she is clearly more vocal than these mostly silent characters, she is like them in that she realizes that the rest of the world is too uptight and is doing her level best to keep from letting it grind her down.

Happy-Go-Lucky is Mike Leigh's study of this kind of figure. The movie is the writer/director's way of deconstructing the clown in order to see what makes her function. Throughout the film, he continually disarms Poppy, tossing her challenges she can't get out of by cracking wise. Her driving instructor, an abused student in her class, the recriminations of her middle sister (Caroline Martin), the prodding of her longsuffering roommate (Alexis Zegerman)--all of these people pick at the clown's mask and question if her brave face is real. It's to Poppy's credit that she is able to dial it down and prove that she can handle the bad as well as the good. Like all people who make us laugh, she is a caregiver, intent on alleviating the sadness of others even if it means harboring her own. She can be fierce, such as when she witnesses a boyfriend yelling at her youngest sister (Kate O'Flynn), but she can also be extremely empathetic. When she randomly encounters a homeless man (Stanley Townsend) in the middle of a psychotic episode, she sits with him rather than running away, answering all of his half-finished utterances with affirmative responses. It's a beautiful acting moment, centering on a look that Hawkins and Townsend exchange at the end of the scene, the masks clearing away for both of them for one truly honest moment.

Sally Hawkins is actually superb throughout. I don't think I would have wanted to strangle her as much as I sometimes did were she not. She makes Poppy a complete character, not just a collection of catchphrases and nervous ticks. She never once breaks character or appears to be an actress performing a role, every moment is authentic. During much of the joking, there is obviously more going on behind it. The outward expression may be physical, but the true weight of the performance is all mental. Thus, when it's revealed how much strength is really backing up the buffoonery, we can believe it.

Mike Leigh's shooting style is often stark, letting the setting and the actors dictate where he takes his camera. Once or twice, he indulges in a larger shot, pulling back to show us the landscape, but it's not just decoration, it's purposeful. The world these characters live in is just as important to their state of being as anything else. Over the course of the various conflicts, he slowly moves in closer, until in the final confrontation between Poppy and Scott, their heads take up the entire frame, and he rapidly cuts back and forth between them. (Though, such is the gravitational pull of the Poppy character, in all of the conversations, Leigh has no choice but to quickly cut back to Hawkins to catch her rejoinders.) There's a psychology to how Leigh sets up Happy-Go-Lucky, but it's not forceful or overbearing. The characters, their environment, and the greater narrative are all perfectly entwined. The final scene of the film is a little on-the-nose in comparison to the rest, but better to drift out of a story like this than superimpose a false dramatic arc over the top.

I doubt Happy-Go-Lucky is going to make Mike Leigh a household name. If anything, he's like Woody Allen in that he puts out a consistent stream of product that tends to cover a lot of the same ground, and when either of them hits the mark, they hit it quite well. Happy-Go-Lucky is a good movie propped up by excellent actors, and as seems to be its intention, is sure to leave you smiling.