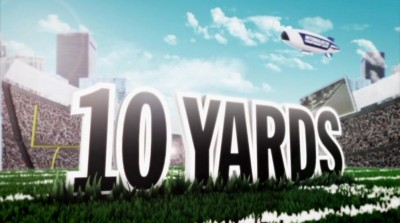 To me, Fantasy Football is this undefined experience shared by strangers with lives hinged upon Sunday afternoons and Monday nights. It's chess for the average football fanatic; the contest a way to enter the weekly NFL sweepstakes without actually suiting up and taking hits on the field. The documentary "10 Yards" scrubs away the mystifying veneer of Fantasy Football to expose the weekly highs and lows of the subculture, and how something as inexplicable as tracking game stats helps to bridge lives otherwise lived without communication.

If you've had the pleasure of viewing the 2007 cross-country documentary "10 MPH," "10 Yards" is something in the realm of a sequel. Returning are director Hunter Weeks, editor Josh Caldwell, and suburban clown j.fred, and this adventure takes the guys to the land of Fantasy Football, where they meticulously build teams and eagerly embark on a season-long journey of tight competition, the ultimate prize being not a sack of money, but a box of Twinkies. 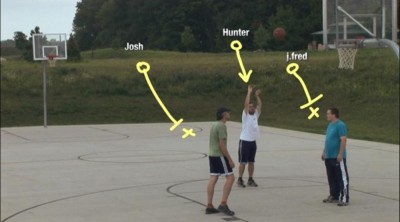 Being an underground brotherhood, Fantasy Football is a difficult pastime to explain to the outsider. "10 Yards" does an admirable job communicating a broad overview of what participants need to contribute, how points are scored, and what results are required for victory. It's a tangled web of perspectives and regional rulemaking, yet the picture makes the complicated core of Fantasy Football lucid enough to keep up with the drama that soon unfolds. I can't say I'm equipped to jump into a league of my own, but Weeks drops enough pertinent information (visualized through appropriate scoreboard graphics) to keep the confused...well, less confused.

Playing in the Intergalactic Championship League, Hunter (with his team the Aphids), Josh (Shaky Legs), and j.fred (Phantom 309) really employed their struggles on the gridiron as an excuse to spend time with each other. The bonds of Fantasy Football form the thematic whole of "10 Yards," observing the creation of teams and leagues not just as a competition, but as a social circle that can withstand the needs of families and other worldly demands. The game is played with maximum verbal bloodshed, yet it's ultimately about friendship, with plenty of fist-bumps, laughs, and concerns shared amongst the group as they play out their weekly wars. 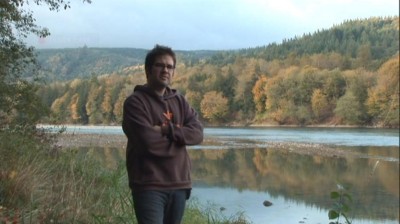 To better underline the union of Fantasy Football, Weeks and the gang travel throughout America to meet with the players, leagues, and masterminds behind the pastime. As with "10 MPH," the tour of Americana is where Weeks excels as a filmmaker, evoking a warm sense of community as he visits places of interest, both for Fantasy Football purposes and familial obligation: Ranton, New Mexico greets the old-school players of the game; Seattle explores the intricate online infrastructure that removes much of the guesswork out of the competition; in Denver, "10 Yards" showcases a combative married couple who live for the weekends; Oakland brings an interview with game creators in the city where it all began; and Minneapolis is home to absolute anxiety when the playoffs begin during the holiday season. Leaping all over the country (even a league reunion on Mexico), "10 Yards" transcends its potentially narrow field of vision by including needed, and welcome, location variation.

The heart of "10 Yards" remains with the guys. Furthering their relationship with the camera, Weeks, Caldwell, and j.fred are the stars of the show, providing diary entries, monologues (j.fred is the retiring commissioner of the league), and playful camaraderie for the audience, just as they did in "10 MPH." It's a laid back dynamic, but a genuine bond, witnessed when Caldwell hits a rough patch of life that takes him out of the game for a short period of time. Again, to really appreciate the filmmakers and their idiosyncrasies, it's best to see "10 MPH" beforehand, though coming cold to "10 Yards" won't hurt the viewing experience. It'll just make j.fred's blunt jester-like personality appear a little strange at first. 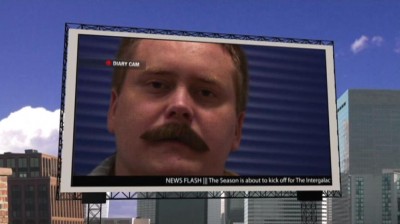 Presented in anamorphic widescreen (1.85:1 aspect ratio), "10 Yards" turns the commercial-grade DV cinematography into a satisfying visual experience, with generous colors to enjoy and a crisp image. Made on a modest budget (with corporate sponsorship, explaining why the guys favor Rock Bottom breweries so such), the film doesn't overextended itself visually, yet it preserves the flavors of the locations and the low-tech, living-room gladiator feel of Fantasy Football.

The 2.0 Dolby Digital mix has to combat a few echoy interviews, but the sonic experience suits the film well. Soundtracks selections have wonderful fidelity, communicating the homegrown action with buoyancy. While the film has a few microphone limitations, it doesn't detract from the listening experience. 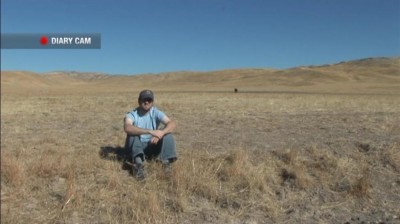 A feature-length audio commentary with Hunter Weeks, Josh Caldwell, and j.fred was recorded conference-call style, resulting in audio problems that occasionally muffle what the participants are trying to articulate. Weeks leads the discussion, dishing out his choices as a director, describing interview situations, and chatting up more Fantasy Football trivia. Caldwell and j.fred add their own spice to the mix. The guys have wonderful chemistry and the information presented is valuable if you enjoy the film. If only the audio quality matched the commentary effort.

To the director's credit, tension is stoked as the weekly results come in and the trio rides the stats to both jubilant and disgraceful results. Everyone keeps their sense of humor, but watching Weeks, Caldwell, and j.fred engage in weekend warfare packs more suspense than expected, along with some needed heart. As much as "10 Yards" comes across as specialized product for Fantasy Football fans only, it manages to transcend the game to paint a picture of companionship that's sincere and quite enviable. 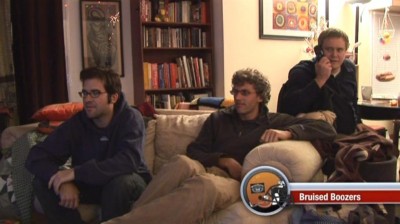