Other // Unrated // August 26, 2008
List Price: $29.95 [Buy now and save at Amazon]
Review by Chris Neilson | posted October 20, 2008 | E-mail the Author
Ryan Dacko is the director, producer, writer, editor, narrator and star of Plan 9 From Syracuse, a documentary about Dacko's quixotic attempt to run 3000 miles from Syracuse, New York to Hollywood, California. Dacko didn't undertake this odyssey because he's an ultra-marathon runner looking for a new challenge, and he didn't run for charity or to raise awareness about a public issue; he ran in hopes of impressing a movie producer into agreeing to give him 30 minutes to pitch a movie.

After a stint in the Coast Guard, Dacko returned home to Syracuse, New York to work odd jobs to finance his own independent films. He completed his first feature film And I Lived in 2004. From the handful of snippets included in this documentary, And I Lived appears to be an angst-ridden teen action-romance about a rich girl falling for a poor boy that shows no signs of the kind of ingenuity that propelled other first-time, self-financed projects into the spotlight such as Christopher Nolan's Following made for $6000 or Robert Rodriguez's El Mariachi made for $7000.

Unable to get distribution for And I Lived and reluctant to make another self-financed micro-budget film, Dacko looked elsewhere for money for his next project, a revisionist vampire screenplay titled Dead Heaven. Among the numerous ways Dacko tried to attract financing was taking a Greyhound bus to Hollywood and personally walking the screenplay and self-financed trailer around to producers, and having his local producer bike from Syracuse to Ontario, Canada to generate buzz. Though these efforts came up short, Dacko was not dissuaded from his dream.

Never doubting his ability as a filmmaker, Dacko decided that what he needed was simply a bigger stunt. That's apparently where he latched upon the idea of running from Syracuse to Hollywood, almost 3000 miles in 90 days, to secure a 30-minute meeting with billionaire Dallas Mavericks owner and movie producer Mark Cuban (Good Night, and Good Luck). It's not clear why Dacko thought this scheme would work, and he doesn't satisfactorily explain it either other than to say that moviemaking is "a very flighty business" for which "you have to have a gimmick." 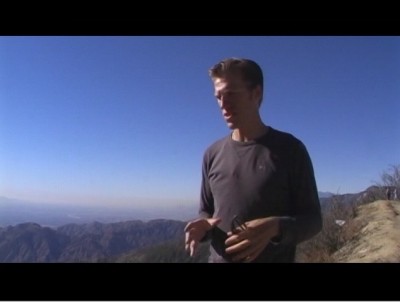 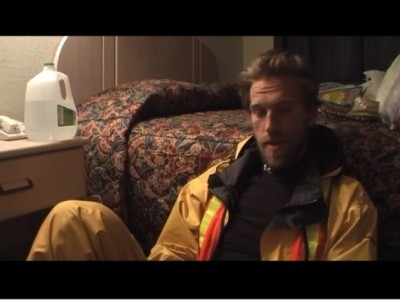 Dacko's scheme faces obstacles from start to finish. He doesn't set out until August 15th, guaranteeing that the weather would work against him. He's unable to secure a reliable support van driver/cameraman, leading to the need to find replacements more than once (the first after only two days). Having never run more than ten miles before, he's physically unconditioned for the 35-mile days he has scheduled. His threadbare budget cannot brook any unforeseen disruptions of which there are many. He's unable to generate the media buzz he'd hoped for. And, worst of all, before Dacko can even make it through Indiana, Cuban pronounces Dacko's stunt stupid and makes it clear that he will not be cajoled into meeting with him under any circumstances.

The fact that Cuban offers to read any script Dacko emails him, as he does all submissions from aspiring filmmakers, no doubt further serves to undermine Dacko with the media and viewers still skeptical about the logic of this stunt. It probably also doesn't help that Cuban professes to neither live nor work in California, which seems like the kind of thing Dacko would have wanted to consider before trying to run to Hollywood.

Plan 9 From Syracuse is crafted from 34 hours of DV footage shot on the road and from more than 3000 stills snapped principally by the filmmaker's sister, Delaine Dacko who also served as the final relief driver for the support van. The footage principally is of Dacko running toward and away from the support van, and quickly grows monotonous with only the landscape and weather changing from shot to shot. 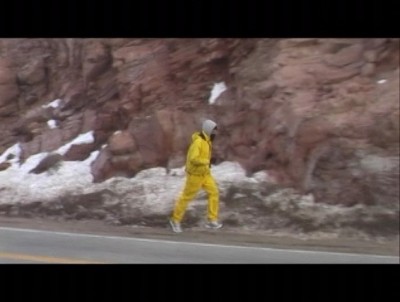 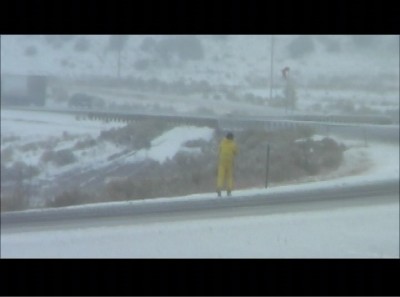 Viewers hoping for funny, delusionally-grandiose rants from Dacko are going to be disappointed. Through the few contemporaneously recorded snippets and the lengthy post-production narration, he mostly confines himself to meager banalities. These are typical of what you can expect:

"I want to almost show that my heart and love for movies is so great that this is what I'm willing to do just for a 30-minute meeting."

"I started to doubt everything. Would this be the biggest mistake of my career? I had a cellular phone in my pocket every step of the way and our potential producer had the number. Was he ever going to call or was what he wrote back in Indiana the truth? Maybe I was pretty damn stupid as he had described me."

"I was on auto-pilot. My body was programmed to run and that is what it did. My heart seemed to be on life support."

And, don't expect any big conclusions from Dacko in the film or on either of the two commentary tracks either. In the end, he decides Hollywood really is just "all about who you know" though I'll leave it at that so as not to spoil the drama of whether he manages to run the entire way and whether he ever gets his meeting with Cuban, though those looking for the rest of the story now can find it at his website Plan9FromSyracuse.com.

By far the best thing going for Plan 9 From Syracuse is a superb soundtrack by The Lost Patrol whose mix of surf-rock-cum-Spaghetti-western instrumentals and shoegazing vocals almost makes up for everything else, especially if you skip straight to the isolated soundtrack.

Presentation
Video:
Shot on DV, mostly by non-professionals along the roadside, the quality of video is actually better than one might expect. The 1.78:1 letterboxed image suffers from mild aliasing and digital combing, but otherwise looks acceptable and in keeping with what one normally sees in low-budget documentaries of this kind.

Audio:
Background noise levels can be a problem on the few snippets of synchronized sound material, but for the vast majority of post-production narration, audio is clear with the soundtrack sounding especially good on the 2.0 DD mix.

No subtitles are offered on this release.

Extras:
The extras include a much welcomed isolated music soundtrack, a director's commentary, a soundtrack commentary with the filmmaker and Lost Patrol guitarist Stephen Masucci and manager Ed Colavito, and a brief comment from Mark Cuban caught at South By Southwest (SXSW).

Final Thoughts:
If the premise of running 3000 miles to impress a movie producer leaves you wondering why Ryan Dacko didn't just plow that time and money into making another micro-budget "calling-card" film that would have the producers coming to him, consider that perhaps this documentary is that micro-budget film. When you think of it that way, maybe Dacko is more wily than he's been given credit for.