Talib Kweli: Live at the Shrine 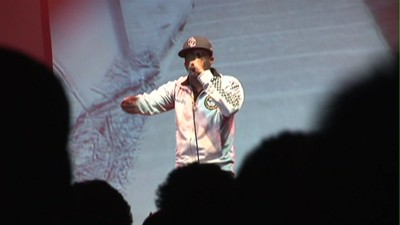 My public service announcement of the day is to warn you not to load Talib Kweli: Live at the Shrine into your DVD player and walk away to do other things before hitting play, because the 40-second clip they use for the menu loop will drive you insane. Even worse, when you rush to your remote to hit play because you can't stand one more "wave your hands in the air," those doubts you're having about your sanity will become even more frightening because that loop is actually the intro for the first song, "Say Something." I thought maybe I was going to get stuck in place, like a damaged record, forced to listen to the same thing for the rest of my life.

Thankfully, this was not the case, I have now moved on, the DVD makers just didn't go very far to take their sample. After that 40 seconds, the song proper kicks in, and at the two-minute mark, when the DJ breaks down the music and Talib Kweli puts his much-lauded verbal dexterity front and center, the hip-hop clichés disappear and the show really takes off.

Recorded in Los Angeles earlier this year, Talib Kweli: Live at the Shrine is a 40-minute concert from the extremely influential rapper. For most of the show, it's just Talib and his microphone backed up by a single DJ. No posse, no big effects, just the beats and the rhymes, the things that have made Kweli a respected star. His voice is solid throughout, maintaining the impressive pace that characterizes his music without losing his breath or sacrificing any lyrical clarity. He's on point from start to finish, taking a break in a couple of songs to give the stage to a variety of guests: the female vocalist Res on "Too Late," the Strong Arm Steady crew on "Go With Us/One Step," and hip-hop pioneer KRS-One on the finale, "The Perfect Beat."

From a production standpoint, Live at the Shrine won't win any awards. Shot on video, the picture quality isn't anything special, but there are multiple camera angles and the editor jumps between them at a pace that matches the energy of the music without being obnoxious about it. There are sometimes more crowd shots than are necessary, but the image smartly focuses tighter on Kweli when he goes in for one of his more impressive vocal runs. The sound is of excellent quality, mixed with the right amount of polish so it still sounds live. The set list also has a lot of variety, and though I do appreciate how Kweli keeps the show moving, I wouldn't have complained had he given more of the songs their full due rather than cutting them short. He goes through the 16-song set like a runaway train, one song rolling into the next with nary a pause. The final five, in particular, from "Hostile Gospel" through the hit "Get By" and the KRS-One collaboration establishes a wicked tempo that made me breathless--and I was just sitting here!

The full song list for the concert is: Say Something * Eternalists * Down for the Count * Listen * Definition * Get 'em High * Too Late (featuring Res) * Go With Us/One Step (feat. Strong Arm Steady) * Never Been In Love * Hot Thing * Hostile Gospel * The Blast * Move Something * Get By * The Perfect Beat (feat. KRS-One)

That's a lot of songs but the running length is less than your average CD. (The time on the back cover, 77 minutes, presumably includes the extras, but even then is about ten minutes short of the actual complete time.) While the performance is great and Talib Kweli doesn't wear out his welcome, it does seem like more of a warm-up than a full show. Still, if you're a fan of Talib Kweli, there is no way you're not going to enjoy Live at the Shrine. It's a great example of how exciting rap can be in a live venue, especially since the main star is the music and not a lot of posturing or preening. 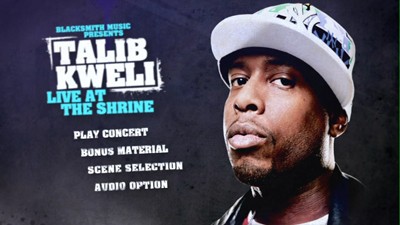 Video:
The DVD has a clean widescreen picture that is a little low-rez but is not bad for a video production of this kind. The biggest problem is some instances of combing, but overall it looks decent.

Sound:
There are two audio tracks here, 5.1 and 2.0 Dolby mixes. The 5.1 is excellent, with strong levels and a clarity that is maintained even when you crank up the volume--which you should!

Extras:
Talib Kweli: Live at the Shrine is housed in a standard plastic keepcase. It has a one-sheet insert advertising other releases on Kweli's own Blacksmith label. The insert also has a slugline with a website consumers can visit if they can't find the Easter Egg on the disc. I found it pretty easy. Go to the audio options menu and press your "up" arrow, and there is a short scene of Kweli and KRS freestyling.

A 5-and-a-half minute interview with Talib Kweli and various collaborators starts off the bonus section, with the rapper talking about how the show came together (the night was a bigger event with more acts than we see on the DVD) and promoting his label alongside backstage footage and a peek into rehearsals. There is also a separate look at that rehearsal, and that featurette runs 13 minutes. The audio recording here is pretty raw, and there are also members of Kweli's entourage wandering around and goofing off, which is distracting. As an extra, it's of mild interest, not likely something you're going to watch more than once.

KRS-One is also interviewed (8 minutes, 10 seconds) about the show, his appreciation of Talib Kweli, and the hip-hop legacy. This also includes footage of KRS' solo performance from the Shrine event.

FINAL THOUGHTS:
Recommended. Talib Kweli: Live at the Shrine is a brief but lively showcase for Talib Kweli's rap skills. He is in fine form, showing off his fast-talking style and running through a good selection of his popular songs. I'd have preferred a little more than 40 minutes of music, but at least what we get is all killer and no filler. 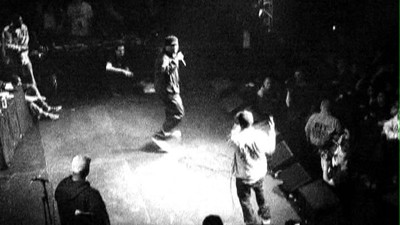