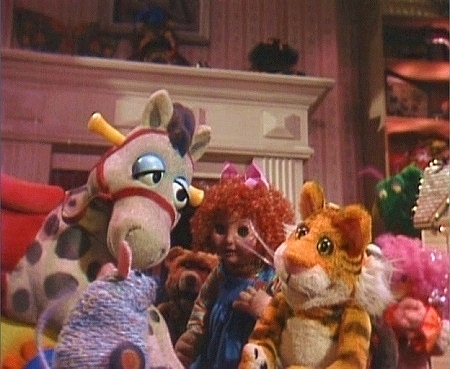 Stop me if you've heard this one before: a roomful of toys comes to life when the humans aren't around, each equipped with their own unique personality. Among others, these toys include a few dolls, a talking phone, a robot, a motorized car and several stuffed animals. The current "favorite toy" is a bit on the cocky side and never believes he'll be replaced, even though new toys arrive to the playroom every year. This year's soon-to-be "favorite" is an action figure from outer space, who believes it's from another dimension and has something of a superiority complex. By the end of the adventure, the toys must learn to become friends---or at the very least, tolerate one another.

Originally broadcast nearly ten years before Pixar's landmark Toy Story (and two years before Tin Toy, even), Jim Henson's The Christmas Toy (1986) still holds its own as a charming holiday favorite. This 50-minute special eventually led to a short-lived series entitled The Secret Life of Toys (which has also earned a DVD release) that expanded the concept somewhat, but most fans of Henson and company will likely remember this yuletide adventure for its timeless themes, fun songs and colorful characters. The Christmas Toy was a perennial favorite around our house growing up; originally sponsored by Kraft Foods, this special even featured holiday-themed recipe segments instead of traditional commercial breaks. After all, nothing says "Christmas dinner" quite like processed cheese.

Our story's basic concept has already been laid out, but the little details are what make The Christmas Toy so unique and enduring. It's Christmas Eve in an unnamed but upscale home: the toys are busy having fun in their playroom, while the children and their parents are making their last-minute holiday preparations. Rugby the Tiger is the aforementioned "favorite" from the previous year. His cocky attitude doesn't sit well with everyone, though Rugby's brashness makes him something of a leader. Others include Apple, a level-headed doll who happens to be the "favorite" from the Christmas before last; Balthasar, a wise old teddy bear who's been around the longest; Belmont, a kind but somewhat fearful riding horse; and Mew, a pint-sized, smelly "cat toy". Rugby doesn't like the fact that this year's competition will be arriving soon, so he sets out to do a little "gift exchange" before the children wake up. Here's the problem, which remains one of the story's most memorable plot devices: any toy caught out of place will be frozen forever. 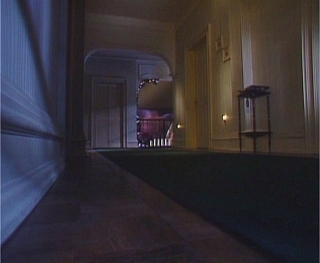 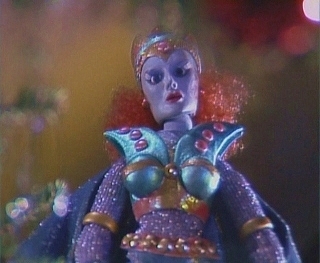 Simply put, they just don't make holiday specials like The Christmas Toy anymore. Filled with plenty of terrific songs (which move the story along with character development, rather than just serving as filler), interesting dynamics between our heroes, a unique perspective and a touch of sadness along the way, The Christmas Toy teaches important lessons without feeling too heavy-handed and saccharine. Like many other Henson-related holiday specials of the era---including the earlier Christmas Eve on Sesame Street and Emmett Otter's Jug-Band Christmas---it brings a unique and simple story to the table, delivering it with skill, precision and charm. Those who remember The Christmas Toy from their childhood will be pleased to know that it's held up quite well during the last two decades, while those unfamiliar with it will discover an accessible adventure that the whole family can enjoy.

Presented on DVD by Lionsgate, The Christmas Toy has finally escaped the clutches of VHS---and though most fans won't like certain aspects of this release, it's somewhat satisfying to have this holiday favorite in any form. Before we get to the technical portion of this review, however, there's one footnote that die-hard Henson disciples should be interested in...

NOTE: This 50-minute special has been slightly trimmed to 48 minutes for this DVD release, unlike the earlier VHS and broadcast versions. Muppet mainstay Kermit the Frog originally served as our "host" for the show, providing a brief introduction and making an appearance at the very end. As Kermit is now owned by Disney, these short scenes had to be trimmed for legal reasons; similar cuts have already been made to other Henson-related DVDs, such as the 2005 re-release of Emmett Otter. This is a disappointing but almost expected caveat, though the cuts will be generally unnoticeable to those unfamiliar with the original version.

Presented in its original 1.33:1 format, The Christmas Toy looks a bit rough around the edges, but this isn't a bad effort overall. Image detail certainly leans towards the soft side on many occasions, undoubtedly due to the original source material. The color palette seems accurate and black levels are fairly consistent, while digital problems seem to have been kept to a minimum. Minor amounts of edge enhancement and interlacing can be spotting along the way, but these issues aren't terribly distracting. Overall, this offers a modest step up from the broadcast presentation and subsequent VHS release, though it's not a night-and-day difference.

The Dolby Digital 2.0 mix is also generally pleasing, especially considering The Christmas Toy's humble origins. Dialogue is generally clean and clear, while the film's frequent music numbers rarely fight for attention. Optional subtitles have not been included during the main feature, though Closed Captions are supported.

Surprisingly enough, no menus are offered here (quite unusual for a major studio release nowadays), which makes this disc seem even more like a slightly upgraded VHS tape. The 48-minute main feature has been divided into roughly half a dozen chapters, while no obvious layer change was detected during playback. This one-disc release is housed in a standard black keepcase with a matching slipcover; also tucked inside is a promotional insert for other Lionsgate titles.

Bonus Features
Not surprisingly enough (especially given the lack of menus), no extras have been included either. Fans probably weren't expecting a Special Edition along the lines of Emmett Otter's Jug-Band Christmas, but a still gallery or a few interviews with the creative team would've been a nice effort. In any case, at least the price is right.
Final Thoughts

It's certainly taken long enough to reach DVD, but The Christmas Toy has finally arrived in time for the holiday season. Our adventure has held up well during the last 22 years, packed with plenty of genuine laughs, terrific music and holiday cheer. More than a simple trip down memory lane, this timeless tale will delight Muppet fans of all ages---but those looking for a fully-loaded treatment may walk away disappointed. Lionsgate's one-disc package represents a slim effort in all departments, including a passable technical presentation and absolutely no bonus features (not even interactive menus!). The removal of our "host" Kermit is another disappointment; though it was almost expected due to rights issues. Still, with a rock-bottom retail price and a main feature this strong, I'd be crazy to steer you away from The Christmas Toy...so pull up a chair, grab some hot cocoa and enjoy the show. Recommended.