Eagle Rock Entertainment // Unrated // December 9, 2008
List Price: $24.98 [Buy now and save at Amazon]
Review by Don Houston | posted November 16, 2008 | E-mail the Author
Background: Tori Amos is a popular musician that has taken a different route to success over the years, preferring to build a small but loyal following of devoted fans rather than burnout quickly as is more typically the case in the music world. Tori is very talented and as I pointed out in her polished concert shot several years ago (Tori Amos: Welcome to Sunny Florida), she connects to her audience on a deeper level than most of her peers, sharing stories and anecdotes with them to further generate a rapport. Those of you that admire the singer/songwriter's work have probably stumbled across some of her concert performances as much as I have (some even sold without her permission), a few of them now officially available on DVD in the form of Tori Amos: Live At Montreux, a collection of two such concerts from the world renowned Montreux Jazz Festival; the first in July of 1991 and the second in 1992. 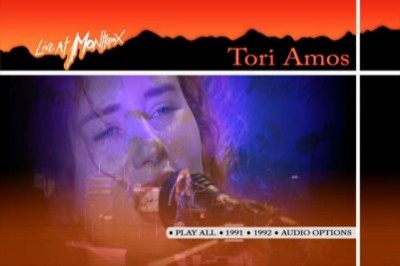 Show: Tori Amos: Live At Montreux might be the first high end concerts the young lady had performed in to that point (at least the 1991 one) but she had developed the skills over years of playing in smaller piano bars and the July 3, 1991 concert washer first at the festival (she opened for the Moody Blues). She gave a decent performance too, showing her charm and almost unknown stature but allowing fans to compare and contrast how her style grew between the show and the follow up that took place on July 7, 1992. By then, her first album had come out and she had grown somewhat hardened of those in the business that seem to prey on newcomers, perhaps not to the degree she was far later in Tori Amos: Welcome to Sunny Florida but even in the way the festival treated her (in the first concert, she is playing a mid-level Yamaha while a real piano was made available for her second show the following year). 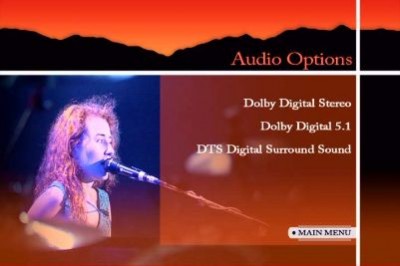 The Audio Options changed somewhat from the SD version

As far as which performance would be classified as "better" I'd have to defer to the judgment of the individual fans too. For me, each had particular aspects that I liked, the initial concert showing some more raw energy while her confidence significantly boosted in the second. The musical selections varied somewhat too but as "Me and a Gun" is a personal favorite and "Smells Like Teen Spirit" was the song that brought me into Tori's world in the first place, the nod goes there for me but there was such a transition between her performances between them, you can't watch one without the other in my opinion. 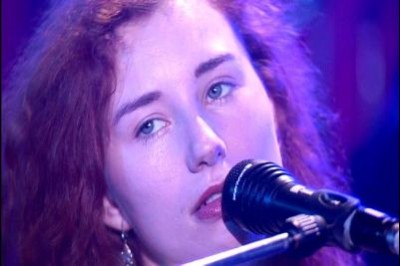 The back cover said this of the shows: "These two complete concerts from Montreux in 1991 and 1992 catch Tori Amos right at the start of her solo career, one shortly before the release of her "Little Earthquakes" album and the second a few months after. There is a clear progression from one year to the next as Tori grows in confidence and skill as a live performer, buoyed by the critical and commercial success of the album. The tracklisting focuses on "Little Earthquakes" and features all the hits from it but there are also rare songs from her early EPs including her distinctive takes on Led Zeppelin's "Whole Lotta Love" and "Thank You" and Nirvana's "Smells Like Teen Spirit". This DVD brilliantly captures the vibrancy of Tori Amos' early live performances." 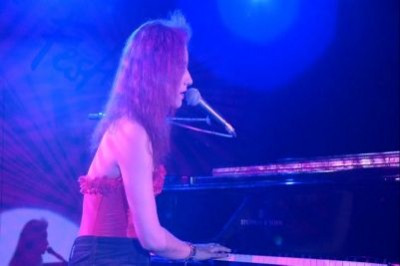 The placement of songs in the mix might be worth further speculation for fans too, the tempo of each concert altered as a result but they were balanced and there was no indication that the DVD presentation was altered as some of the recent concerts I've reviewed were, these providing a much more basic experience without all the trimmings of established acts. In short, this is definitely a "must have" for any fan of Tori Amos but it also serves as a nice bit of entertainment for fans of the Montreux Jazz Festival too, providing more proof that it can help newcomers as well as promote the groups that have already made it big. In terms of sonic appeal, I'd rate this one as Highly Recommended but make no mistake about it, Tori poured a lot of heart into the two concerts and it showed (repeatedly) so if you were not a fan going in, you may find out what the buzz is all about after checking this one out. Here is the listing of the songs from each concert: 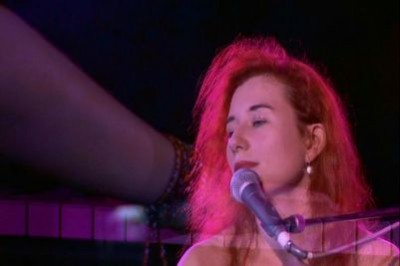 Tori Amos in 1992 into her music as she played

Picture: Tori Amos: Live At Montreux (Blu-ray) was presented in a very crisp widescreen as shot in 1991 and 1992 at the Montreux Jazz Festival by various directors for this AVC encoded high definition definition release. This was an exceptionally clear upgrade from the SD version released a few months ago, the audiop components alone worth the upgrade as far as this fan was concerned. The fleshtones were solid and the detail very high even at 1080p, the video bitrate varying but typically hovering in the 19.6 Mbps area when I paid any attention to it but literally all over the map with it reaching into the 30+ area as well as the mid teens. The multitude of cameras were edited nicely enough though a bit too much fading in and out of shots was used to transition the angles at times, the idea that fans might not care for all sorts of dramatic cuts understood if not agreed upon by this reviewer. Still, there were no major visual issues arising and the intimate nature of the setting served Tori's style better than most of her peers.

Sound: The two concerts were again presented with three choices for viewers to select from, my favorite being the 5.1 DTS-HD Master Audio where the bitrate stayed in the 4.8+ Mbps area, a 5.1 Dolby Digital 448 Kbps, or the 2.0 PCM track with 1.5 Mbps; all with a 48 kHz sampling rate. On the primary track then, there was exceptional separation and the dynamic range was strikingly clear, the fact that Tori was playing solo without a lot of accompaniment as in her later concerts made these two all the more intimate. I liked how I could crank up my stereo to fully appreciate the sonic qualities of the concerts too, reduced to the basics in most ways to better showcase her vocal quality and the material presented. I'm not nearly as big a fan of concerts over the polished/produced official releases by most performers, Tori serving as one of the biggest exceptions to that rule of thumb largely on her abilities and how she uses them so effectively. The high definition upgrade on the visuals was nice but the audio was a marked improvement over a concert I already found very good on my home theater to begin with on the SD version (I'm glad I heard that version first or I might have erroneously found it at fault by comparison).

Extras: The only extra was a paper insert with some biographical information on Tori Amos and the two concerts. I wanted more but these were so old that Tori was alleged to have forgotten about them herself until the festival organizer, Claude Nobs, reminded her last year so just getting the concerts was pretty cool (especially at this pricing point).

Final Thoughts: Tori Amos: Live At Montreux was an excellent set of concerts by a gal whose talent was decidedly not what big recording companies felt comfortable with promoting to the fullest of their public relation machines. Seen years later, the DVD appeals a lot to the part of me that appreciates her roots over the event styled concerts such as the one detailed in Tori Amos: Welcome to Sunny Florida but as a fan, I liked the presentation of Tori Amos: Live At Montreux enough that I may well pick up a number of the other titles in the back catalog. Pick up a copy of this one in high definition Blu-ray if you have the proper equipment to enjoy it but either version was an excellent tribute to a very talented young lady with exceptional musical abilities (brought out so well in Blu-ray that I would not have believed it could be better than the sweet version I appreciated previously).