Other (International) // Unrated // July 25, 2008 // Region 2
List Price: $38.99 [Buy now and save at Yesasia]
Review by Stuart Galbraith IV | posted December 8, 2008 | E-mail the Author
Veteran filmmaker Yoji Yamada's Kabei - Our Mother (Kaabee, 2008) might very well be his masterpiece. Twilight Samurai (Tatrsogare Seibei, 2002) is very good and was a critical and commercial success, though I'd probably put Home from the Sea (Kokyo, 1972), A Distant Cry from Spring (Haruka naru yama no yobigoe, 1980) and possibly A Class to Remember (Gakko, 1993) higher on that short list of contenders. Director-screenwriter Yamada is perhaps most famous in Japan for the long-running Tora-san film series (1969-1993) but that's in a category all by itself.

Kabei - Our Mother is a film that probably won't get a lot of attention outside Japan. It's not flashy, and it doesn't have the samurai and swordfights of Yamada's last three movies. And yet it's one of the most daring, bitter, and political Japanese films in a very long time, the kind of film that is almost impossible to make now in Japan, and of a type that may not be possible at all after Yamada, Oshima, Shindo, and others of their generations gradually fade away.

The movie is based on a childhood memoir by Teruyo Nogami, who was Akira Kurosawa's longtime script supervisor and close collaborator. In Kurosawa's hands the movie probably would have been too direct, too abrasive. Nogami and Yamada express everything they want to say, but understatedly, diffusing controversial aspects by telling its story in muted tones, and through a traditional mother character played by the uncannily beautiful Sayuri Yoshinaga, a woman as much the Japanese ideal as Audrey Hepburn was everywhere in the world.

Cleverly disguised as a hahamono, the singularly Japanese tearjerker genre about self-sacrificing mothers, Kabei in fact is hugely critical of wartime policies, not just the militarists in charge but how nationalism spreads like a cancer to all facets of society, destroying everything, ruining lives forever. What it has to say must have come as a great shock to many Japanese who bought tickets to see it, or who have been renting it from their corner video store. And, I suspect, that's precisely why 77-year-old Yamada, 81-year-old Nogami, and 63-year-old Yoshinaga made this film now, to inform an oblivious generation of Japanese teenagers weaned on iPods and cellphones what their country once was not so long ago. 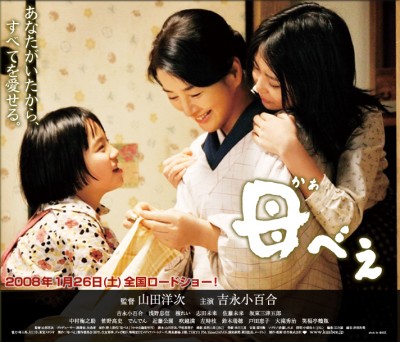 Set mostly during 1940-42, the film tells the story of Kayo Nogami (Sayuri Yoshinaga), affectionately known as "Kabei," and her two young daughters, Teruyo (Miku Sato) and Hatsuko (Mirai Shida). One predawn morning the girls' father and Kabei's husband, Shigeru (Mitsugoro Bando), a left-wing and possibly communist literature professor, is arrested and thrown into prison for "thought" crimes. It's never clear what he's allegedly done, though in one scene he's yelled at for referring to Japan's actions against China as a "war" instead of its officially preferred term, "crusade."

Without a husband to support them, Kabei and her daughters struggle to survive as wartime shortages worsen and the everyday climate around the community becomes ever more oppressive and threatening. All the while they try, mostly without success, to make arrangements to visit Shigeru and find some way to get him released. One of his devoted students, the intellectual but socially awkward Yamazaki (Tadanobu Asano), eventually comes to the Nogamis' rescue, while Kabei's sister-in-law, art student Hisako (Rei Dan), stays with the family to help out.

However, most Japanese-made war movies tend to show how its aggressively militarist government, especially in waging war against America, all but destroyed Japan and its people in the process. The average Japanese citizen, so the thinking goes, was the victim of an out-of-control government that went too far. Some films hold the Japanese more culpable than that, but Yamada's film goes considerably further. It makes the convincing case that Japan's militarism, the hysterical nationalism, and the deification of the emperor profoundly permeated and affected daily life for all Japanese, in every facet of society. There was virtually no escaping it.

In Kabei - Our Mother, the threat isn't the generals: it's the policeman down the street sitting menacingly in the local koban (mini-police station) who might throw you in jail on a whim, or busybody neighbors whipped into such a nationalistic frenzy they accuse young women of being unpatriotic simply because they're wearing lipstick, or men of being outright traitors because they're reluctant to donate their gold jewelry to the war effort. In one scene, the family is summoned to a pricey ryokan (Japanese inn) by Kabei's right-wing police chief father (Umenosuke Nakamura). There, the police, soldiers, and other authority figures gorge themselves on beef sukiyaki as Kabei's children and millions of others suffer from malnutrition.

Kabei can do nothing except act the role of the devoted, ever-polite Japanese wife. During a rare visit with her husband, the police officers all taunt her and her husband about what a loser he is, how she's still pretty and should divorce him and find another man. All she can do is smile politely and respectfully bow over-and-over. When she finds work at a local school and attends the neighborhood committee meetings, she has no choice but to join in and sing patriotic songs and express her loyalty to an emperor who for no good reason condemned her husband to a life of misery. When Teruyo angrily strikes a police officer mistreating her father, Kabei has no choice but to harshly punish the child, no matter that she'd like to hit him herself.

More than 60 years after the war's end, Japan is still agonizing over its role and culpability. Though it's fair to say most Japanese are aware of and accept its military aggression and human rights abuses, many do not while younger Japanese are simply ignorant of history. Worse, there are a substantial number of genocide deniers, some in prominent positions of authority like Toshio Tamogami, the Air Self-Defense Force's 60-ish Chief of Staff - until he was forced to resign last month, after writing an essay insisting that Japan was not an "aggressor nation" during the war and that the Japanese brought "prosperity," not "brutality," to the people of China, Korea, and Taiwan.

In such a climate, a movie as unflinchingly honest as Kabei - Our Mother is increasingly rare if not near extinction. Near the end of his life Akira Kurosawa often said movies he made in the more permissive early postwar period, especially Ikiru and The Bad Sleep Well, couldn't be made any longer. In a few years, the same may also hold true for Kabei, which likely got made only because of Yamada's commercial and critical track record.

Partly this review was prompted by another one, a write-up by Russell Edwards in Variety that's recklessly uninformed and ill-considered. Among other things he calls the film "true to" other Japan-made WWII "mellers" in the way it "sidesteps the impact of Nipponese warfare, but can always find time to reflect on Western atrocities." Huh? The depth of the ignorance here, in just 16 words, is mind-boggling. Did he see the same movie? The whole film, nearly every minute of it, is critical of Japan's wartime policies and its impact on its subjects. Western atrocities? In the entire movie, 132 minutes, there is a single line of dialogue about a character that has died of radiation poisoning following the atomic bombing of Hiroshima. That's it. What did he expect in a movie told from the limited perspective of a working mother caring for her two children? It's like criticizing Butch Cassidy and the Sundance Kid because Butch and Sundance don't spend the whole movie mourning the genocide of the American Indian.

My problems with such rampant irresponsibility is that foreign language productions like this don't get a lot of western world coverage, especially in the trades, and a single review can make or break a stateside distribution deal. If you're going to write about movies like this, you have a responsibility to at least describe it accurately.

The performances are excellent across the board, especially Yoshinaga and Asano, in an unusual role, and the two girls, who are so natural they don't seem to be acting at all. (Of course, Yoshinaga, in her early '60s, technically was much too old to be playing the youngish mother, but she effortlessly succeeds in suspending audience disbelief.) Tsurube Shofukutei is a delight in the role of Kabei's unrefined oaf of an uncle. It's like watching Tora-san from a different perspective; initially he comes off as a miserable human being, torture to be around, but as with Tora-san by the end of the film you're sorry to see him go. Actress Chieko Baisho, who played Tora-san's sister and a longtime collaborator of Yamada's, has a cameo near the end.

Like everything else, the film evokes the period accurately in an understated way that's more convincing than the CGI-filled-frenzy of movies like Always - Sunset on Third Street and its sequel. 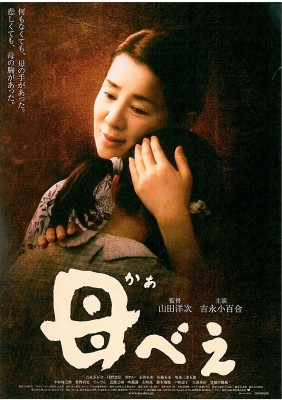 Kabei - Our Mother is a Region 2 / NTSC DVD presented in 16:9 enhanced wide screen, in a ratio of 1.78:1 that approximates the original 1.85:1 theatrical release. I'm holding out for a Blu-ray edition that will better capture the subtlety of the cinematography and production design, but until then this is a fine presentation. Audio is 5.1 Dolby Digital Surround, with an optional Dolby Digital Stereo track, also in Japanese. The optional English subtitles are good and easy to read, even though some subtleties of the dialogue are missed. Optional Japanese subtitles are also included, as well as descriptive audio in Japanese only for both the film and the DVD menu. All of the Extra Features, three trailers, all 4:3 LBX, are in Japanese only.

Some years ago there was a Japanese movie called Hachiko monogatari, a drippily sentimental story climaxing with a devoted dog and his loving master reunited in death, in the afterlife. In contrast to such over-the-top emotion, The Los Angeles Times' Kevin Thomas liked to call Yoji Yamada's movies "sentimental in the good sense" because the emotions they elicit are earned and dramatically justified. But in Kabei - Our Mother, there are no happy or bittersweet tears at the end, there are no heavenly reunions among the survivors and victims of war. As the last line of the film makes plain, there is only bitterness.