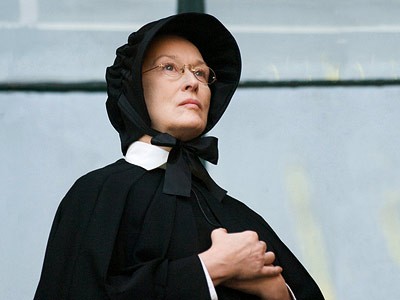 Doubt is one of those fantastic convergences of writing and acting that, even as the movie may suffer a bit from its own hermetically sealed construction, is impossible to turn away from. Watching the actors and listening to the language is a pleasure unto itself, it almost doesn't matter where the story goes.

The plot of Doubt is actually rather simple. In the mid-1960s at a Catholic school in New York, progressive priest Father Brendan Flynn (Philip Seymour Hoffman) butts heads with Sister Aloysius Beauvier (Meryl Streep), an unbending protector of tradition. In between them is a naïve nun, Sister James (Amy Adams). Harboring the seeds of suspicion placed in her by Sister Aloysius, Sister James sees things that make her think Father Flynn may be having a corrupting influence on the lone African American student in their school, a boy named Donald (Joseph Foster). When she mentions these things to Sister Aloysius, the older nun goes on a holy terror to bring Father Flynn down. He admits to nothing and denies most of the allegations vociferously, but Sister Aloysius, looking like the grim reaper with her pale face and dark habit, will not be deterred.

Writer/director John Patrick Shanley, who once upon a time wrote a little movie called Moonstruck, has adapted Doubt from his own play, and though the cramped settings and long conversations still carry the faint whiff of the stage, he makes good use of the film medium to take advantage of opportunities he would not have in live theatre. Red herrings abound in Doubt. A cutaway to a quizzical look from a child, sharp framing that obscures details, and other devices are used to create an aura of suspicion around everything. Shanley wants to pique your curiosity, to create a feeling of unease in which the viewer questions every little thing. The audience is meant to be a part of the experience and examine their own point of view. What did that facial expression mean? Why did he say what he said the way he said it? Whose side are you on and why?

The lingering suspicion is pretty difficult to shake, and I'm not going to lie, it's going to drive some moviegoers mad. The more Hoffman and Streep argue, the more obscured the truth seems to get, and there is never one complete explanation of what is really happening. Shanley has chosen every word carefully so that every viable defense makes Father Flynn sound equally guilty and innocent, and the hawkish Sister Aloysius, a staunch believer in precise verbiage, can twist any sentence back around his neck. It's marvelous writing, and within the loaded dialogue, Shanley is able to not just dissect the insidiousness of gossip, but also broach issues of faith, tradition, gender, and trust in ways that provoke without belittling religion. 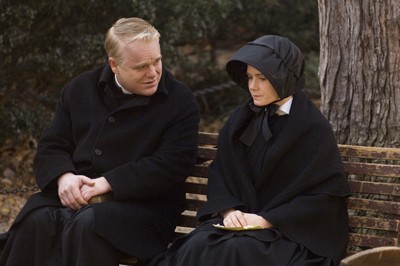 Despite being liberated from the confines of a four-cornered stage, Shanley still mounts most of the action within the cramped rooms of the school and the adjoining church. (The word "rectory" seems an unfortunate choice in this context. Call me adolescent, but I giggled.) The world of Doubt is enclosed and separate from whatever is going on beyond the school grounds, something that Father Flynn is trying to change but Sister Aloysius is tightly guarding. It allows for a marvelous symmetry, where certain parallel scenes play out in the same place. Something the priest does in one area echoes in what the nun does in that area, and vice versa. Their opposing viewpoints are reflected in everything, from how they eat dinner (the priests joke around and smoke; the nuns chew in silence) and dress (Hoffman can wear gym shorts to play basketball, but the ladies must always have their heads covered, even in bed). Yet, in action, the roles are switched. Given the religious nature of the story, Shanley is allowed to indulge in elemental metaphors that add to our questions regarding what is happening. Father Flynn seems cut off from the natural world, trying to initiate an eternal spring via the pressed flowers in his Bible, whereas the weather almost seems to react to the moods of Sister Aloysius. Her righteous anger practically conjures gale force winds, which could be interpreted as divine evidence of her being right or a bad omen of the darkness she is fomenting.

Unsurprisingly, all of the main actors in Doubt distinguish themselves in their roles. The movie is like a heavyweight bout of our finest current champions. Philip Seymour Hoffman is always good at playing slightly creepy but well-meaning men, and Meryl Streep manages to bring a Wicked Witch quality to Sister Aloysius without making her cartoony. The most inspired casting, however, would be Amy Adams as Sister James. Adams has earned her reputation playing ditzy innocents, and Shanley exploits that talent in a fashion we haven't really seen from the actress before. Sister James isn't propelled by an unwavering faith in the good of the world the way other Adams heroines have been, but rather, by the threats to that faith. In many ways, she is the greatest example of doubt in the whole thing, the one who tries to stay on the proper path even as the lingering questions maneuver to shove her off.

In the end, anyone going to see Doubt to see an accusing finger pointed and a terrible comeuppance unleashed on either deserving party will be disappointed by the film's ambiguity. On the other hand, those who don't like their moral dramas wrapped up in absolutes will love chewing over what they have seen. It's the morning after for me, and I'm still sifting through what went on, pondering the motivations and decisions of the characters, and unable to arrive at a conclusion about whose version of the truth I most believe. John Patrick Shanley's intention was to foster doubt, and in that, he has succeeded tremendously.