Okay, confession time:  I like silly comedies.  Sure, I enjoy sophisticated humor like "The Importance of Being Ernest" but give me some bathroom humor and over-the-top antics and I'll be rolling in the aisles.  One movie that falls in that category is Tommy Boy, a Chris Farley/ David Spade vehicle that may not have any redeeming qualities, but it sure is filled with dumb, silly humor.  Paramount now has released this modern day classic film on Blu-ray with a respectable transfer and lossless audio. 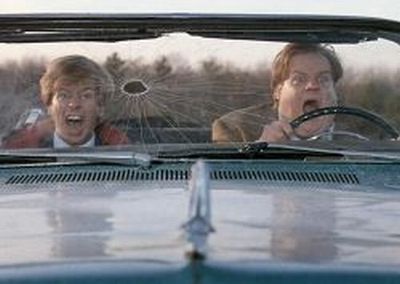 Tommy Callahan (Chris Farley) finally manages to graduate college after nearly a decade of trying by pulling out a D+ in the last class he needed.  Diploma in hand, he goes back home to Sandusky, Ohio where his father (Brain Dennehy) owns the largest, and only, factory in town that makes auto parts.  The plant is going through some rough times, saddled with a large loan that was taken out to produce a newly designed brake pad, and if the new pads don't sell the factory will close up, and the town along with it.  No one is really worried though, because the senior Callahan is a natural born salesman and is sure to convince retailers to order his new product.

That all changes when Tommy's father dies unexpectedly (at his wedding no less) and the younger Callahan inherits a large share of the company.  With the expected orders for the new part not materializing, it's up to Tommy Boy to go on the road and talk to the buyers, face-to-face.  He teams out with Richard (David Spade) who knows just about everything there is to know about the company and their products, but has a dry personality.  They take off in Richard's immaculately restored 1969 Plymouth GTX convertible to hit all of the major auto parts distributors in the area.  The two men hate each other, and neither of them can sell auto parts to save their lives, but they'll have to learn to get along if they're going to save the company. 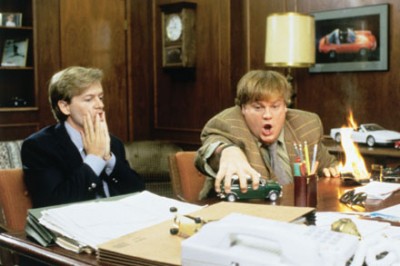 This is a hilarious movie because Farley and Spade are a great duo and play off each other perfectly.  Like all of the great comedy teams from the past, Laurel and Hardy, and Abbot and Costello for example, it's all about opposites.  Not only are Farley and Spade physically different, but their characters are also mentally worlds apart.  Richard is all book-learning while Tommy got most of his education in a frat house.  Tommy has charm while Richard is dull, and Tommy is incredibly clumsy.  The two actors play up their physical and mental differences wonderfully.  Spade's sarcastic biting put-downs are the perfect counterpoint to Farley's slapstick antics.  They have great chemistry together and when they're both on screen the movie is almost always funny.

The film is also paced well.  It starts off with some great gags showing how clumsy and not-so-bright Tommy can be, then takes a breather for some plot development.  Not too much though because as soon as you can say "Holy Schnike" the movie races off again with Tommy and Richard driving cross country in the hopes of saving their company, poor Richard's car being slowly dismantled as they go.

Presented with its original aspect ratio of 1.85:1, the 1080p AVC MPEG-4 encoded disc looks good but isn't spectacular.  The level of detail is generally good, you can see the bumps on the horns of the deer in the back seat clearly, but sometimes the backgrounds look a little soft.  The colors aren't as bright as I was hoping, looking a little dull in some scenes, but the blacks were solid.  Unfortunately there are a few specs on the print here and there but they never get distracting.  Overall this is a nice looking catalog film that, while it isn't the best looking Blu-ray disc ever, does the job nicely.

This disc comes with a 5.1 Dolby True HD track which, like the video, gets the job done adequately but isn't terribly impressive.  There really isn't a lot to this film sonically, with the dialog mainly centered on the screen.  The rears are only used sparingly with an occasional effect or background music thrown to the back of the room.  Because of that the movie isn't really enveloping, but the dialog is crisp and the music comes through with a nice range.

This release ports over all of the bonus material from the "Holy Schnike" DVD release, but unfortunately everything save the theatrical trailer is presented in 480i/p.  I guess I can't complain too much... at least they didn't leave some of the extras off.

There's a commentary by director Peter Segal which is okay.  It's nice to hear his anecdotes about Chris Farley, but there were too many times when he stopped talking and watched the film.  There are several featurettes too.  Tommy Boy: Behind the Laughter (30 min.) looks at the genesis of the film, the script, actors, etc.  Stories from the Side of the Road (13 min.) examines the improv that was done on the set and how some of those gags ended up in the final cut, and Just the Two of Us (10 min.) looks at the chemistry between the stars.  Finally Growing up Farley (7 min.) is a discussion with Chris Farley's brothers who talk about growing up with the late comedian.

In addition to that there is a series of storyboard comparisons for seven scenes, a good selection of 26 deleted and extended scenes, a gag reel (4 min.) that has some funny bits, a photo gallery and 19 TV spots.

This is a funny film, but only for those who like silly broad humor sprinkled with a few bathroom jokes.  Farley and Spade have great chemistry on screen and their antics really make this movie work.  As for the Blu-ray disc, it looks fine but this is not one of the better catalog titles to come out in HD.  Fans of the movie already have this ordered, but for the rest is comes with a very strong recommendation.