Viz, in association with Shonen Jump has released another popular anime series here in the US:  Hunter X Hunter.  Based on a manga series created by Yoshiro Togashi, the man behind Yu Yu Hakusho, I was ready to dislike this series from the start.  Don't get me wrong, I like Yu Yu Hakusho and enjoy the Shonen Jump style fighting shows, but the description of this program made it sound like a low-grade knock-off of Pokemon:  a 10-year old kid sets out in the world to meet his destiny by becoming a Hunter.  I figured that this would be another fighting series where battles last three or four episodes and the plot consists of little more than getting to the next baddie.  I was pleasantly surprised though.  While the plot is rather simple, the focus isn't on fighting.  Hunter X Hunter turns out to be a very enjoyable show filled with interesting characters and fun situations. 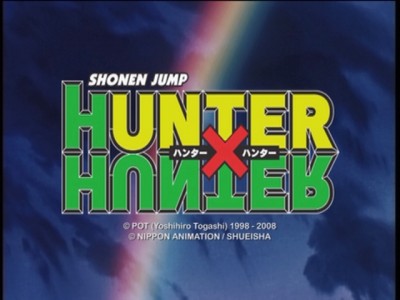 Gon is a young 10 year old orphan living with his aunt.  He's always been a bit of a loner and spends most of his time exploring the wilderness around his house.  One afternoon Gon gets entangled in some vines in the forest and almost ends up as the evening meal for a vicious creature.  Luckily a passing Humter, Kite, happens by and saves the young explorer.  They start talking, and Gon discovers to his amazement that Kite is a disciple of one of the best Hunters ever, Ging Freecss.  The astonishing part is that Ging is Gon's father.  Not only that, he's still alive.  Kite tells Gon about the yearly test that has to be passed in order to become a hunter (a vague title that is never defined very well...) and the young boy decides that he's going to become a hunter and find his missing father.

His aunt is reluctant to let him go, but after he passes a test she sets out for him, she gives him his father's fishing pole (an object that he employs to snag treasures, tie up baddies and even to catch fish) and along with Gon's innate ability to talk with animals, sets off to become a hunter. 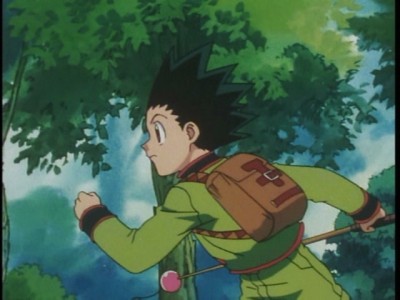 Gon soon meets Leorio, a well-dressed man who is also heading off for the Hunter exams.  Leorio claims that he wants to be a hunter so that he can make lots of money and retire early, but it comes out that there's another, more noble, reason for his wanting to pass the strenuous exam.  Though he seems cowardly and superficial, Leorio befriends Gon and the two travel together.  Gon also meets another companion, Kurapika, a young boy who is very driven to become a Hunter.

After getting past some challenges the trio finally arrives at the site of the Hunter test, along with over 400 other applicants.  As the test starts the would-be hunters fall away one after another.  While Gon and his friends manage to pass each test, they become significantly harder as time goes by.  Will Gon be able to become a hunter, and if he does will he find his father? 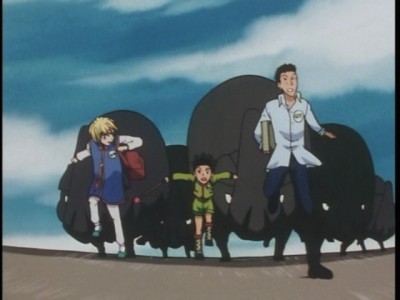 The first thing that surprised me about this show was the fact that the battle scenes were usually fairly short.  Shows like Yu Yu Hakusho would have one contest go one for episode after episode.  Here the challenges are often overcome in one installment which is a good thing.  While fights can be exciting if they go on too long they can be terribly dull.

This show is also unlike a lot of the other Shonen Jump-type shows.  It doesn't have the comedy that One Piece has, nor does it have the intricate fighting system of Naruto or the world-ending menaces that were the bread and butter of Dragon Ball Z.  This show is more character based, with some intriguing personalities.  Gon is actually the more one-dimensional character in the show.  The others have mysterious backgrounds and interesting reasons for becoming a hunter. 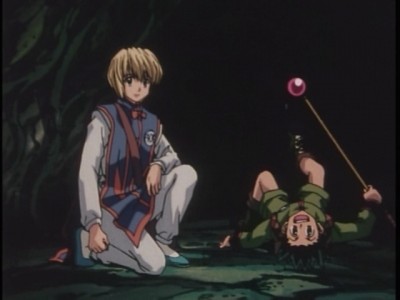 The thing I enjoyed the most about this series is the imagination it has as well as its willingness to depart from the norm.  There are several times in these first episodes where intelligence is needed to overcome an obstacle rather than brawn.  The situations that Gon or his friends find themselves in are unique and call for more than just a kamahamaha wave.  I especially enjoyed the bus that Leorio boarded to get to the final exam station.

These first 15 episodes are presented on three discs that come in a fold out book housed in a nice attractive slipcase.

This show comes with the original Japanese audio track or an English dub, both in stereo.  I alternated tracks as I often do for the first few episodes and found both languages to be very good.  The actors on both sides of the Pacific did a good job bringing the characters to life and making the show fun.  There wasn't any distortion or other common defects.

The full frame image looked good but not outstanding.  The lines were tight and the detail fine, but the colors were a bit muted in parts and there were a couple of spots on the print.  There was a slight amount of digital noise in some scenes but it was never distracting.  Overall a nice looking image, just not reference quality.

There isn't much in the way of extras.  The set also comes with some storyboards, a few trailers and some manga pages.

I was prepared not to like this series, but it won me over.  The characters are interesting and the situations fun.  I'm really pleased that it's not another battle-of-the-week show and that some of the challenges that Gon faces are mental rather than physical.  Aimed at younger audiences, this is a series that older viewers can enjoy too.  It earns a high recommendation.