Other (International) // Unrated // October 29, 2008 // Region 2
List Price: $41.29 [Buy now and save at Co]
Review by Stuart Galbraith IV | posted December 31, 2008 | E-mail the Author
When Hong Kong's Panorama label stopped releasing English-subtitled DVDs of Yoji Yamada's "Tora-san" movies in early 2007, it looked like non-Japanese speakers might never have the chance to enjoy the remaining 11 titles in the 48-film series. Perhaps realizing just how badly they had dropped the ball, Shochiku seems to have decided to reissue all 48 films to DVD in Japan. Though the entire series already has been issued at least twice before, these new versions are the first to include English subtitles. Indeed, they are among the first in Shochiku's vast home video library to offer them.

The discs are much more expensive than the Panorama DVDs, but you get what you pay for. Unlike nearly all the Hong Kong discs, these are all 16:9 enhanced widescreen from HD masters, and they include a few extras.

The availability of Tora-san Goes North (1987) is especially welcome as it pairs the iconic itinerant peddler Tora-san (Kiyoshi Atsumi) with the most internationally famous actor in all of Japanese cinema, Toshiro Mifune (Seven Samurai, Yojimbo, etc.) Director and co-writer Yoji Yamada wrote the film especially for Mifune and much of it plays off his established screen persona. The result is an utterly charming film that gives the great actor one of his last good roles. 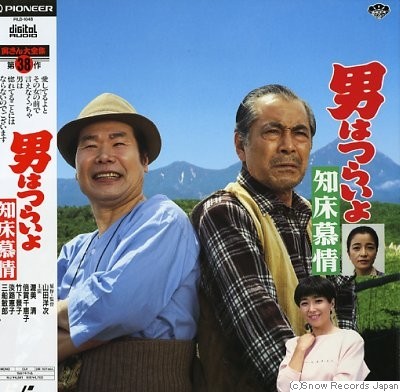 Released in Japan as Otoko wa tsurai yo - Shiretoko bojo, or "It's Tough to Be a Man - Shiretoko Longing" this 38th film opens with news that Tora-san's aging uncle (Masami Shimojo) is in the hospital recovering from a life-threatening bout of pneumonia. As a result, the family's traditional sweets shop in the old-fashioned neighborhood of Shibamata, in Tokyo, has been closed.

Tora-san returns home for a visit, and feeling a sense of duty as heir to the store, offers to help his beloved sister, Sakura (Chieko Baisho) and aunt (Chieko Misaki) reopen the shop in Uncle's absence. Of course, Tora-san is too lazy to really help; ultimately he only causes more grief for everyone, and so Tora-san flees to rural Hokkaido, in northernmost Japan.

There he meets an ill-tempered, rather disheveled old country veterinarian, Junkichi Ueno (Toshiro Mifune), bitter since the death of his wife 10 years ago and angry that his daughter, Rinko (Keiko Takeshita), married a Tokyoite and moved to the Big City without her father's blessing. Lonely, Ueno invites Tora-san to stay with him a while, and soon Tora-san is the life of the party among local residents, especially at the nearby snack bar (a kind of hostess club/bar with karaoke and flirtatious women) run by Etsuko (Keiko Awaji), whom Ueno secretly loves. (Awaji and Mifune first appeared together in Kurosawa's Stray Dog, released nearly 40 years earlier.)

When Rinko suddenly returns home unannounced, having divorced her husband in Tokyo, Ueno is mercilessly unsupportive and unforgiving. Regarded as an eccentric grouch by the locals, Ueno seems determined to destroy whatever remains of his relationship with his daughter, while his reticence with Etsuko threatens that relationship before it can even blossom.

Tora-san Goes North is funny, charming, and ultimately quite moving. Fans of Mifune will be especially delighted; from the early 1970s until his death in 1997, Mifune rarely appeared in films worthy of his talents, but this one plays off his working-class tough guy persona imaginatively. In the film Mifune's Ueno still does back-breaking work like delivering calves and is still as intimidating as the Mifune of Sanjuro and Samurai Rebellion, but here drives around in a rusted-out junker car that constantly stalls.

Yamada's and Yoshitaka Asama's script (from Yamada's original story) reveals a side of Mifune rarely if ever seen on the screen: a painfully shy, lonely man, awkwardly inexpressive, who hides his true feelings buried deep beneath a gruff exterior. The scenes with Rinko and her father trying but failing badly to communicate is almost agonizing because it plays as so authentic and recognizable. Tora-san's presence, and his ability to speak plainly if undiplomatically to Ueno, gradually melts away all the bitterness, but it's a slow process. Tora-san's character is handled with typical delicacy; there's a marvelous scene where Sakura tells of hearing Aesop's The Ant and the Grasshopper in elementary school, and how she cried upon hearing the fate of the grasshopper, who sang away the summer only to die of hunger in the winter, because its idle nature reminded her of her wayward brother.

(Minor Spoilers) The payoff, a scene where Ueno struggles to finally declare his true feelings for Etsuko, is as funny as it is emotionally powerful. Rare indeed is the film that has you laughing and shedding tears simultaneously, but this one did for me.

Tora-san Goes North has more than its share of funny scenes. Recalling Tora-san's Tropical Fever (1980), Tora-san brings cheap food (overripe bananas) for his uncle's roommates at the hospital, and tries to bribe his doctor with a bottle of whiskey, resulting in some very good slapstick. As usual for the series, the picture also functions as a kind of travelogue of Old World Japan, in this case the picturesque waterfalls, lighthouses and so forth of Shiretoko National Park.

Also reminiscent of Yoji Yamada's superb A Distant Cry from Spring (1980), the film touches upon the many hardships of Japan's rural farmers and fishermen, the joys and sorrows of their isolated existence.

Tora-san Goes North is a Region 2 / NTSC (Japan) DVD that's 16:9 enhanced to the full 2.35:1 aspect ratio (the opening titles are windowboxed) There's some paraphrasing in the optional English subtitles, but overall they're an improvement over the inconsistent Panorama ones. Japanese subtitles are also included.

Audio is Dolby Digital mono, supposedly a reflection of the original theatrical release (I'd have thought they'd be Dolby Stereo by now, but maybe not.) Japanese descriptive audio for the sight-impaired is also available on both the film and its menu screens.

The supplements are not subtitled, but included a teaser and regular theatrical trailer, which includes brief footage of the crew on location, and alternate angles of some scenes. Tora-san ga suki ("I Like Tora-san") features production photos and scenes from other entries, including references to Tora-san's adventures in this film.

Tora-san Goes North is a true delight, especially for fans of Toshiro Mifune. If you've never seen a Tora-san film, it's a good place to start (though I'd recommend starting with the first entry, to get the full impact of the series and its growth over the years). Though pricey, Shochiku deserves credit for finally providing English subtitles to this series; hopefully we'll see more of this kind of thing in the future. In the meantime, this comes Highly Recommended.


Stuart Galbraith IV is a Kyoto-based film historian whose work includes The Emperor and the Wolf - The Lives and Films of Akira Kurosawa and Toshiro Mifune and Taschen's forthcoming Japanese Cinema.