Order of Myths, The

New Horizons // Unrated // January 13, 2009
List Price: $29.95 [Buy now and save at Amazon]
Review by Chris Neilson | posted January 9, 2009 | E-mail the Author
Filmmaker Margaret Brown (Be Here to Love Me: A Film About Townes Van Zandt) claims that she didn't set out to make a film about race, or at least not mainly about race, but rather that the story emerged in the editing. That may well be true, but The Order of Myths is the most poignant documentary I've seen about race relations in America in a long time.

The native of Mobile, Alabama set out to objectively document the pageantry of her hometown's Mardi Gras. Mobile's Mardi Gras dates back to 1703, making it the oldest in the United States, so naturally its citizenry is proud of its carnival, but there's also a sense of defensiveness about it. You see, long after most of America gave up on "separate but equal" as public policy, Mobile still maintains a racially-segregated Mardi Gras.

Though the product of a liberal arts education at Brown University and NYU, Filmmaker Margaret Brown is from one of Mobile's prestigious white families; her mother was a Mardi Gras queen in the '60s. It's this background that allows her extraordinary access to the inner workings of the carnival courts and secret orders which still cherish their mysteries, while maintaining an intellectual distance from what she's observing.

Brown leaves it to the viewer to decide what to make of Mobile's racially-segregated Mardi Gras carnivals. With no narration and few intertitles, she captures the pomp and circumstance of two sets of royal courts, balls, luncheons, parades, and secret society bashes along with the personal observations of the participants, while also bringing to light some of the city's checkered racial history.

The segregated celebrations revolve around royal courts and secret societies. The white court is led by Max and Helen, college students from two of Mobile's more prominent white families. The black court is led by schoolteachers Joseph and Stefanie who bankroll many of the costs out of their paychecks.

It's a given that in Mobile some of the prominent white families once owned the city's black families, but it's particularly unsettling to discover that Helen's ancestor illegally enslaved Stephanie's and brought him from Africa to Mobile in 1859, 52 years after Congress outlawed the slave trade.

The whites interviewed by Margaret Brown typically claim that the blacks or "coloreds" as they're frequently called, prefer separate celebrations. The blacks she interviews seem more ambivalent, some seeking complete integration and others wanting something less - separate courts but one parade, or separate parades but one parade route, or even that the city government merely extend the same courtesies to the black carnival that it does to the white. The younger people talk about slowly bringing the celebrations together, but the pace of change appears glacial.

While not making The Order of Myths an advocacy film, Brown may still have accelerated the integration of Mobile's Mardi Gras carnivals. For the first time, and on camera, the two courts visited one another. Whether this would have happened without the presence of Brown's crew is impossible to say with certainty, but I doubt it. 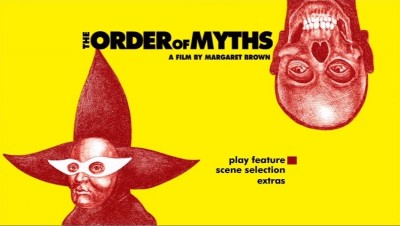 Video:
The Order of Myths is presented in an aspect ratio of 1.78:1, and is enhanced for widescreen. Sourced from HD video, the image is sometimes soft and suffers from mild aliasing, but is adequate to the purpose of the documentary.

Audio:
This release features a workmanlike stereo audio track. Forced subtitles are sometimes provided for dialogue either because the speaker is too far from the microphone, but more often because the accents are too difficult to parse. Optional subtitles are not available on this release though.

Extras:
This release of The Order of Myths features the best filmmakers commentary track I've heard in a long time. Apparently recorded shortly after completing the festival circuit, director Margaret Brown provides an excellent synthesis of all the post-screening questions and answers, while cinematographer Michael Simmonds comments on the filming from the standpoint of a cosmopolitan outsider. Other extras include an excerpt from the Q&A with Margaret Brown and some of the cast the Mobile, Alabama premiere screening (22 min); deleted scenes (25 min.); and a theatrical trailer.