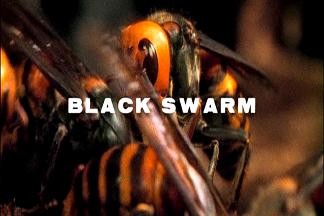 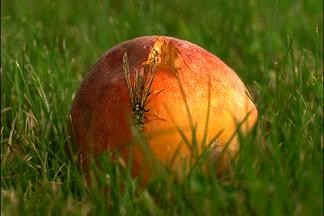 How does one go about intelligently discussing a movie involving genetically engineered killer wasps whose stings create human drone zombies? It just can't be done. Writing a review about Black Swarm, the latest Sci Fi Channel celluloid atrocity repurposed by RHI Entertainment as part of its creature feature home video collection The Maneater Series, is a tacit acknowledgement that I watched this stinker in the first place. And the fact that I'm giving it a DVD Talk - certified "Rent It" recommendation is probably the first sign of madness on my part.

Oh well. The DVD cover art for Black Swarm pretty much sums up the movie. Yes, these bio-engineered wasps - so tough that they crack windshields when cars smack into them - are on the prowl in the economically deprived small town of Black Stone. Their stings are deadly, but that's not the end of the terror for their human victims. It seems the wasps reanimate the living dead so that their young can gestate inside. This leads to a lot of bit extras stumbling around the town with fake-looking sting welt makeup on as other bit extras look on but astonishingly don't seem too concerned. Oh, and sometimes when the zombies scream, they spontaneously combust into a swarm of poorly-animated CG wasps.

Who can stop this menace? Well, there's an exterminator whose twin brother died years ago in some kind of weird wasp-related explosion (I kid you not - it's the first scene of the movie), a cute redhead sheriff who has just moved into town with her 10-year-old daughter, and a cute blonde entomologist who has a secret agenda of her own. Unfortunately, these three characters must first work out a spontaneous love triangle that emerges. The entomologist seems to like the exterminator, but the sheriff used to date him before dumping him at the alter for his twin brother who died in the aforementioned wasp explosion, but not before fathering her daughter, the exterminator's niece, who the exterminator hasn't seen in the intervening decade. And the sheriff still has the hots for this exterminator, her dead husband's twin brother.

Such complicated lives people in bad horror movies lead. The less said about the plot and character developments in the final 20 minutes, the better for all involved. 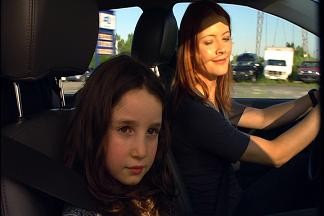 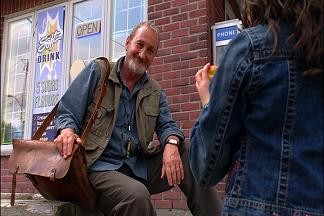 For as asinine as this sounds - and believe me it's every bit as bad as it sounds - Black Swarm does have a certain Ed Wood B-movie charm to it. A surprisingly good cast helps things out. Relative unknown Sarah Allen is a likeable and attractive lead as the sheriff, Jane. Robert Englund demonstrates why he's been a mainstay in horror movies for decades. His malevolent charm elevates the proceedings in a Bela Lugosi sort of way. Englund plays the repentant scientist initially responsible for the killer swarm, and he has a few nice scenes with Rebecca Windheim, who plays the young daughter.

In sum, I'm not sure what's more ridiculous about Black Swarm: its killer wasp human zombie menace or its unfathomably awkward love story and characters. Credit goes to Todd Samovitz and Ethlie Ann Vare for a script that treats this nonsense seriously. I have to admit that it kept my attention for 89 minutes, and that's more than can be said for a lot of other low budget Sci Fi Channel messes. Rent it if you're curious. 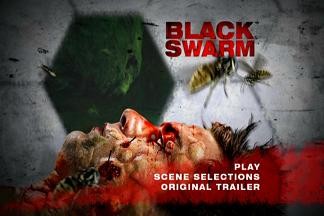 RHI Entertainment gives Black Swarm an anamorphic widescreen presentation that it claims preserves the aspect ratio of it original exhibition. I'll take them at their word for that. Colors are remarkably strong, but there's a fair amount of video noise and artifacts.

The sole audio track is a serviceable English language Dolby Digital 5.1 affair. It isn't particularly dynamic, but dialogue comes across clearly and sound effects are strong, if rather center-heavy.

Not much to speak of in terms of extras on this disc. Trailers precede the main menu for Yeti, Vipers, and The Hive. A link in the menu system provides access to a trailer for Black Swarm itself.

If you absolutely must see a Sci Fi Channel feature repurposed as a home video release involving bio-engineered killer wasps who spawn human drone zombies with their stings and starring Robert Englund, well then, Black Swarm is the movie for you. Rent it, if you're interested.