Second Run // Unrated // August 27, 2007 // Region 0 // PAL
List Price: £12.99 [Buy now and save at Co]
Review by Chris Neilson | posted February 9, 2009 | E-mail the Author
Palms (Ладони/Ladoni, 1993), an essay film by Artur Aristakisyan, is the ecstatic rant of a holy fool to his unborn son told over stark observational documentary footage of the deformed, crippled, retarded, deranged, enfeebled and destitute outsiders of Kishinev, Moldova. The 139-minute film is divided into two halves each consisting of a prologue and five chapters. The only words are those of the narrator. 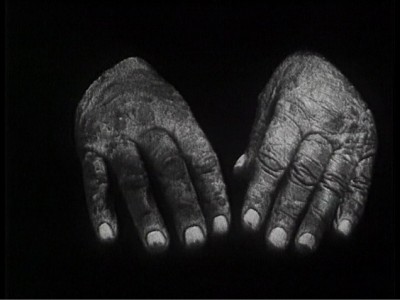 Palms is visually arresting. Shot handheld, on high-contrast black-and-white 16mm film, then blown-up to 35mm, Palms looks more like forgotten rushes from Alexander Medvedkin's Cine-Train than it does a film barely more than 15 years old. Aristakisyan shows us malnurished children and broken or unhinged adults squatting in condemned buildings, sleeping rough or begging on the streets. The footage of these pariahs is aesthetically austere, yet the effect is palpably poignant, evoking conflicting feelings of compassion and revulsion.

The unseen fictional narrator, voiced by Aristakisyan, is a holy fool who has renounced all non-parasitic traffic with the System (i.e., ordinary society) and cautions his son to do one better renouncing the temptations of both the System and the flesh: "Either a man lives in the Spirit or in the System. . . Destitution will protect you from the System, and virginity from fornication with the System." Don't be a cog in the machine; don't be a producer or consumer; disclaim sanity; leave the System nothing but your ashes -- the narrator advises his unborn, perhaps never-to-be-born son.

Presentation
Palms has been released from the UK-based boutique DVD label Second Run on a single dual-layered DVD which is PAL-encoded but not region restricted.

Video:
Palms is presented in its original aspect ratio of 1.33:1. Though the image looks time ravaged, this apparently is as intended by the filmmaker. I detected no problems with the image definitely attributable to the digital transfer. 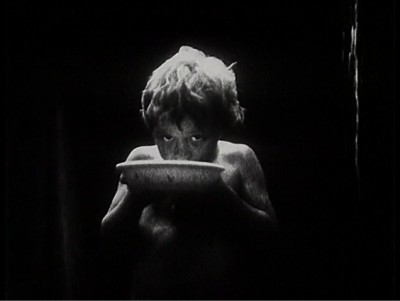 Audio:
The restored monaural Russian audio track sounds brittle, but again I suspect this is exactly as intended by the filmmaker. There's no evidence of dropouts or distortions due to the transfer.

Extras:
The extras consist of a 10-page booklet featuring insightful analysis by Graeme Hobbs, and a video interview with filmmaker Artur Aristakisyan prepared especially for this release (20:21) in which Aristakisyan is startlingly candid without regard for viewer discomfort or disillusionment. So disenchanting did DVD Times reviewer Clydefro Jones find Aristakisyan's statements that he bemoaned having seen the interview and advised his readers to skip it if they love the film. To respect the sensibilities of those of you that are inclined to heed Mr. Jones' advice I'll give fair warning that I intend to summarize Aristakisyan's statements in the next paragraph so now's your chance to skip directly to the Final Thoughts if you wish to be spared.

I suspect what Jones found so troubling was that Aristakisyan bluntly revealed that he was dispassionate about the outsiders he filmed. For him, these people simply existed as film subjects. He didn't take much personal interest in their situation and he didn't try to get them social services or otherwise try to improve their lot. Personally, I'm far less troubled by this revelation than Jones was. Had Aristakisyan felt differently about his documentary subjects, I suspect he'd not have been able to construct the narrative of the unrepentant outsider that he did: the subjects as he presents them are not victims to be rehabilitated by society; instead, they are blessed objectors to a soul-destroying system who will receive their rewards in the afterlife. There are so many documentaries aimed at improving the lot of pariahs by moving the audience to compassion; don't begrudge Aristakisyan the emotional distance needed to give us one essay film that challenges this conventional understanding of outsiders as victims with limited agency.

Final Thoughts:
Directed, filmed, written, narrated, and edited by Artur Aristakisyan, Palms is a singular achievement. It offers austerely stunning cinematography and an unconventional, thought-provoking long-form essay that aptly conveys some sense of the Eastern Orthodox reverence for the holy fool. This uncompromising film will divide audiences, and Aristakisyan's blunt statements in the extras will further divide even those that otherwise loved the film. At 139-minutes, Palms is a demanding piece of art, but for those willing to grapple with it, it's essential viewing.

I suspect the value of Palms will only grow in my estimation with time and repeated viewings. Many thanks to Second Run for another thought-provoking release. 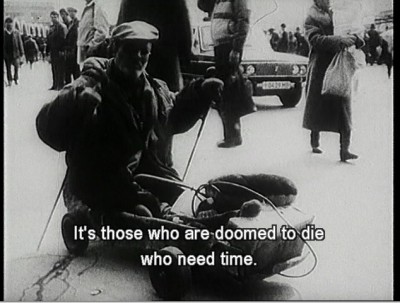