Much as it's impossible to understand the success Fahrenheit 9/11 enjoyed in 2004/2005 without considering the historic context, it's impossible to understand the appeal of Taxi Blues without putting the film in the context of 1990. The Cold War was coming rapidly to an end. Perestroika (economic liberalizations) and Glasnost (political liberalizations) were at their peak. The Soviet armed forces had withdrawn from Afghanistan. The Iron Curtain had been broken with the fall of the Berlin Wall. The Soviet Union was coming undone and would be dissolved the following year. Throughout the Northern Hemisphere people were celebrating - people in the East were quickly absorbing and emulating Western culture, and people in the West were devouring whatever information they could get about changes on the ground in the East.

To this collective jubilation and hunger for cross-pollination of culture and knowledge came Taxi Blues, a Russian tragicomedy about a tough, no-nonsense Moscow cab driver (Pyotr Zaychenko) trying to squeeze payment for a stiffed fare out of a shiftless, freewheeling jazz saxophonist (Pyotr Mamonov). In clichéd buddy-flick fashion dating back to Laurel and Hardy, the uptight tough and the shiftless wag overcome their initial animosity and mistrust to become friends. Unfortunately, the motivation of the characters is no better explained here than in a silent two-reeler and the gags are half as funny. 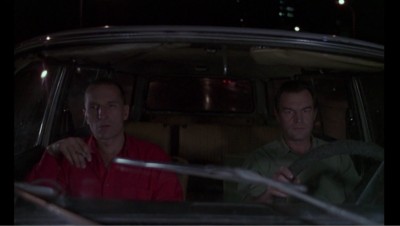 Unless we simply are to accept that Shlykov, the stony-faced cab driver, is really a nurturing soul under the gruff exterior looking for someone to mother, it's not apparent why he takes the alcoholic, self-loathing Lyosha into his home after he's already seized his saxophone which is worth far more than what Lyosha's owe him. Nor is it clear why he continues to look after Lyosha through all the improbable mishaps that follow.

Laughless comedy is intermixed with dated light jazz performances throughout, with the whole dimly-lit mess dragging on for an agonizing 110 minutes.

Presentation
Video:
Taxi Blues is presented in an anamorphic 1.66:1 aspect ratio. The image is interlaced, dark, and blurry. 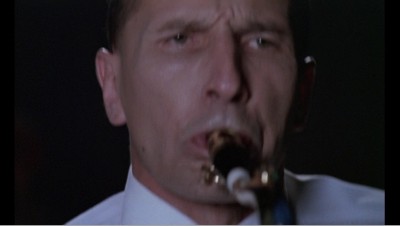 Audio:
The 2.0 DD Russian audio is flat but is free of dropouts or distortion. Optional English subtitles are provided.

Extras:
The only extras provided are a French/English trailer for Taxi Blues, and trailers for five other Koch Lorber DVD releases.

Final Thoughts:
The only value of Taxi Blues is as a time-capsule offering some insight into how a Russian filmmaker presented the Soviet Union on the eve of its collapse and how that image was received in the West. Unfortunately, as a tragicomedy or buddy flick, Taxi Blues is flat.