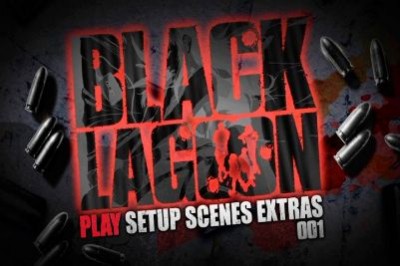 Background: In recent years there has been a shakeout of anime companies in part thanks to so many "fans" willing to download bootlegs or buy dirt cheap pirate copies rather than buck up and support the industry. As a result of this behavior, those companies stick with "safe" shows most of the time and dumb down imports to broaden the market. There are some decent shows available however but another trend is to continually repackage said shows in numerous forms to sell them time and again, just think of how many times we've seen "Cowboy Bebop" or the various "Robotech" iterations to name a few. Well, one show that seemed to hold a lot of promise for me was given very high marks by both of the DVD Talk anime experts, a show called Black Lagoon (by John and Todd) so I felt pretty safe checking out the Black Lagoon Season One Box Set when it was sent to me for review. 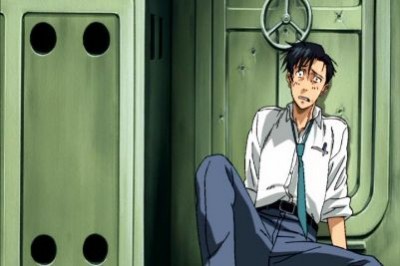 "Rock" before he grows a set.

Series: Black Lagoon Season One is the story of a hapless pencil pushing company hack in Japan named Rokuro Okajima who is sent on a pleasure cruise to deliver a package in Borneo. Given his lowly status at the company, he thinks nothing of it until a group of three pirates board the ship and takes him hostage. Led by Vietnam veteran Dutch, tech guru Benny and gunblazing nutcase Revy grab the loser and scare him to within an inch of his life, Rokuro finding out soon enough that they were commissioned to pick him and the package up for a sizable sum of money. As senseless as this all is for the guy, it is soon uncovered that they want his encrypted data disc that actually has information on it that simply cannot fall into enemy hands. The data would not only prove devastating to the company but deadly to the world at large which ups the ante considerably upon which our protagonist joins the trio with the new name "Rock". 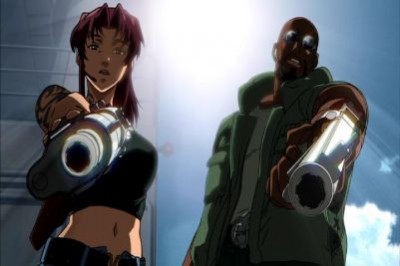 Revy and Dutch in their most prolific pose.

The quartet of antiheroes then go on a series of missions throughout the 12 episode season that shows they have a professional code of conduct much like anime fans have seen in the past, their headquarters out of a rogue island nation where everything and everybody has a price; even Rock finding out his life is on the line when Revy takes exception to the slightest of perceived insults. Her hair-trigger attitude towards the guy aside, the pirates find that they are routinely stepping into situations where unseen forces appear to be guiding them, the multi-episode arcs helping keep the stories a bit less formulaic than usual even though they rely so heavily on stereotypes of one sort or another. 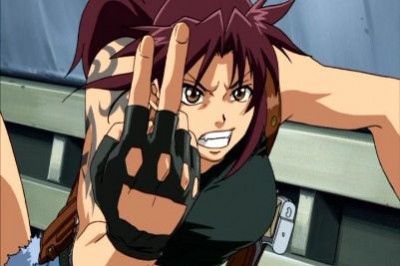 Revy was an emotional roller coaster.

In Japan, the series is called "Burakku Ragun" and subsequent seasons aside (a second is available on domestic DVD at this writing), it had a lot to like so I could see why my esteemed colleagues would enjoy it as much as they did. There was a lot of swearing, too much in the English language dub, but the stories almost all seemed to focus on Revy and Rock so there was not as much dynamic interplay between the group as a whole. She is damaged goods, a cliché if ever one existed in anime, and he is the uptight businessman that slowly comes out of his shell; using his head instead of guns to solve the problems facing them. The "buddy film" vibe between the two helped make the series a bit above average for me. The mere fact that the writers kept me guessing at least a little bit as to how the crew would react added some replay value though I'll be the first to admit that I actually liked the dub cast version better, no matter how slightly they "reversioned" it, and I'm glad that FUNimation picked up this release that Geneon originally provided, even if there was no upgrade in the newer version. 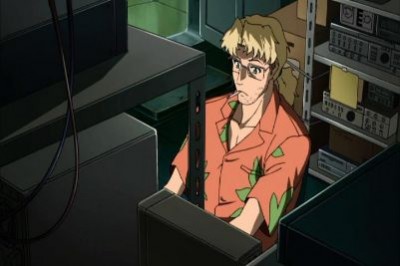 I rated the set as Recommended though if you like mindless violence with just a touch of humor and wry wit, you may appreciate it even more than I did. This was no high end anime release and had Revy been created somewhat off the beaten path I would have liked it more (Benny was even lamer so it made sense he was kept out of the show a lot), Dutch as the mysterious leader and Rock a bit better to understand. The extra disc was the same one originally released with the first of the three disc series so the minimal extras might not inspire anyone but at least it was something other than the steel case that some fans seem so infatuated with these days. Give this one a look and you should find it worthwhile if not exactly the best of the batch in anime on the current market. 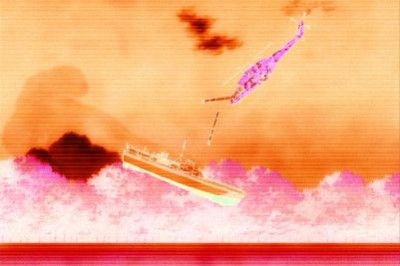 Picture: Black Lagoon Season One was presented in 1.78:1 ratio anamorphic widescreen color using the MPEG-2 codec as expected of a standard definition release. The show came out in Japan during 2006 and director Sunao Katabuchi was no novice to gun slinging anime characters but this was perhaps his first big project as director. In that sense, he proved his worth several times and while the writing might not have impressed me too much, there were many little nods to other pop culture icons that I found amusing to say the least. There was a bit of grain and edge enhancement but the detail was above average and even in the darker scenes, the show looked solid. In terms of the style used to convey the story on a subliminal level it actually worked better than the spoken word or obvious manner in which the story was displayed, the use of some "period" aging for flashbacks providing a nice touch too.

Sound: The audio was presented with three choices, the original 2.0 Japanese Dolby Digital stereo, a similar 2.0 DD in English, or an updated 5.1 DTS Surround in English, the optional English subtitles similar to the spoken word of the dub track but employing a wide variety of nuances you won't hear. I watched each version of the series and liked the dub better for some reason, my gut telling me that some scenes were altered a lot more than has been reported given the situations offered up. The sound effects and vocals were upgraded on the dub too, the separation better as was the music in most cases. The vocal casts offered up two different experiences here that personal taste will judge better or worse but even though the DTS version might not have used the 1536 Kbps bitrate to full effect, it was better than the 192 Kbps DD version or original Japanese thanks to some fine engineering on the part of the Geneon crew (that have gone their separate ways from what I understand).

Extras: The four discs were enclosed in a metal case that I liked except for the tightness the hubs held the discs. The majority of extras were on the fourth disc where it had the series song by Mell in music video form, a short Behind the Scenes for the dub cast, and some promotional material from Japan. The individual discs had trailers and DVD credits for those that care.

Final Thoughts: Black Lagoon Season One was a cute little title best suited for those of you that like hearing curse words as freely as possible, though they lost their impact pretty early on due to their overuse. The action was akin to a Hollywood flick and had some of the weaker episodes been edited into a larger whole, it could have made a pretty solid stand alone movie from my perspective. The character development left something to be desired and the animation style was mediocre but it had a lot of the "fun factor" I appreciate from better anime series so give it a look and get ready to have a lot of good times.