The Movie
I normally wouldn't feel the need to share this in a non-porn DVD review, but I think it's necessary: I'm a chest man. You might find that nugget of information inappropriate, but considering actor Buddy Dolan also wrote Point of Contact, I'm guessing he intentionally spent half of the film shirtless. It's a good thing, because without his ample chest and biceps to distract me, I might not have made it through all 89 minutes. You see, when one of the characters flatlines five minutes in, so does the film.

Initially developed as an hour-long cable television pilot, Ghost Hunters: Point of Contact was later injected with 30 extra minutes in hopes of securing a theatrical release. But its roots show--badly. There's so much padding, starting with more than eight minutes of opening "visions" before the story actually starts. It continues with slow sequences filled with sparse dialogue, more ghostly interludes and about a billion commercial-break fades. The film is about as disjointed as you would expect given it has two directors and three cinematographers (!).

After the long, loud and frenetic prologue--a clusterfuck of music video-like edits accompanied by "atmospheric" chants and an endless supply of "spooky" images--the film settles down (a little). Jake McCormick (Dolan) awakens from a 12-year coma after a prank gone wrong led to the death of friend Derrik (Michael Chadwick). While slumbering, Jake saw visions of people who may be more than just dreams. He also maintained the mind of a mathematician and (thankfully for us) the body of a professional athlete (translation: Dolan felt no need to get too into his character ala Christian Bale in The Machinist).

Jake sees dead people, and the doctors want to study his ability to lead lost souls to peace. But Jake is more interested in nurse Elaine (Mikki Padilla), who he also dreamed about--along with another woman in danger. A new nightmare soon takes control of him--the murder of the Talbot family, shot to death by their demented father/husband in a giant, creepy house.

Jake is soon joined by a group of ghost hunters that want to tap into his power and help him get to the bottom of the Taylor mystery--and stop Derrick from haunting him. His skill also catches the attention of psychic Andrea Riley (Stacey Longoria), who might have a hidden agenda. It all leads to the finale in the Taylor house, a limp payoff that left me mildly angry and confused, but not nearly enough to care.

Almost every aspect of the film is extremely amateurish--the sets are sparse, the minimal effects are cheap (look for a moving dead limb in the freezer!) and the editing is atrocious. The acting isn't as awful as it could be; Dolan and Longoria give their characters perhaps too much sincerity, ruining any chance of enjoying the film as a comedy (although Jake's slow-motion walk through a hotel lobby--complete with tough-guy leather trench coat and bad ass rocker music--almost made me snicker).

But the cast doesn't have enough skill to convincingly pull off being scared and reacting to empty space. That's a shame, because it's the only chance the film had given its bargain basement effects--including that silly dot of white light, a possessed pendulum necklace (we can see the actress moving it!) and overused Spirit Vision™ POV shots.

Point of Contact is not only confusing (half of the cast just disappears, and that's just the tip of the story's incomprehensible iceberg), it's painfully slow and boring. In addition to the never-ending fades to black, I also lost track of Jake's changing hairstyles and the time jumps ("12 years later", "One year later", "Present Day"...make up your damn mind!). They made my head spin as much as the seizure-inducing edits filled with images of green-lit ghosts and the sound of warped demon speak.

As for the ending, it's a snoozer that fails to tie anything together and will have you yelling "That's it?!" Thankfully, I'll always have Dolan's monster chest and biceps to ease my aggravation...hold me, Buddy!

Video:
You know you're in trouble when the terrible quality of the studio teaser starts off the show. While the film isn't nearly as bad, the non-anamorphic 1.78:1 transfer isn't good. The quality fluctuates with the various sources. Some of the footage is clear enough, but too much of everything else is to distracting--especially the dark scenes, which are crawling with noise and grain.

Audio:
The 2.0 track isn't as awful as the video. While some of the music isn't incorporated as smoothly as it should be, the dialogue is always clear; the audio is the least of this disc's problems.

Extras:
Just a full-frame still gallery including some behind-the-scenes pics--which offer a few more glances of Dolan's muscles. The theatrical trailer promised on the box is not here. 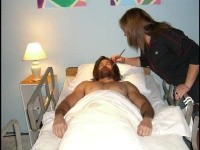 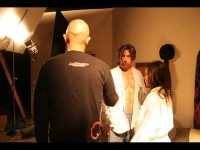 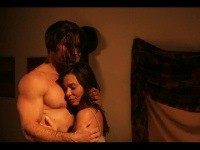 Final Thoughts:
There aren't enough stars in the world to award Buddy Dolan's biceps, chest and abs. But when those disappear in the second half, this poor man's version of Ghost Hunters, The Sixth Sense and The Ghost Whisperer collapses under its crowded, confused structure as it's made-for-TV roots are stretched into a slow snoozer of a feature. Skip It.