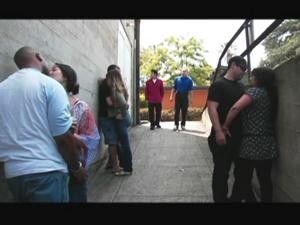 In applying to become a DVDTalk reviewer, one of my goals was to see a few more of the independent films with intriguing premises and eye-catching covers that I can't bring myself to drop $25 on at my local Borders. Yeah Sure Okay is even more obscure than those pricey question marks: a micro-budget, dialogue-free martial arts flick created by Andrew Suleiman and Larry Leong that you're only going to find on the film's official site (www.yeahsureokay.com). While the trailer inspired a little confidence, it was still a risk: just because I survived a minute-long clip reel on the internet didn't mean investing my time and effort would be rewarded.

For Red (Suleiman) and Blue (Leong), a pair of roommates identified by their shirt colors, love is a kick in the stomach. Red is a wanna-be lothario who attempts to pick up every woman he sees, whereas Blue is still devastated over losing his most recent ex-girlfriend (Tiffany Reyes). It's impossible to get away: wherever they look there's either cutesy infatuation or kung-fu devastation. Their struggles reach a boiling point when they both fall for the same beautiful woman (Carla Greene) and they find themselves fighting off other potential suitors (Kerry Wong, Pablo Porras, Mike Wilson and Lateef Crowder), a mysterious, villainous protector (Sam Looc) and each other.

It hadn't occurred to me prior to watching Yeah Sure Okay how useful it might be for penniless filmmakers to shoot a silent film. You no longer need sound equipment or people to operate it (and don't have to worry about planes, wind or cars ruining a scene), but it also makes it easier to write and simple to perform. As Red and Blue, the creators of the film aren't required to do any real acting, they just have to make sure the audience understands what's going on in great big broad strokes. It's one of the most clever cost-cutting measures I've seen in a low-budget film in some time. 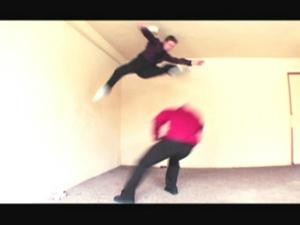 Anyone who stumbles upon the film and decides to watch it, however, will be watching for one reason alone, and that's the fight sequences the film's built around. Rest assured that not only are they highly entertaining, well-choreographed and plentiful, but they're a breath of fresh air amongst Hollywood's obsession with quick-cut, shaky-cam nonsense. Larry Leong's direction is generally kinda goofy, but he knows how to shoot a fight scene, as these are all easy to follow and placed in the hands of a whole group of capable, professional stunt performers. Admittedly, the arrangement of several of these scenes back-to-back in the middle of the film makes it start to feel more like a demo reel than a feature film, but this stuff is fun, so I'll let it slide.

If there's anything wrong with the movie, it's that there's not much meat on the bones. As it stands, Yeah Sure Okay should probably run about 60 minutes, but it runs 20 minutes longer. While I wasn't bored during the movie's excessive padding, I wasn't excited either. My advice: take a cue from British director Edgar Wright, of the smash hits Shaun of the Dead and Hot Fuzz. One of my favorite parts of the latter film is how much visual and aural exposition Wright packs into every frame, cut and sound effect. It's a crash course in comic silent filmmaking, and I'd like to see YSO's stunt team, nicknamed "Zero Gravity", improve on the formula with future efforts.

It's always a risk picking up the mega-indies. With any distributed feature, you have the assurance that anywhere near a hundred or more people saw the final product and had their two cents put in before it arrives in the hands of the unsuspecting viewer, but with a project that only amounts to a few notches above home movies, the creators have nobody to answer to except themselves. Luckily, the makers of Yeah Sure Okay are a skilled bunch that know what they're doing, and I wouldn't be surprised to see them pop up on the big screen sometime in the future. 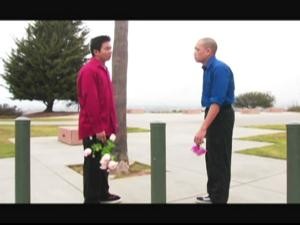 The DVD
My copy of Yeah Sure Okay came in a standard black case with a paper cover with no insert. It looks pretty solid for an obviously homegrown DVD. The menu is simple enough, which is good: even some well-known low-budget DVD companies like Troma have the bad habit of creating overly cluttered menus.

The Video and Audio
Yeah Sure Okay was shot using home video cameras, and, well, this non-anamorphic 1.85:1 transfer looks the way you'd expect: like a feature-length YouTube video. Mosquito noise consumes the inside of a dark bar, a fair share of digital artifacts show up, colors vary wildly (Red's shirt turns distractingly purple in one scene), motion is blurry, detail is sometimes fuzzy, and outdoor scenes run hot. The aspect ratio even changes once. Given the roots of the film, though, none of this is surprising, and it's easy to accept. The audio is a shade more disappointing. Some of the kick-punch sound effects could have been beefed up, given that there's not much else going on, and a bit of popping and crackling also occurs during one particular scene. Since there is no dialogue, captions are neither necessary nor provided.

The Extras
The packaging states that two audio commentary tracks are included, one with Andrew Suleiman and the other with Larry Leong, but a note in the case reveals that only Leong's was ever recorded. The real question is why the two of them weren't recorded together, as the remaining solo track is only mediocre. Leong has some amusing stories (his list of martial arts plot devices he's tired of is hilarious), good information about the performers and their styles, and advice on making a either dialogue-free film or a no-budget picture, but there's also lots of silence and a tendency to just list people's names that might have been solved with the presence of his co-star. 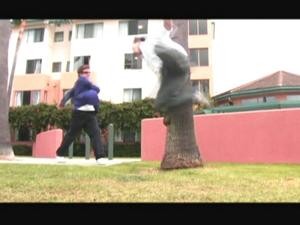 The other major extra is an entertaining little behind-the-scenes featurette (6:27) which includes plenty of outtakes, alternate stunt takes and goofy B-roll footage from the shoot that highlights the on-set atmosphere and the piecemeal way the action sequences are filmed. It's sad how many EPKs on DVDs for Hollywood films aren't as amusing as this.

A photo gallery and trailer are also included.

Conclusion
Looking at the official website, it says that Yeah Sure Okay can be had for ten bucks plus shipping and handling. For martial arts fans and future stuntmen, I'm happy to recommend it, and perhaps it will inspire a few people to take a shot putting together a project of their own.