Other // Unrated // February 3, 2009
List Price: $19.98 [Buy now and save at Amazon]
Review by Chris Neilson | posted March 5, 2009 | E-mail the Author
Fat Head concludes my binge reviewing of diet advocacy DVDs which started with the raw vegan docs Simply Raw: Reversing Diabetes in 30 Days and Raw for Life: The Ultimate Encyclopedia of the Raw Food Lifestyle, followed by the conspiracy doc Killer at Large which indicted the federal government and big business for complicity in an obesity pandemic. Fat Head nicely rounds out the set by incorporating the zealotry of the raw food docs with the hysteria of Killer at Large to advocate for a high-fat diet while pinning the blame for heart disease and obesity on low-fat recommendations endorsed by the federal government. 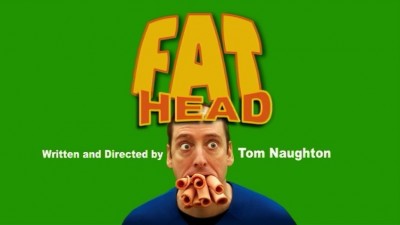 Written, directed and edited by Tom Naughton, a sometime club-circuit and cruise ship comedian, Fat Head advances two aims: to rebut Morgan Spurlock's 2004 documentary indictment of McDonald's fast food, Super Size Me, and to promote a high-fat diet. Toward this end, Naughton goes on a 30-day fast-food diet, but with the caveat that he will limit his intake of carbohydrates to around 100 grams (400 calories) per day, limit his total daily caloric intake to around 2000 calories, and increase his exercise from 15 miles of brisk walking to 30 miles per week.

The biggest weakness of Fat Head is Naughton's selective presentation of information. The problem is first evident during his pre-diet medical checkup. Naughton's numbers indicate that he's 5'11, 206.5 pounds, has a body fat percentage of 31.2, a total cholesterol of 231 and an HDL (good cholesterol) of 61. Naughton tells us that based on his body fat percentage he's regarded as obese. He then goes on to rail against the widely used Body Mass Index, one simplistic measure of obesity which considers only height and weight, without regard for body composition. Naughton fails to correct the inference that according to his BMI he's obese. In fact, using the BMI scale, Naughton isn't obese, though he is under the generally better regarded body-fat standard of measure.

Naughton also selectively edits out discussion of his LDL (bad cholesterol) both in his baseline and in his final checkup. From the information he does share we can determine that his starting LDL was 170 (231 total cholesterol - 61 HDL = 170 LDL) which is regarded as high risk for heart disease and stroke by the American Heart Association. Because Naughton only supplies his total cholesterol at the end of the diet, we cannot determine whether his LDL levels improved or worsened on the high-fat, fast-food diet, though it's probably safe to assume that if they improved he'd have been glad to share the news.

Though Naughton freely admits he only completed 28 days of his diet you have to go to his website to find out that he undershot his caloric target of 2000 calories on 22 out of 28 days, and relied on outside food to supplement his restricted fast-food fare. There's also no discussion of micronutrients (vitamins and minerals) in Fat Head so though we know that Naughton reduced his weight and body fat by his high-fat, fast-food diet, we can't easily infer whether the diet was sustainable over time. Unsurprisingly, through caloric restriction and increased exercise Naughton lost 12.25 pounds and reduced his body fat by 3 percent during the 28 days.

It's debatable to what degree Naughton's mostly fast-food diet repudiates the conclusions drawn from Morgan Spurlock's McDonald's diet that frequent fast-food dining contributes to poor health outcomes. Spurlock matched his exercise level to that of the average American and restricted his diet to only foods available at McDonald's, whereas Naughton increased his exercise level to several times that of the average American, dined at a wide variety of fast food franchises, and selected uncommon food options (e.g., no French fries, no caloric drinks, and plenty of salads).

Beyond attacking Morgan Spurlock's claims about the dangers of overdoing fast food, Naughton also goes after the federal government for promoting a low-fat diet. Naughton marshals anti-vegetarian wonks, low-carb diet book gurus, and civil libertarians to address at length the origins of the government's low-fat recommendations. While much of this information is interesting and no doubt correct, Naughton again undermines his credibility by selectively presenting the data. For example, in attacking the USDA's food recommendations, Naughton presents the old Food Guide Pyramid, never mentioning that the USDA withdrew it in 2006. Naughton and his experts further tell us that pre-agrarian mankind thrived on high-fat diets compared to protein-starved early agrarians, but neglect to even suggest that high-fat diets produce life expectancies that match those of modern moderate or low-fat diets, presumably because there's no evidence that they do.

Finally, though Naughton goes to great pains to argue that weight change is not a simple measure of calories consumed minus calories expended, his own dramatic weight loss on a low-calorie, intense-workout diet doesn't further his argument.

Presentation
Video:
Fat Head is presented in an anamorphic 1.78:1 aspect ratio. The image quality is above average for DV with better than expected color and contrast, but some aliasing and soft focus.

Audio:
The 2.0 audio sounds fine with dialogue and music coming through clear and nicely mixed. No subtitle options are provided on this release.

Extras:
The extras consist of 38 minutes of additional interviews with the experts.

Final Thoughts:
Although Naughton frequently seems dodgy in his selective presentation of the facts in support of his twin arguments that fast food corporations aren't to blame for obesity and that a high-fat diet is preferable to a low-fat diet, Fat Head is still worth a look because it presents a challenge to the diet orthodoxy too little heard in the mainstream media and too infrequently debated in the public arena. 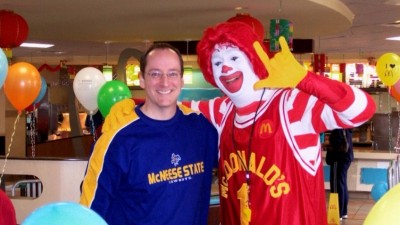