Pegwarmers: The Geeks Shall Inherit the Earth 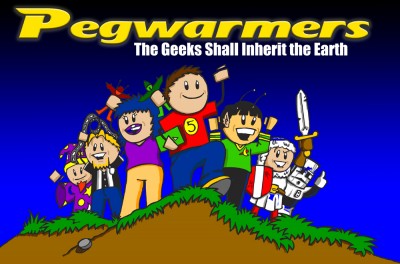 Pegwarmers, as defined in this documentary, are the action figures nobody wants. They're the plastic personalities that are left behind to gather dust while their more popular, exclusive brethren are snapped up quickly. It's a geek term finding an ideal home in this exhaustively geeky movie. Lovingly prepared and quick to charm, "Pegwarmers: The Geeks Shall Inherit the Earth" is an affectionate ode to the less esteemed pop culture pursuits, returning some dignity to those brave few who boldly go; individuals who take on sci-fi and fantasy pursuits in the face of disdain, eventually finding a safe haven in the company of other like-minded enthusiasts.

"Pegwarmers" isn't a marathon take on geekdom, hunting a single concern through the ups and downs of derision and acceptance. The documentary utilizes vignettes, breaking down the genre fixations into 5-10 minute batches of discussion for both easier digestion and perhaps to avoid the sugared toxicity of the subject matter. Being a Canadian production, "Pegwarmers" is an affable, thoughtful feature, approaching topics of toy collecting and costuming gratification with a mind to celebrate the diverse achievements of the interviewees, while basking in the often powerful glow of their nerdly pursuits. "Pegwarmers" doesn't judge, it encourages, giving face time to those who are often mocked for following their bliss, allowing them to explain their obsessions and explore their lifestyles.

Director Jason Hoehn assiduously arranges a circular narrative pathway for "Pegwarmers" that begins and ends with all things Sith and Sandtrooper. Yes, "Star Wars" is the primary focal point for the picture, and cameras descend on the supporters of the expansive Lucasian mythmaking machine. Actually, the concentration is directed more on the collection (or hoarding) of merchandise, riding along with a group of fans as they scour the Great White North for figures and accessories to pile up inside their increasingly claustrophobic homes. Almost immediately "Pegwarmers" uncovers a star in Dave "Redeye" Kho, an agreeably goofy guy with lively camera awareness who bestows the documentary with an idyllic dab of humor and a profusion of hilariously fizzy fandom that accurately sums up the brighter side of sci-fi infatuation. He's a hoot rummaging around his prized possessions, showing off a jam-packed space of collectibles and treasures his mother has dubbed the "you're gonna scare the girl away" room.

Where "Pegwarmers" excels is creating a splendid sense of community, conjuring the convention atmosphere as Hoehn visits the booths and tables at spirited Canadian gatherings to pick brains and ogle the merchandise. Most participants open up easily to the camera, honest about their financial intentions and hopes for future generations of collectors. The film even provides a needed overview of seller lingo, which was Chinese to me before this documentary, and includes a candid discussion of the corporate greed that always seems to sour the collecting pastime.

"Pegwarmers" soon moves beyond the blister pack lottery to highlight the heart of the costumers, who toil day and night on their traditionally (not exclusively - Kho has a fantastic classic Cylon outfit he saves for special occasions) "Star Wars" and "Star Trek" related outfits to strut proudly at cons and charitable functions, which ultimately underlines the critical sense of humanity Hoehn is presenting. These people might display the awkwardness and dismissive self-awareness of social outcasts, but they take a certain pride in their subculture, with many extending themselves to the betterment of the world out of the goodness of their hearts, and, while unsaid in the documentary, because little kids are always impressed with the garb.

Soon "Dungeons & Dragons" enters the fray, along with medieval recreationists who battle with swords and shields at the local park for the love of a fair maiden. It's a snapshot of classic 20-sided geek tendencies, who long for the days of yore. Also placed into the film's final act is a visit to Vulcan, Alberta, where the locals have turned the town into a "Star Trek" tourist trap, with Enterprise theming everywhere to catch the eye of the average interstate traveler. Enjoying the annual "Spock Days" to celebrate the franchise, the town is a fantastic example of communal enthusiasm and remains the highlight of "Pegwarmers," if only for the rare opportunity to spy a pastor describe how his homemade Klingon outfit came to be. You don't see that every day.

Assembled on a tiny budget, the "Pegwarmers" DVD encounter is fairly sedate, maintaining a pleasant anamorphic widescreen (1.85:1 aspect ratio) image. The film was shot on video, so colors are well represented, with a healthy visual consistency visible throughout the film. A modest presentation, but a comfortable one.

The 2.0 Dolby Digital mix is a straightforward affair, with concentration on keeping the interview audio crisp and easily discernable. No real flair, but a dependable documentary mix.

If you adore Canadian accents even half as much as I do, the feature-length audio commentary with director Jason Hoehn, and stars Dave "Redeye" Kho and "Jedi" Jeff Jobb will satisfy immensely. Toss into the mix appealing production info and a healthy sense of humor about the subjects, and it adds up to a rewarding track. Hoehn is eager to explain his motivations and his multiple filming locations, developing the "Pegwarmers" world even further with his insight. Kho and Jobb provide needed geek perspective, while helping lighten the mood with their quips. It's a jovial track and often unexpectedly sidetracks into an audio book of Canadian collectible hotspots.

"Pegwarmers: The Geeks Shall Inherit the Earth" imparts a clear-cut report on the state of the geek, and I appreciated the documentary's interest in a wide range of topics and faces, lending some personality to a typically shortchanged topic. The picture has a torrent of fondness to offer the geek world, and it portions out the attention in perfect bite-sized batches to easily absorb the good-natured pastimes of the fans and their indefatigable effusions of Jedi-smudged love.

Learn more about the film at www.pegwarmers.tv