Acorn Media // Unrated // March 10, 2009
List Price: $119.99 [Buy now and save at Amazon]
Review by Stuart Galbraith IV | posted March 6, 2009 | E-mail the Author
Cracker (1993-96, 2006) is an outstanding crime series, one of the best ever. Some have described it as a response to the better-known, more internationally acclaimed Prime Suspect shows with Helen Mirren, but while their emphases vary - Mirren's series being more a police procedural, Cracker more a psychological study - they share many of the same fine qualities; both are superb, and they're more alike than different. Cracker stars Scottish actor-comedian Robbie Coltrane (better-known these days as Rubeus Hagrid in the Harry Potter movies) as Eddie "Fitz" Fitzgerald, a heavy-drinking, chain-smoking forensic psychologist, a character not far removed from the greatest detective of them all, Sherlock Holmes. Both are extreme antisocial types with brilliant minds like racing trains; bored between cases, they self-destructively turn to addictions. Created and chiefly written by Jimmy McGovern, Cracker is positively overrun with interesting leading, supporting, and guest characters, while the crimes dramatized are psychologically authentic and often based upon or incorporate real-life events.

Acorn Media's boxed set includes all 23 original episodes (11 story arcs, told in two- and three-part shows), plus the two subsequent TV movies, produced in 1996 and 2006. Also included is a 45-minute documentary about the series created to promote the 2006 TV film. 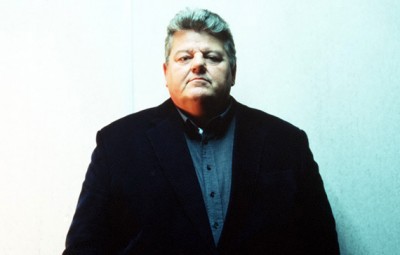 Fitz is a brilliant man but a failure of a human being. Beyond smoking and drinking himself into an early grave - in one episode the obese Fitz, after apparently suffering a heart attack, confesses to an appalled emergency room doctor that he consumes 6-7 bottles of whiskey per week while smoking three packs a day - Fitz's biggest failing is his gambling addiction, which has all but destroyed his marriage to Judith (Barbara Flynn), with whom he's usually impotent, and relationship with his teenage son, Mark (Kieran O'Brien) and daughter.

Fitz's one saving grace is his intellect. As a forensic scientist, he has a huge gift for "reading" people, helping police create startlingly accurate profiles of wanted rapists, terrorist, and murderers, and he's able to expertly assess and breakdown a suspect during an interrogation.

This intelligence also serves him well in an argument - when one detective incessantly calls Fitz's theories "bullocks" Fitz pithily replies, "You need to get yourself a Thesaurus." Despite his immense girth and constant stench of tobacco, women are attracted to his dark wit and flashes of unusually powerful sensitivity, though his self-destructive nature invariably steers these relationships into a kind of "emotional rape," as one would-be lover calls it. He has an almost uncontrollable need to rip into the emotionally vulnerable, and the cost he pays for this is high indeed.

Coltrane is superb in this series. In one early episode Fitz sits with a mother whose boy was recently murdered and they have an intense conversation - with Fitz talking about how in these situations parental guilt and grief go hand-in-hand. Coltrane is totally mesmerizing here, as he often is in this series, the kind of performance that totally sucks you in to the point where you're not so much watching a TV drama as experiencing it, sitting inches away from the forensic psychologist and grieving mother.

Another fascinating aspect of Cracker is the way it humanizes its serial killers and other abhorrent types, no matter how brutal and horrifying their violent acts may be. In Fitz's words, their actions become "understandable, not justified." One of the best Crackers involves an apparent skinhead, Albie Kinsella (Robert Carlyle), wanted for the murder of a Pakistani shopkeeper. (Mild Spoilers) But it turns out to be far more complicated than that: a fan of the Liverpool Football Club, Albie and his father were witness to one of the great tragedies of professional sports, the Hillsborough Disaster, in which 96 fans were asphyxiated and crushed in a mass panic during Liverpool's game with Nottingham Forest. Later on, his father got cancer and during chemotherapy before his death lost all his hair which, rather than racism, prompted Albie to do likewise. Following his father's ignominious death, rage at their collective suffering prompts Albie to rationalize his first killing. He plans to avenge the 96 in a murder spree focusing on the police and The Sun tabloid newspaper (owned by Rupert Murdoch) that essentially blamed the victims.

The 2006 Cracker is similarly complex and political, and likewise draws on current events in its story of an American stand-up comedian murdered by an anti-American British policeman, angered that Bush's "war on terror" has marginalized fellow policemen who died in their struggle against the IRA in Northern Ireland.

Cracker abounds in strong, three-dimensional characters and performances. Christopher Eccleston, later the star of the first revival of Doctor Who, plays DCI (Detective Chief Inspector) Bilborough in a series of early shows, a family man constantly at odds with Fitz, while Geraldine Somerville is equally fine as a young woman on the force, strong and assertive but vulnerable to men who'd take advantage of her. Also good is Lorcan Cranitch as a DS (detective sergeant) constantly at odds with Fitz, with major loose cannon issues.

It's Barbara Flynn as Fitz's wife who makes the strongest impression; she doesn't exactly put up with his crap but never quite walks away from it, either. By the time the 2006 TV rolls around she's reach a kind of semi-acceptance of Fitz's failings, to a point. They make a fascinating and believably real couple.

Cracker - The Complete Collection presents all 22 1/2 hours worth of the series to date on 10 single-sided, dual-layered discs in book-like packaging where the discs slide out of cardboard sleeves. The series has very good stereo sound; the 1993 shows were among the first to boast Dolby Surround, with the logo prominently displayed in the opening titles. Most of the shows are 4:3, per their original screen shape, but the last one is 16:9 enhanced widescreen. The series offers SDH subtitles, though only closed-captioning on the 2006 TV-movie.

The nearly hour-long documentary Cracker: Behind the Scenes, was made to promote the 2006 film but covers the entire series with clips and interviews with most of the principal cast and creative crew, though it is full of spoilers and best watched after seeing the entire series.

For this reviewer, Cracker has been a major surprise, a top-notch crime series/psychological drama far better than expected. No wonder there was an attempt, feeble though it apparently was, to remake the series for U.S. audiences, and a push for another series of Cracker episodes in the next year or two. I dearly hope that happens: Cracker is a great series and, as packaged here, gets an enthusiastic DVD Talk Collector's Series rating.