Baron - The Complete Series, The

Koch Vision // Unrated // March 10, 2009
List Price: $59.98 [Buy now and save at Amazon]
Review by Stuart Galbraith IV | posted March 22, 2009 | E-mail the Author
Although British television producer ITC's The Saint and Danger Man/Secret Agent are fairly well-known to American audiences, The Baron (1966-67) is virtually forgotten despite the fact that it had an American star, actor Steve Forrest, who later found lasting fame on shows like S.W.A.T. and Dallas. Sort of a cross between a '60s spy show and a hard-boiled detective series (note the retro packaging, like a pulp-novel) and filmed in ITC's extremely polished house style, its release is a happy surprise. If you're a fan of Danger Man or The Saint, chances are you'll really enjoy this, too. 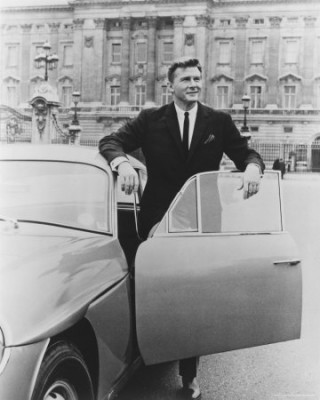 Very loosely adapted from the books of John Creasey/Anthony Morton, The Baron is the nickname given John Mannering (Steve Forrest), a Texas-born, London-based dealer in extremely rare antiquities, and something of a celebrity in this regard. In the first episode, Mannering becomes an informal, occasional agent for the British Diplomatic Intelligence, and like Danger Man some episodes have him traveling to far-off (always fictional) Iron Curtain countries (and always played by the Elstree Studios backlot) on assignments related to the rescue of some priceless historical artifact. Oftentimes however the spy angle plays no part, with other episodes dealing with million-pound swindles, conventional murders involving rare antiques, and other mainstream crimes.

In some of the early shows, Paul Ferris played Mannering's able assistant, David Marlowe. However, ITC's expensive shows relied on overseas sales, particularly to America, and the ABC network expressed their preference for actress Sue Lloyd, who guest-starred in the pilot and had recently starred opposite Michael Caine in The Ipcress File (1965). Lloyd had played BDI agent Cordelia Winfield was brought back as a regular, while Ferris gradually disappeared. Maybe ABC desired an Avengers-like synergy, maybe they felt a show featuring two men running an antique/fine arts shop was suggestive in the wrong ways (note Peter Wyngarde's commentary below), but in any case Lloyd is more appealing than Ferris, though in most shows Forrest's character totally dominates the proceedings.

Steve Forrest may be no Patrick McGoohan, but neither is he the uncultured square-jawed Texan, for years the British stereotype of American men, that you might expect on a series like this. In fact Forrest is terrific: of all the American-born leading men to try their hand at '60s spy shows and movies, Forrest is among the most believable and appealing. He's rugged but also intelligent and, most significantly, observant and understated. He's hip without straining to be so, charming around women but a gentleman instead of a cad. He can be mean and tough like Mike Hammer when the situation calls for it, but he's more apt to use its wits than his fists.

The spy show elements are slight, but they're there. Mannering's got a high-tech closed-circuit video security system and is up on all the lastest mini-tape recorders and miniaturized cameras. He also drives the requisite cool car: in The Baron it's a silver Jensen CV8 Mk II sports car, which looks a bit like an upgraded Aston Martin.

Created by The Saint's Robert Baker (still with us at 93) and Monty Berman (who died in 2006 at 101!), partners who had previously produced a number of interesting genre features (The Trollenberg Terror/The Crawling Eye, The Flesh and the Fiends, The Hellfire Club), The Baron had a lot of fine talent behind it, writers and directors likewise associated with other ITC and BBC series. Script supervisor Terry Nation, for instance, had helped develop Doctor Who (he created the Daleks) before moving on to The Saint; he wrote 16 of The Baron's 30 episodes. Dennis Spooner, who wrote 14 Barons, had likewise written for Doctor Who and, after that, several Gerry & Sylvia Anderson shows produced by ITC (Stingray, Thunderbirds).

The Baron's 30 50-minute episodes are presented over eight single-sided, dual-layered discs, with three-to-four shows per. The attractive, fold-out packaging helpfully identifies what's what, also noting where the special features are located.

The Baron was ITC's first all-color live-action show, but the color here is a bit on the tepid side, rather greenish-yellow throughout, and not quite as sharp as it should be for a series filmed entirely in 35mm. It's about on par with A&E's earlier editions of The Prisoner, U.F.O. and the like; in other words, not bad but not great, either. Likewise, the mono audio (with no subtitle options) isn't as clean as it ought to be; on a few episodes, it sounds like it may have been derived from an inferior, secondary source. However, everything is perfectly watchable and the episodes seem complete and not time-compressed.

Included are several surprisingly good supplements, carried over from the British DVD release. (Correction: According to Chris-K, "The commentaries and introductions are carried over from the Australian release, put out by Umbrella, and not the British one, which I own, and is from Network.") There are audio commentaries on three episodes: the pilot, "Diplomatic Immunity," features Sue Lloyd and production supervisor Johnny Goodman, who return for "The Man Outside," where they're joined by Roy Ward Baker; Lloyd and director Cyril Frankel discuss "Something for a Rainy Day." Additionally, guest star Annette Andre provides an audio-only introduction to "Roundabout" while writer Brian Clemens introduces "The Maze" and actor Peter Wyngarde briefly discusses his role in "The Legions of Ammak," a clever show with Wyngarde in a dual role. (He explains why one of his characters, a vain actor, was redubbed in postproduction. Apparently he based his character on John Gielgud, and the American producers were worried the voice sounded too gay. The Wyngarde's second version sounds like Peter O'Toole.) All of these tracks are a lot of fun.

The Baron is a very enjoyable show and Steve Forrest is likeable and engaging, much more so than I would have expected. Slickly produced with strong casts and above average writing this series is Highly Recommended.