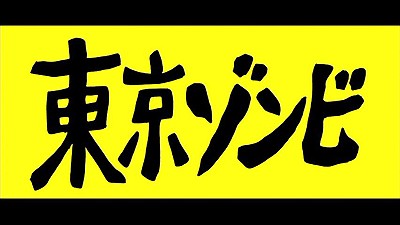 
The Movie
When I first heard about this 2005 movie earlier this year, it sounded interesting, as it was sold to me as the Japanese Shaun of the Dead. As a big fan of Edgar Wright and Simon Pegg's hilarious take on zombie horror, that was all I needed to hear to get me looking forward to the DVD release. It's also all I needed to set me up for disappointment, since that set a rather high bar to reach, and one Tokyo Zombie falls far short of.

In this adaptation of a popular manga, afro-topped Fujio (Tadanobu Asano) and bald Mitsuo (Show Aikawa) are a couple of co-workers at a fire extinguisher factory, who have more interest in practicing their jujitsu than doing their work. That's fine until they get busted by their boss, whom they accidentally kill. Fortunately for them, they live near Black Fuji, a mountain of trash where people dispose of their problems, including plenty of bodies, to the point where people don't blink an eye at a person being buried there. Unfortunately, plenty of toxic material had been buried there as well, which has served to (somehow) reanimate the dead. So now it's Fujio and Mitsuo, armed with their jujitsu, against the zombies. 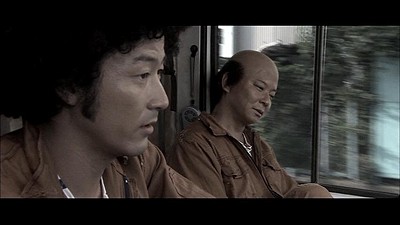 If this was what the film followed through on, there's a good chance it would have resulted in a good movie. Instead, the plot of two slackers (and Yoko, another rather annoying survivor they meet) against the undead world is just the beginning of the film, abandoned for a five-year flash-forward that leaps into a future overrun with zombies and Mad Max-like scavengers looking for dairy soft drinks, while the rich live in luxury bunkers powered by slaves, watching staged zombie battles for enjoyment. Fujio, now living with Yoko and their mute daughter in a shanty town, makes a living battling zombies in the pits for the rich and fending off the advances of the pit-master, both by using the jujitsu Mitsuo taught him. Where's Mitsuo? Well, that would be ruining it (if you either a) cared, and/or b) didn't easily guess.) By the way, an up-close fighting style like jujitsu hardly is the most effective weapon against creatures who can infect you with a bite, a point that could have received a bit more play.

It should surprise no one who knows Ichi the Killer or Gozu that the screenwriter of those films, Sakichi Sato, is the main behind the script and lens for this unusual movie, as his odd sense of humor and story is fully present. While your humble reviewer certainly didn't find it "Insanely hilarious!" or "Laugh-out-loud funny!," like the critics quoted on the box, and found parts of the back-end downright depressing, you can see the attempts at humor (especially the slapstick and cartoon violence early on) but it's really the story (and the frequent lack of logic that accompanies it) that's more of an obstacle to enjoying it. When the flash-forward hits (accompanied by a rather good animated sequence,) it basically indicates that you sat through 50 minutes of exposition that probably could have been summed up with a simple voiceover. Meanwhile, the second half of the film is barely related to zombies, which is a serious drag. You could easily replace the zombies with any other monster or even animal, and the movie would have changed very little, outside of the finale, as the focus is more about the struggle between the slaves and the rich, and any of the urgency normally found in zombie films is non-existent.

The unusual thing about this movie is there's really two distinctly different films in one, thanks to the dubbing done for this DVD. You can watch the movie with English subtitles, and get the sense of oddball comedy originally intended, or you can watch with a new English dub, which changes the dialogue to a more western tone. The feel becomes far goofier, with Fujio sounding like a stoner (which actually matches his look well,) and everyone seemingly more animated and excited. This mighty have worked well if they pushed it further, in a What's Up, Pussycat? way, creating a zombie version of Dude, Where's My Car?, but it just feels silly as is, and is best described as trying far too hard to be American. Sticking with the subtitles is definitely recommended. 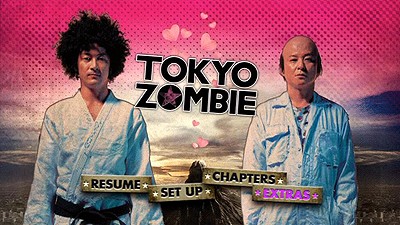 The DVD
The one-disc release is packed in a standard insert-less keepcase, which comes in an embossed, spot UV-coated slipcover that's really eyecatching. The DVD features a static anamorphic widescreen menu offering options to play the film, select scenes, adjust languages, and check out the extras. Audio options include English Dolby Digital 5.1 and Japanese Dolby Digital 2.0 tracks, with English SDH subtitles, and no closed captioning.

The Quality
The very wide anamorphic widescreen transfer isn't the greatest that's crossed my DVD player, thanks to color that alternates between slightly washed out and rather dull, while the picture, when not in a tight close-up, tends to be somewhat soft (the tight shots, on the other hand, are loaded with fine detail, a point that's clearest when focusing on Mitsuo's face.) There's no issues with dirt or damage though, and outside of some minor haloing, the image is free of defects.

The Dolby Digital 5.1 track puts the English dialogue dead-center, with the music and sound effects taking their spots in the side and rear speakers, though it's not the most immersive mix ever, as the atmospheric surround effects are a tad on the low end, and the bass isn't too impressive. When comparing the 5.1 mix and the Japanese 2.0 mix, the artificial nature of the dialogue in the 5.1 track is clear, as it's uniformly powerful, while the Japanese dialogue fits its settings more, with echos and volumes that feel more natural.

The Extras
Though the movie didn't do the trick for me, I can certainly appreciate the wealth of bonus material included (in Japanese with English subtitles,) which should satisfy the film's cult fan base. The first extra is an extensive 53-minute featurette on the making of the film, loaded with interviews with the cast and crew and a ton of on-set footage, including a large segment about the stars' fight training, with full rehearsals of their practices. It's just the kind of behind-the-scenes piece you'd want on a movie you enjoy.

If you wanted even more from the stars, you'll get plenty of it, with four separate interviews totalling over 35 minutes in all (with one also including Sato, manga creator U-Saku Hanakuma, and co-star Erika Okuda.) The interviews, which took place before two screenings of the film, in a private chat and during an appearance at an HMV store, tend to follow the usual Q&A format for movie stars, as they praise each other, answer the standard fluffy questions and laugh a lot. It's interesting to hear how often they are asked about their hair in these bits, since they look nothing like their characters in real life.

The DVD wraps with five previews for the film, including three teasers and two trailers. As these aren't the usual American-style trailers, they deserve a look no matter your opinion of the film. Oddly, the first trailer gives away basically the entire movie, from start to finish, besting the worst Hollywood's done at ruining films before you see them. It also has an amusing misspelling in the subtitles that changes the plot a bit. 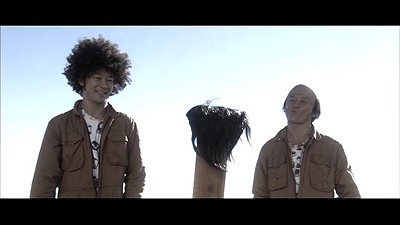 The Bottom Line
For anyone looking for an experience like Shaun of the Dead, they are better off returning to that modern classic, because this film is far too unbalanced to fully reward the 1:44 you need to watch it (a whopping 208 minutes if you want to check out both versions), even if there are some genuinely entertaining moments scattered throughout. The DVD looks and sounds decent though, and offers a healthy bundle of bonus material for anyone into the movie. If the concept sounds like something you'd enjoy, give it a rental, watch the first 50 minutes with subtitles and original sound, turn it off and think "Hey, that was a pretty good short." That's probably the best way for anyone not Japanese or well-schooled in Japanese culture to enjoy Tokyo Zombie.