Image // Unrated // May 10, 2005 // Region 0
List Price: $69.95 [Buy now and save at Amazon]
Review by Stuart Galbraith IV | posted May 9, 2009 | E-mail the Author
None of us here at DVD Talk seems to know quite why we were sent a review copy of Treasures from American Film Archives - 50 Preserved Films, a boxed set first released in 2000 and reissued five years later. As near as we can tell, it's not being reissued or discounted anytime soon. But when it unexpectedly turned up in our pool of unwanted screeners I eagerly snapped it up (after first doing a double-take worthy of James Finlayson when I saw it there). Back when this four-disc boxed set was first released and later reissued I had hesitated a) because of the price and; b) uncertainty over the strange jumble of titles it offered - some silent features, a few avant-garde shorts, home movies, industrial films, travelogues, etc.

Now I realize it's worth every penny and then some. I've watched thousands of DVDs of all kinds - but Treasures from American Film Archives easily ranks among the best-organized, most thoughtful and ultimately fascinating - and at times exhilarating collections I've ever come across. It's not so much a "Best of the Archives" gathering you watch but a unique, frequently revelatory viewing experience. The set is cleverly, indeed ingeniously compiled and packaged, drawing viewers to subjects and genres they otherwise might never experience. Critical to its appeal, the all-region set comes with extremely well-written and detailed booklets with very useful and interesting information about each title. I can't recommend this set enough. 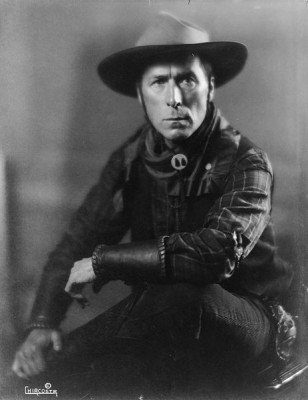 From the National Film Preservation Foundation's own website, here's a complete list of titles and brief descriptions, listed by Archive: 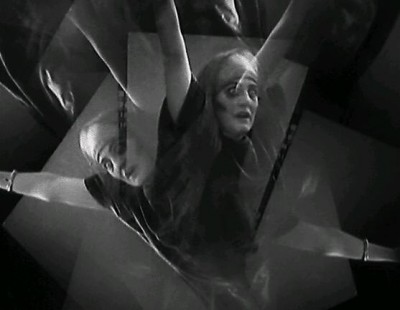 The Fall of the House of Usher

The Fall of the House of Usher (1928, 13 minutes), avant-garde landmark created by James Sibley Watson, Jr., and Melville Webber from Poe's short story.

Cologne: From the Diary of Ray and Esther (1939, 14 minutes), small town portrait by amateur filmmakers, Dr. and Mrs. Dowidat.

We Work Again (1937, 15 minutes), WPA documentary on African American re-employment, including excerpt from Orson Welles' stage play of "Voodoo Macbeth."
The Autobiography of a Jeep (1943, 10 minutes), the story of the soldier's all-purpose vehicle, as told by the jeep itself.
Private Snafu: Spies (1943, 4 minutes), wartime cartoon for U.S. servicemen, directed by Chuck Jones and written by Dr. Seuss.
The Battle of San Pietro (1945, 33 minutes), celebrated combat documentary directed by John Huston.
The Wall (1962, 10 minutes), USIA film on the Berlin Wall made for international audiences.

From The Keystone "Patrician" (1928, 6 minutes), promotional film for new passenger plane.
From The Zeppelin Hindenburg (1936, 7 minutes), movies by a vacationing American family made on board this famous lighter-than-air-craft, one year before its destruction.

Her Crowning Glory (1911, 14 minutes), household comedy, with comic team John Bunny and Flora Finch, about an eight-year old who gets her way.
I'm Insured (1916, 3 minutes), cartoon by Harry Palmer. 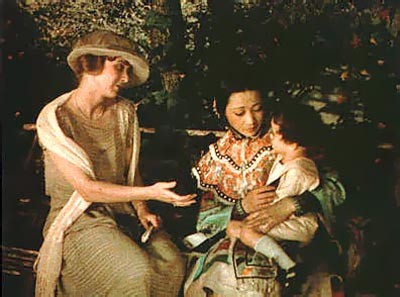 Anna May Wong in The Toll of the Sea

The Toll of the Sea (1922, 54 minutes), Anna May Wong in an early two-strip Technicolor melodrama, written by Frances Marion, and here accompanied a performance of the original music score.
The News Parade of 1934 (10 minutes), Hearst Metrotone newsreel summary of the year.
From Marian Anderson: The Lincoln Memorial Concert (1939, 8 minutes), excerpt from a concert film, reconstructed from newsreels, outtakes, and radio broadcast materials.

Treasures from American Film Archives is nearly 11 hours of surprises and unexpected delights, and its fascinations often transcend the movies' original intentions. For instance, with many of the earliest films, the pre-1910 ones, it's hard not to watch those and marvel at how they've managed to capture a period of American history that essentially has vanished forever. When I was a child, many early silent film stars and filmmakers were still around (being interviewed by silent era historian Kevin Brownlow, no doubt) but today, even the infants seen in these movies, if still alive, would be over a hundred years old now. Pictures like Move On, Demolishing and Building Up Star Theatre, and the incredible Interior New York Subway, 14th St. to 42nd St. offer time machine-like glimpses into the past whose appeal, in one sense, has come full circle. At the turn of the century, audiences marveled at pictures that could move, simple scenes brought to life, while 100-plus years later modern viewers watch these DVDs on big-screen TVs transfixed by the turn of the century fashions, at the early streetcars, the horse-drawn carriages, the playing children, busy street vendors, and threatening policemen - and imagine what daily life might have been like for these ghostly people immortalized on film.

Curators Scott Simmon and Martin Marks also chose to include a number of obscurities filmed outside the burgeoning film industry, amateur films like the pastoral Rural Life in Maine (ca. 1930), which captures a farming family working and picnicking through the seasons; and The Chechahcos (1924), an old-fashioned melodrama even by 1924 standards, but notable as an early feature independently-produced by Alaskans, a film that at once takes advantage of the incredible scenery but made with a professional polish that belies its modest roots. 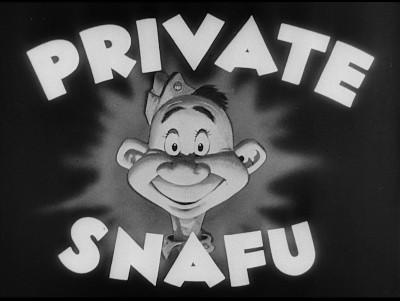 Varied U.S. government-produced films are included. The Autobiography of a Jeep (1943) is slickly-made, entertaining wartime propaganda, as is the surprisingly off-color Private Snafu cartoon Spies (1943), directed by the great Chuck Jones and featuring rhythmic dialogue by Theodor Geisel - Dr. Seuss. But these are balanced by John Huston's harrowing, controversial The Battle of San Pietro (1945), arguably the most brutally honest American-made movie about the war, made during the war. The Wall (1962) a government-produced documentary intended for foreign consumption only, about the Berlin Wall and early attempts by East Germans to flee to the west, is a fascinating document of that time and place without resorting to obvious overt anticommunist propaganda.

I admit to initially being drawn more to the disc's four features - the early William S. Hart Western Hell's Hinges (1916), which anticipates Clint Eastwood's High Plains Drifter (1973) in some respects (Hart's character doesn't just clean up the town, as in many Westerns, but outright purges it from the landscape); the earliest color feature, The Toll of the Sea (1923), a disappointing Madame Butterfly knock-off still fascinating from a technical standpoint and for the luminous, expressive Anna May Wong; the aforementioned The Chechahcos (no wonder it failed at the box office; I've seen it and still can't remember how to pronounce the title!); and an early Snow White (1916), a film that reportedly influenced a young Walt Disney.

I was also drawn to the earliest silent films, which here date back to the earliest ones exhibited publicly in America, notably Blacksmithing Scene (1893), and early silents featuring actors one rarely gets to see, such as the once hugely popular but now forgotten silent comedian John Bunny (in Her Crowning Glory, 1911).

And yet almost at once I became obsessed with almost everything else: the industrial films, travel shorts, avant-garde films. Of the latter, The Fall of the House of Usher (1928) is especially amazing, with a look both obviously inspired by The Cabinet of Dr. Caligari but also infused with a modern sensibility that still seems fresh today. 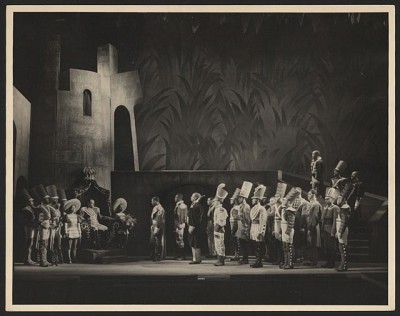 More surprises: We Work Again (1937), for its coverage of African-Americans impacted by the Great Depression and back to work thanks to New Deal programs, is fascinating enough, but it concludes with a filmed performance of the last several minutes of Orson Welles's celebrated "Voodoo" Macbeth, with an all-African-American (and amateur) cast. I've read about this celebrated production for decades but, until now, had never seen any film clips of it. White Fawn's Devotion (1910) is notable as perhaps the earliest surviving film directed by a Native American, the uncredited James Young Deer, and for an ending that would have been unthinkable just a few years later, the interracial family (white man, Indian wife, mixed race child) live happily ever after.

The last film in the set is an intriguing work-in-progress, an ongoing, multi-archive effort to reconstruct Marian Anderson: The Lincoln Memorial Concert (1939), a landmark event in the Civil Rights Movement, in its entirely by combining newsreel footage, a live NBC radio broadcast, and other footage. The eight-minute excerpt hints at something truly special once it's completed.

And then there's that Edison-produced short The Land Beyond the Sunset (1912), about a poor, motherless newspaper boy in New York City given a ticket to a brief summer trip by the Fresh Air Fund. It has all the crudities of early silents - painted backdrops, awkward edits, theatrical performances - and yet it is also indescribably poetic and unexpectedly moving - unlike anything this reviewer has ever seen.

Obviously, considering this collection spans numerous archives and films stretched out over nearly 100 years, the quality is variable but consistently very high. Many of the earliest films from the late-1800s and early-1900s look fantastic, in better condition than those from the late-teens for intriguing reasons described in detail in the accompanying booklets. Some early films have been reassembled from paper prints; in the early days of movies, the only way to copyright a film was to copyright each individual frame as an separate photograph. These paper deposits are slowly being converted back into film, and some of these are in excellent condition. The frames-per-second projection speeds for each of the silent films has also been carefully selected and duly noted in the booklets.

About the only title I was disappointed with quality-wise was The Toll of the Sea, not because of the condition of the film elements but rather because the video transfer appeared older, softer, and inferior to almost all the other material, but even it was acceptable. The four discs are all region-free, and have detailed but easy-to-use menu screens.

All of the silent movies have musical accompaniment in Dolby Digital stereo, carefully-scored to avoid anachronistic musical references, and original scores have been used where they exist. There are no subtitle or alternate language options.

Each of the four discs comes with an extensive 30-page booklet, with good credits for each film (often much more than what's found in the movies themselves) and a detailed essay that puts each film into perspective, offering background information on its production, its filmmakers and cast. Each film's notes also include information about the methodology in preparing the musical score, if it's a silent film, and notes about its preservation. Most of the entries also guide the viewer to other sources for additional reading/research - biographies of the filmmakers, places to access other videos and film prints featuring the same actors or made by the same directors, etc. All of this same information is included on the discs as text screens and are easily accessed. In short, these are among the best booklets I've ever encountered accompanying a set of DVDs.

In the short history of the DVD format, this is a landmark set that, in retrospect, obviously has had a huge impact judging by its official follow-ups (More Treasures from American Film Archives, etc.) and the many other similarly ambitious compilations - just today I received a press release for an All Day Entertainment set highlighting silent clown Charley Chase.

Treasures from the American Film Archives is an absolute must, and a DVD Talk Collector Series Title.