BBC Worldwide // Unrated // May 5, 2009
List Price: $24.98 [Buy now and save at Amazon]
Review by Stuart Galbraith IV | posted May 23, 2009 | E-mail the Author
If writer-director Mike Leigh ever decided to make a lighthearted sitcom, the result might be something like Gavin & Stacey (2007-present), an incredibly charming and funny show with unusually well-written, interesting characters. It's one of the best television comedies to come along in a while and, perhaps inevitably, an American reworking (a la The Office) is already being planned.

It's a refreshingly, uniquely structured show - deliberately short on story and conflict but rich with colorful characterizations drawing on generational, class, and regional contrasts like Leigh's films. It takes a relatively simple idea and explores it to its logical conclusion with observant good humor. Season One consists of just six half-hour episodes but each is a gem, and the disc comes with some very good supplementary material. 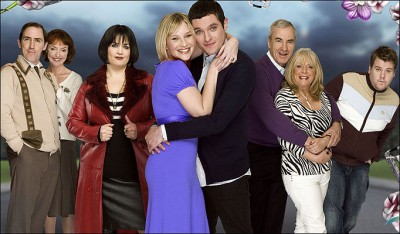 Having met on the telephone through work - each episode opens with Gavin and Stacey at their respective desks - they finally decide to meet for real in London at the beginning of Episode One. Theirs is a whirlwind courtship; they quickly decide to get married, in a ceremony and reception that takes up all of Episode Six, the final show of the first series. That's it - there's little doubt throughout Gavin & Stacey that all will be right with the world, despite some minor suspense about Stacey's multiple past engagements and her bad decision to keep this bit of her past from Gavin. Instead, there's an appealing, unabating celebratory air to all six shows that authentically captures specific life events (meeting the in-laws, the bachelor/bachelorette parties, the wedding, etc.) with a verisimilitude rare in situation comedy.

Part of Gavin & Stacey's charm are Gavin and Stacey themselves. It's clear to the audience they have that unshakable starry-eyed, youthful devotion for one another engaged couples in their twenties always seem to have; they're like the eye of a hurricane, oblivious to the whirlwind of franticness around them.

Much of this franticness is generated by Gavin's crude but highly sensitive best-mate, "Smithy," and Stacey's closest friend - the worldly, chain-smoking Nessa. James Corden and Ruth Jones, who wrote the series together, play these roles. Both are overweight, drink too much, smoke too much, party too much and - to their mutual disgust - inescapably lust after one another. Meanwhile, Smithy is torn between his obligations as best man and his anger at Gavin for "leaving him" for Stacey.

Gavin & Stacey's other significant character - and this reviewer's personal favorite - is Bryn (Rob Brydon), Stacey's well-meaning but hopelessly square uncle, who became something of a surrogate father to Stacey after her own father's passing. He's hilarious.

Much of the show's humor is regional, particularly the contrasting ways between the eccentric, lower-middle class Welsh characters - all played by Welsh actors - and the Essex ones, especially fussy, obsessive Pam. In one scene for instance Nessa, curious regarding the whereabouts of Smithy's alleged girlfriend, asks him, "Where to she now?" which gets a typically pithy response: "Either speak Welsh or learn English."

The acting is uniformly excellent, with many funny performances even in small, bit parts, and tellingly Corden, Brydon, Jones, Horne, and Page all have been nominated for various awards, reflecting the show's across-the-board good work. Joanna Page is especially adorable; one can easily imagine her becoming a big international star in the coming years.

Gavin & Stacey - Season One is presented in 16:9 enhanced widescreen on a DVD9, in a fine transfer with each episode running 27-29 minutes. The Dolby Digital stereo is excellent, making good use of directional audio and really bringing out its great soundtrack, a nice balance of pop tunes and light underscoring. Optional English subtitles are included.

The disc offers some good supplements: How It Happened is a nice overview of the series, a 25-minute featurette, also in 16:9 enhanced widescreen, with interviews with the cast, some outtakes, and Horne and Page's audition video. There are some good observations about the show, and it's clear everyone had a grand time filming it; an enjoyment conveyed to the audience in the finished product. Also included are about five minutes of additional outtakes; a three-minute Behind the Scenes in Leicester Square short that was originally used to publicize the series on YouTube; and insightful audio commentaries featuring Jones, Corden, and series director Christine Gernon for episodes One, Three, and Six.

I loved this show and can't wait to see the second series. It's hugely likable, funny and perceptive. As Page replies in answer to a question about the show's appeal, "It's just lovely, isn't it?" It is indeed. A DVD Talk Collector Series title.