In Treatment (Season One)

HBO // Unrated // March 24, 2009
List Price: $59.99 [Buy now and save at Amazon]
Review by Stuart Galbraith IV | posted May 27, 2009 | E-mail the Author
The HBO drama In Treatment (2008-present) has a gimmicky format - but the gimmick in this case is a good one and developed with subtlety and intelligence. Closely adapted from an Israeli television drama called BeTipul (2005-present), In Treatment "listens in" during the intimate sessions between a middle-aged therapist, Paul (Gabriel Byrne), and five of his patients. During its first season, the half-hour series aired weekdays, five nights per week over two months, with each episode covering one session. Monday through Thursday episodes focus on Paul's patients, while Friday's shows has Paul himself in therapy with his one-time mentor, Gina (Dianne Wiest).

HBO's big brick of a boxed set contains all 43 first season episodes on nine discs, some 21 1/2 hours in all. There are no extras, but the presentation is handsome. 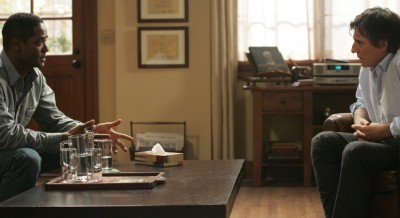 Since a large part of In Treatment's fascination is watching the layers of each character slowly being peeled away - it's at the root of what makes the show "hypnotic...addictive...[and] irresistible," as the quote on the front of the box from The New York Times accurately describes it - for that reason descriptions of the characters here will be limited to what's revealed only during the first week's episodes.

Monday's patient is Laura (Melissa George), an anesthesiologist neck-deep in emotional transference; in grappling with the troubled, unfaithful relationship she has with the doting boyfriend who wants to marry her, she's fallen in love with Paul, which she reveals in the first episode and which comes as a complete surprise to him.

Tuesday is Alex (Blair Underwood), a driven, overly-cocky fighter pilot whose bombs killed more than a dozen innocent schoolchildren in Iraq. Returning to the States, he runs an impromptu marathon, pushing his body to the point of suffering a near-fatal heart attack. He shows up at Paul's office announcing plans to visit the school where he dropped his bombs.

Sophie (Mia Wasikowska) is Wednesday's patient. She's a teenage gymnast and Olympic hopeful under analysis after seemingly throwing herself in front of a speeding automobile, nearly killing herself in the process. She needs his "professional opinion" on an insurance claim and clearly doesn't want to deal with her serious psychological problems.

On Thursday, troubled married couple Amy (Embeth Davidtz) and Jake (Josh Charles) see Paul. They had been trying to conceive a child for years; after myriad painful and humiliating fertilization therapies she became pregnant only after their doctors had given up and told them it was hopeless. Now, Jake is appalled at her unexpected desire to have an abortion.

Paul is personally disturbed by each of these patients. He was unaware of Laura's feelings, while Alex, Sophie, and Jake, looking for easy answers where there are none, make unreasonable demands. Jake especially demands a quick fix, and after a lot of relentless, personal badgering by Jake demanding a decision from Paul, the therapist unprofessionally blurts out his advice that the couple get an abortion.

This prompts Paul on Friday to visit Gina, his former mentor. They haven't seen each other in years and had parted years before acrimoniously; he didn't even come to her husband's funeral. Paul arrives seeking professional advice about the growing impatience and resentment he feels toward his clients, but Gina unexpectedly steers their conversation toward Paul's troubled marriage, which agitates Paul. Though early episodes focus on the sessions, gradually more and more of Paul personal life, notably his unhappy relationship with wife Kate (Michelle Forbes), spill into the beginnings and/or ends of each episode, and become more prominent in the Friday episodes especially.

In Treatment's big strength is that it shares highly intimate details in the lives of its characters but also pulls back, making the audience work - like Paul - to understand their motivations and feelings. One needs to pay attention to spot the behavioral clues - the way things are stated, by the patient's body language and gestures - clues coming from the teleplays but also telegraphed by the actors and their performances. It's the kind of show where what's most satisfying isn't outwardly expressed revelations about the characters but rather accumulating a better understanding of them as Paul does, through observation, by recognizing things just beneath the surface.

I was never much of a fan of Gabriel Byrne before this, but on In Treatment I really admire his extremely subtle performances; he knows just how to play to the camera and because of this it's easy to read a lot of unstated emotion and especially patient manipulation in his gestures and facial expressions. Perhaps unintentionally, Wiest's character does much the same in the same manner; is it because he fashioned his style of therapy after hers, or is it just a coincidence in the writing?

From a production standpoint, the show is ingenious. It must be incredibly cheap to produce: only a couple of sets, a small cast, etc.; all the hard labor falls squarely on the shoulders of the writers and actors. The pressure on the actors must be enormous. Credits suggest A and B cameras shooting long takes simultaneously, which undoubtedly adds to In Treatment's immediacy. The work is spread out pretty evenly; the patients plus Wiest appear once a week; Byrne has more to do, but chiefly reacts on four of the shows with a more involved performance reserved for Friday episodes.

Credits also suggest the actors use teleprompters, which at first may seem like a cheat, but it might actually add to the authentic feel of the performances. Jack Webb swore by this technique on the original, '50s version of Dragnet, not so much as a time-saving tool but because having the actors read off TelePrompTers added a kind of realistic banality to the delivery, making them talk less "actorly" and more as ordinary people do in real life.

Indeed, one of my initial concerns about In Treatment was that it was going to play like an Actor's Workshop, a series of indulgent one-act "performances." That's not how In Treatment plays at all. Instead it plays as very realistic, very intimate and observant on real world human nature. 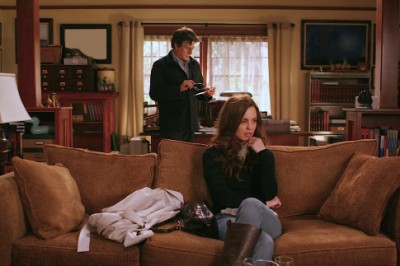 In Treatment is presented in 16:9 enhanced widescreen. The transfers are very good, up to current professional standards. Each episode runs about 26 minutes, a running time that fits the drama, and almost identical to '50s and early '60s television. The audio is 5.1 Dolby Digital Stereo but with a talking heads show like this that's pretty much immaterial. A 2.0 Spanish track is included, along with optional English, French, and Spanish subtitles, and the disc is closed-captioned. There are no Extra Features, though each disc includes a handy recap of the previous week's episodes. The recaps are in 4:3 matted widescreen.

This is a really good show, unlike anything that has appeared on America television before, and it makes me curious about the original Israeli version. I was intrigued from the first episode, and utterly hooked by the end of the first week of shows. A DVD Talk Collector Series title.