Retromedia Entertainment // Unrated // May 19, 2009 // Region 0
List Price: $24.98 [Buy now and save at Amazon]
Review by Stuart Galbraith IV | posted May 28, 2009 | E-mail the Author
Like most of Retromedia/Infinity's recent boxed sets, including their Hercules Collection and War Gods Collections, the playfully-titled Muscle Madness is a simple repackaging of previously released material. Included are Hercules Against the Moon Men, from October 2005; a double-bill of Goliath and the Sins of Babylon and Colossus and the Amazon Queen, from October 2007; and The Steve Reeves Collection featuring Giant of Marathon and War of the Trojans, from January 2008. Boxed together the set retails for half the cost of buying each disc separately, so if you don't already own them and enjoy Italian sword and sandal pictures, this is Recommended. If you already have some or all of these, there's no need to buy them again. 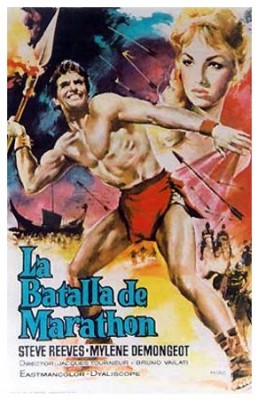 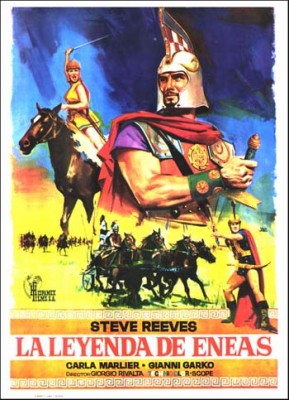 All five movies date from the Golden Age of Pepla, the Italian word used to described sword and sandal genre films. Though pepla have been around since the early silent era, it was the phenomenal international success of Hercules (Le fatiche di Ercole, 1958) that put Italian-made musclemen movies on the map. The movie itself was generally unremarkable, though cinematographer and uncredited semi-co-director Mario Bava helped make the relatively cheap film look much more expensive than it was through his ingenious lighting techniques and matte shots.

The picture might have ignominiously vanished without a trace but ambitious American exhibitor/producer Joseph E. Levine, having been part of the enormous international success of the first Gojira, which he helped Americanize and release around the world as Godzilla, King of the Monsters!, found in Hercules the film onto which he could built his Embassy Pictures empire. At a time when nearly all movies slowly made their way down the movie theater exhibition chain over several months, starting in the big downtown palaces and finishing up at the far-out drive-ins, so that rarely were more than 75-80 prints in national circulation at any one time, Levine did something highly unusual. He saturation-booked Hercules into hundreds of theaters simultaneously and the then innovative strategy paid off. Hercules may have been cheap. It was Italian and crudely dubbed into English. It had no stars. But Levine promoted like a Hollywood-made epic, and it became an event. It did huge business everywhere it played.

Never an industry to second-guess box office returns, the Italians responded to Hercules' success with dozens upon dozens of similar films, perhaps as many as 200 before the genre petered out utterly during 1964-65, when Sergio Leone's Fistful of Dollars paved the way for the Next Big Thing - Spaghetti Westerns. Virtually overnight the same casts and crews madly filming in Rome or in Spain abandoned their togas and spears for ten-gallon hats and six-shooters.

It was a good thing, too, because Italy's filmmakers had very quickly run the genre into the ground with cliches that, after a while, had a strong tendency to make every film seem much like all the others. Even the five films in this set quickly blur together in one's consciousness, like a banana split melted into a creamy pool of multi-colored goop.

The genre itself appeals to different people for different reasons. Middle-aged gay men obviously enjoy all the muscle-flexing. Straight and gay audiences alike appreciate the films for their camp value*, while others like genre scholars Tim Lucas and Sir Christopher Frayling are intrigued by the films as films. The diamonds in this rough may be infinitely smaller and more infrequent than most other movie genres, but they're there.

As far as Muscle Madness is concerned, by far the most audience-friendly picture is the colorful and charmingly goofy Hercules Against the Moon Men (Maciste e la regina di Samar, 1964). As the original Italian title suggests, it's not really a Hercules picture at all, but a Maciste film. Though an iconic figure in Italy, in America the Maciste name carried little weight, and almost always the name was changed, to Hercules, to Goliath, Samson, Colossus - you name it. Under any name though, star Alan Steel (actually Italian Sergio Ciani) was one of the most likeable actors to top-line these pictures. He's less the Greek Gods ideal that Reeves was; Steel looks like an unusually beefy if genial refrigerator repairman, but that also brings him down to earth just enough to make him relate better to the movie audience.

The picture itself - with an evil queen trying to conquer the world with the help of nefarious (and indescribable) moon men and goofy-yet-somehow-impressive walking rock creatures - has such a wonderful use of Day-Glo colors that to my eyes it always looked more like a Mario Bava movie than the officially credited director, Giacomo Gentilomo (The Dragon's Blood, Samson vs. the Vampires), and in recent years it's been surmised Bava may have played a major role in its production.

Similarly, The Giant of Marathon (La battaglia di Maratona, 1959), despite being credited to Jacques Tourneur (Cat People, Out of the Past, Night of the Demon), was actually completed by Bava, credited here as Director Photography and Special Effects. In fact it was this film that finally launched Bava's official, solo career; he was rewarded for his efforts here with what eventually became Black Sunday, the watershed Italio-Gothic. The film has good photography and some impressive matte work by Bava, but the story is standard stuff, with Olympic Games champion Reeves appointed to head the sacred guards only to be drawn into the usual conspiracy between power-obsessed middle-men and ambitious mistresses, as mediator in an uneasy alliance between two great nations to defeat a greater menace with whom the power-mad traitor is in league; the murder of the hero's mentor, always a respected statesman and usually also the father of the ingénue, etc., etc., etc. All the cliches and more are present in The Giant of Marathon.

And, for that matter, in War of the Trojans as well. Also known as The Avenger (La leggenda di Enea, 1962), this sequel to The Trojan War from the previous year has Reeves reprising his role of Aeneas, but overall this is a lesser film than both The Giant of Marathon and its immediate predecessor. It was Reeves's 11th Italian spectacle, and his waning enthusiasm for such films was beginning to show, with Aeneas leading the fallen Trojans to a newfound settlement, land that would eventually become the Roman Empire. It's all highly derivative; an obvious tip-off being the opening titles, which are so shamelessly stolen from Saul Bass's title design for Spartacus the famous designer should've sued for plagiarism.

Somewhat better is Goliath and the Sins of Babylon (Maciste l'eroe piu grande del mondo, 1963) starring Mark Forest, one of the more charismatic genre stars. A Maciste movie by any other name, it features the usual elements, including this time another iconic genre component - the comical dwarf, played here by Arnaldo Fabrizio - but the picture is somehow livelier than most. Some of the action scenes are almost epic, and Forest makes a genial Goliath/Maciste.

Despite the generic English title, Colossus and the Amazon Queen (La regina delle Amazzoni, 1960), with nary a Colossus in sight (but with a "sacred girdle" figuring heavily in its story), is actually a broad genre spoof rife with the kind of frenetic Italian humor that tends to leave American viewers nonplussed. The picture teams Australian-born, Hollywood-nurtured Rod Taylor (The Time Machine) and typical genre beefcake Ed Fury (born Edmund Holovchik); Fury goes through the usual motions, but Taylor acts like Tony Curtis in Some Like it Hot, a strange sight, though Taylor is very good and even funny, though unfortunately his performance is dubbed by someone else.

This is to the pepla what Calamity Jane is to the Western, a dizzying gender-confused farce with outrageously gay characters, butchy Amazon women, and musclemen who talk like Franklin Pangborn, but it also features gaggles of incredibly voluptuous woman, and features more hints of nudity and double-entendres among straight members of the cast than usual for such films. 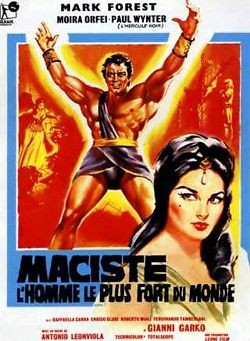 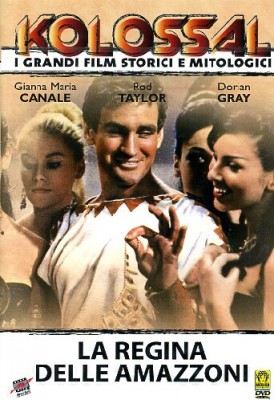 All of the movies in this set are in 16:9 enhanced wide screen, preserving their 'scope aspect ratios of 2.35:1, with the exception of Colossus and the Amazon Queen, which is 4:3 panned-and-scanned. Typical of Retromedia's releases, there's a fair amount of artificating and low bit-rate issues, while the theatrical prints sourced have varying degrees of dirt, scratches, splices, faded color and other age- and wear-related issues, but aren't terrible, and two of the titles look exceptionally good.

The Steve Reeves films, Giant of Marathon and War of the Trojans, stick both pictures on a single-sided, dual-layer disc. Giant of Marathon (86:13) uses a print with MGM's logo at its head. War of the Trojans (89:39) has a video-supered title card (this special edition "copyright 1007" by Retromedia); the print has a fair amount of damage and is rather soft, probably from a 16mm 'scope print.

Hercules Against the Moon Men (91:10), all by its lonesome, has a Governor Films logo at the head and looks sensational. Similarly good film elements were used for a Something Weird Video DVD release in 2002; this may be the same transfer.

The whole shebang is region-free.

Hercules Against the Moon Men comes with a 4:3 trailer in poor condition and a funny "Men!! How to Be a Hercules" calisthenics booklet, but that's about it.

This set is Recommended for those who a) like sword and sandal pictures; and b) don't already own any of the movies in this set. It's a good and varied collection, a decent value considering the price.


* Sergei Hasenecz objects to my use of the term: "I saw a double-bill of Hercules and Hercules Unchained, which at that point in my life were the best, most exciting movies I'd ever seen. While it's an opinion that has long since changed, those movies left an impression that the five-year-old part of me still recalls with fondness. Memory ever green: Steve Reeves in his chariot, using that grappling hook to pull down the siege towers --wow!

"When I watch one of these movies now, yes, I see how absurd and cheap it is, but I never watch for camp value. This latter is a term I dislike because it's so overused. Too many reviewers of these movies make it sound like the audience is nothing but gay fans. (Much the same happens with Bette Davis and Joan Crawford movies, too.) But some of us - if we do not allow the absurdities, cheapness, bad special effects and worse dubbing to cloud our vision entirely - are simply recapturing, in a small way, that sense of wonder and adventure of a wide-eyed five-year-old in a movie theater."