Not that American adults were particularly receptive. Probably at least in part due to Gigantor's grating theme song - it's like something African natives would chant in a cheap Jungle Jim movie, and quite unlike the snappier themes adapted for Speed Racer and Kimba - but also due in part to cultural differences and varying expectations for animated cartoons, critics and many parents hated it. Variety's reviewer didn't hold back, calling it "strictly in the retarded babysitter class," adding that he found it "loud, violent, tasteless, and cheerless" (but what did he really think of it?).

But back in those days when families were lucky to get six or seven channels out of their 19-inch black and white set (three network affiliates and maybe a few more indie stations, mostly on UHF), Gigantor was a gigantoric hit. Amusing trade ads included in this DVD's booklet make that much plain: Where in New York Huntley-Brinkley's evening news on WNBC was drawing an impressive 15.5 rating, over on WPIX Gigantor was winning hands-down with a 17.5.

E1 Entertainment's DVD of Gigantor - The Collection - Volume 1 is a nice set of the first 26 episodes (half of the show's 52-episode American run; in Japan it ran an additional 45 show). The fun packaging and extras are reminiscent of and perhaps patterned after Warner Home Video's Adventures of Superman sets. 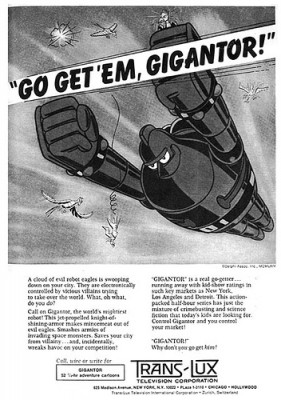 After adapting the bizarre Belgian animated feature Pinocchio in Outer Space (1965) and working as a writer and voice director on Astroboy, Fred Ladd and Al Singer formed their own company to acquire and adapt Tetsujin 28-go for the American market, enlisting the aide of actor-writer Peter Fernandez, who voiced innumerable Japanese and Italian movies and TV shows and today remains something of a living legend in his unusual field.

In the American version, set in the year 2000, Jimmy Sparks is a 12-year-old boy who by remote control operates Gigantor, a seemingly indestructible giant robot that looks like a cross between the Tin Man from The Wizard of Oz and a French infantryman from World War I. In most episodes, Jimmy and Gigantor are joined by various other characters, including Dr. Bob Brilliant, who with Jimmy live on a remote island a la the later Thunderbirds series, and like that show battle various criminal organizations and alien invaders.

Like other '60s Japanese anime, the animation is extremely dynamic in design but severely limited in terms of movement. This trade-off was not initially appreciated by western audiences, including many of those normally partial to animation and sci-fi/fantasy. Weaned on Disney and that studio's lifelike ambitions, American audiences generally found Gigantor primitive in the extreme.

And at times it is pretty primitive, reminiscent almost of the crude "flip-it" animation me and my pals in junior high would create by drawing in the corners of the pages of textbooks.

And yet Gigantor and its ilk offered something lacking in the one-reel cartoons of the '30s-'50s that were airing on TV by then, or the Hanna-Barbera sitcom-styled antics of The Flintstones and The Jetsons. Gigantor had the dynamism of a hard-boiled action film, even anticipating somewhat the spy genre by a year or two, and unlike its American TV counterparts, Gigantor really looked like a comic book come to life. A weird, otherworldly comic book perhaps, but one nonetheless.

Looking at it now, Gigantor has a lot of nostalgia value and is interesting to see how much Japanese creator Mitsuteru Yokoyama and his small crew were able to accomplish in such a short amount of time and with very little money - the animators must have had smoke coming out of their drawing pens. But it also lacks the strong characters and involving story arcs that made later shows like Speed Racer and Kimba more memorable, though Gigantor employs the same multi-episode arcs of those shows. Gigantor also has the same dramatic problem as Superman - virtual invulnerability. Unlike Speed Racer, where death lurks around every guard rail, or Kimba, where white hunters want to skin you alive or mount your head on their wall, in Gigantor nobody ever seems to be in any real danger, and thus dramatic conflict is pretty much nil, despite the almost constant gun battles and other non-stop action. For most adults, Gigantor is a show today best appreciated in small doses.

Gigantor - The Collection - Volume 1 presents 26 full-frame, black and white episodes on four single-sided DVDs, sourced from original 16mm film masters. (The Japanese series, presumably, likewise was shot in 16mm.) Though not up to the crystal sharpness of, say, the black and white Max & Dave Fleischer "Popeye" cartoons, Gigantor looks better than I remember it 40-odd years ago. The English-only audio is clean and clear; the Ladd/Fernandez-supervised English dubbing has as strong a nostalgia value as the shows themselves. The 24 1/2-minute episodes do not appear cut or time-compressed.

The packaging is attractive. The set comes with a nice 14-page booklet that includes an episode guide, a brief history of the show, trade ad reproductions, and lyrics for the theme song.

Other supplements include an interesting interview with director/producer/writer Fred Ladd (34:12, in full-frame format); an interview with anime historian Fred Pattern from 'Animation World Magazine' (28:45), with a nice overview of the genre's origins; audio commentaries with Fred Ladd on selected episodes; and, finally, issues #1-6 of a Gigantor comic book on DVD-ROM.

For those interested in '60s television cartoons or early Japanese anime, Gigantor - The Collection - Volume 1 is right up your alley. Hayao Miyazaki it's not, but it has a retro charm nostalgic fans will enjoy. Recommended.