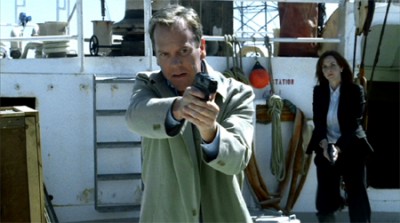 Let's not beat around the bush, shall we? The sixth season of 24 was a big let down that almost killed the show in the minds of many fans. In all fairness I didn't mind the season that much, though it was definitely the worst one to date. Considering how high the other seasons raised the bar for the franchise that was a tough act to follow. The writer's just seemed to lose some of their direction and things got a little out of hand with too many side stories and the like. I, like many of you, feared what the future had in store for 24. After the sixth season, the writer's strike and Kiefer Sutherland's DUI issues seemed to indicate that a seventh day for Jack Bauer would be a long-shot. Thankfully the stars aligned and the release of 24: Redemption gave fans something to look forward to yet again.

In case you missed it Redemption more or less filled the gap between the sixth season and this one. A new president named Allison Taylor (Cherry Jones) has been elected and a dictator named Juma (Tony Todd) is running amuck in Sangala, Africa. Jack (Sutherland) finds himself caught up in the middle of a coup d'etat while looking for a place to find peace. Silly Jack, doesn't he know that he can't have such a thing? As a standalone story Redemption did a great job setting up the events of this seventh season, which more or less picks up a short time after the fact.

When this season starts Jack has been subpoenaed to appear before a United States Senate committee charged with investigating allegations of torture and extreme methods of interrogation. Naturally we've all seen what Jack has done over the previous days, and quite frankly he did what nobody else could do. His methods saved the lives of countless civilians and before this day is through he'll be forced to do the same yet again. Before the trial could really begin some agents from the FBI appeared the courtroom and had Jack released into their custody. It seems there is a matter of national security and someone Jack used to know is involved. Naturally it's only fitting that he be allowed to save the country once again! 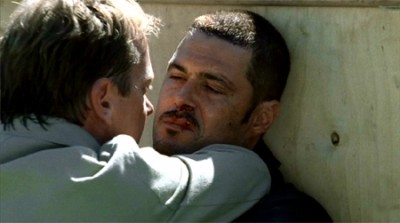 This season of 24 reintegrates Tony Almeida (Carlos Bernard) into the fold and he's a person of suspect that Jack is brought in to find. I know you're thinking, "But Tony's dead!" I had that thought cross my mind as well, but then I realized this was television and 24 for that matter. How many people have had fake deaths in this show before? His resurrection is explained rather well, but his character is somewhat different for this season. Some of the changes work, some of them don't. Basically Tony's been doing some bad things since he was brought back to life, and though some of it seems to be a cover, there are some mysterious elements to his life that just aren't explained well enough. Most of these developments come later in the season, and at the start all you need to know is that Tony is working undercover to get closer to a man named Dubaku, who is basically Juma's right hand.

The terrorists working for Dubaku have recovered something known as a C.I.P. device which infiltrates the firewalls of multiple U.S. facilities. Everything from air traffic control to chemical and nuclear facilities, and even water treatment plants come under the power of this device. Dubaku launches a couple of attacks to get the President's attention in an effort to have her withdraw troops from Sangala. Naturally it's up to Jack to do what he does best and lead the FBI to Tony, destroy the C.I.P. device, and capture Dubaku. 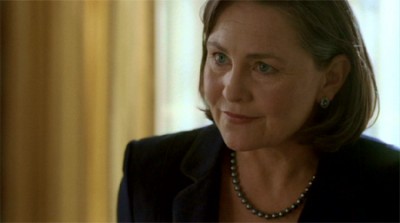 During the course of the season it's revealed that Dubaku's actions aren't the only ones being taken against America today. A plot to attack the White House and assassinate the President is on the docket, there's a list of traitorous agents within the government that is a hot button issue, and behind everything there's the matter of a bio-weapon being confiscated into the States by a military company and secret organization. Jack basically finds himself running and trying to put one fire out after another. It gets to the point of being ludicrous to think that this all happens within the span of a day, but it's 24 and that's what the show does best for the most part. It keeps you on the edge of your seat and pushes you along for a frantic action packed ride. It's like watching a train wreck really. You just keep waiting for the next disaster to hit and wondering how people are going to get out of it alive.

To say that the seventh season of 24 is riveting entertainment would be an understatement. Once you pop the first disc in and start watching you simply won't be able to stop until the clock ticks down the final seconds of the 24th episode. In many ways this season will also make you forget about the previous one, due to the fact that there are so many strong points here. The writing was definitely better all around and the acting, as usual, was very good. From main cast members to guest stars (John Voight and Peter Wingfield anyone?) and recurring actors, 24's seventh season is a great example of fine television casting (Aside from Janeane Garofalo's role on the show. She just didn't fit in at all). With that being said there are some looser elements that don't quite fit in as well as they could have. 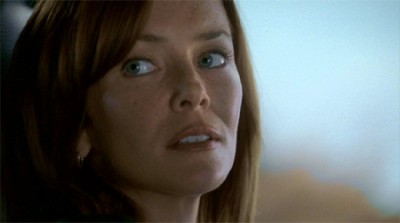 If you've watched any season of 24 before, then you know that each episode is no exclusively about the big threat at hand. There are little events that are tied into the story as well, and in all fairness there were far too many in the sixth season for its own good. This time around there was bits and pieces of this as well but they were done to a lesser degree. A couple examples of this include the President's husband obsessing over the death of his son (though this is tied into the larger story at some point), the President's daughter being brought into her administration, and office chatter between some members of the FBI. While not entirely pervasive these plotlines due slow down the pacing of the season and detract from the overall experience a bit, though they aren't crippling by any means.

Overall 24 Season Seven is awesome and everything you could have possible wanted from the series. It's a return to the show's true form and memories from the sixth season will slowly fade away as you watch this one. Jack runs from one disaster to the next and the storyline constant ramps things up with twists, deaths, and action to keep you interested. I couldn't put this set down and found myself watching one hour after another. Hopefully this trend continues and we'll see an eighth season of equal caliber. 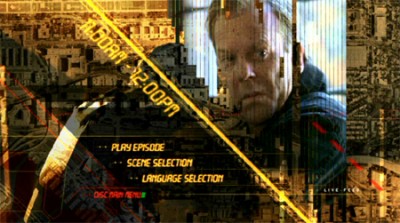 24 Season Seven is presented on DVD with a 1.78:1 aspect ratio and has been enhanced for anamorphic playback. If you've seen previous DVD releases for 24 then you pretty much know what to expect already. The show has always maintained a clean presentation with a certain dark style and nice contrast. That trend continues for this season and overall the image quality is very good, though not perfect. There is some grain at times and artifacts can be spotted within some shadows and certain darker scenes. Other than those flaws the rest of this transfer is crystal clear with sharp details and many moments that stand out.

The audio presentation for 24 Season Seven is every bit as adept as the video is. The 5.1 Dolby Digital Surround track that is available truly packs a punch and will give your system a workout. For starters the sound is crystal clear with no defects whatsoever. Everything from the dialogue to music and sound effects rings through perfectly. Improving upon matters is the 5.1 offering which really seals the deal. This track is lively, full-bodied, and uses each channel intelligently. You really couldn't ask for a better presentation for the sound! 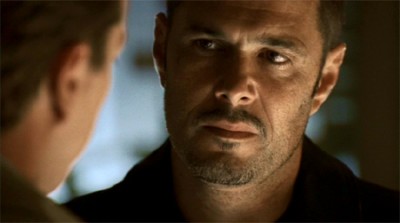 24 Season Seven boasts an impressive amount of bonus features, but good luck finding them! You really have to dig through the six discs in order track them down and there's nothing to indicate what you're going to find where until you pop in the appropriate disc.

On the first disc there are two audio commentaries available. Episodes "8:00 - 9:00 am" and "10:00 - 11:00 am" are the ones in question and you can expect to hear from Jon Cassar, Carlos Bernard, Manny Coto, and Brannon Braga. The commentators vary per episode, but they each bring something to table and have some stuff that's worth listening to. Aside from the commentaries the first disc includes a feature entitled "The Music of 24" (13:04). As a featurette pertaining to music goes, this one is fairly decent and goes on to show how the music was used in some scenes in particular.

While the fifth disc includes yet another commentary (Episode "1:00 - 2:00 am"), there is also a featurette called "Hour 19: The Ambush" (12:47). This feature examines the great effects used during a moment later in the show when the FBI team is ambushed. There's a nice look at the techniques used to bring this scene to life and you can expect to learn a lot about the special effects that went into making it work.

The final disc of this set picks up the pieces and offers up the rest of the bonus material. Finishing off the audio commentaries are three more that cover 5:00 through 8:00 am. Other than the commentaries you can find 14 deleted scenes. These moments that were cut from the season run more than 25 minutes and mostly involve things that didn't quite fit within the storyline, or seemed to slow down the pacing. The final offering is a 15 minute making of featurette that goes into some details about the production of this season and what some of the challenges were. Needless to say, everybody wanted to make a better season than the sixth one. 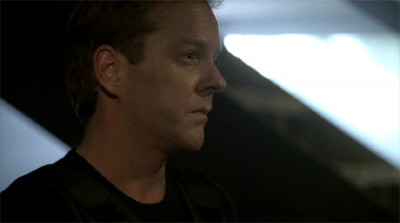 24 Season Seven sees the show return to its true form. This highly kinetic series will grab you at 8:00 am and not let you go until all 24 hours have passed. There's so much action, tension, betrayal, drama, and head-spinning events here that you never know what's going to happen next. It's an edge of your seat kind of experience and if you've enjoyed other seasons of the show you're going to love what this one has to offer. Redemption isn't required viewing in order to understand what's going on, but without it you'll undoubtedly be a little lost at the beginning. Overall this season of 24 comes highly recommended and it's nice to know that the quality of the DVD lives up to expectations.