Shaun the Sheep: Sheep on the Loose 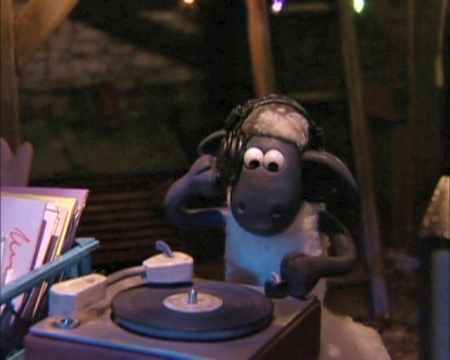 Originally making his first appearance in Aardman Animation's Wallace and Gromit: A Close Shave (1995), the inquisitive and clever Shaun the Sheep has become one of the company's most popular supporting characters. Unfortunately, Shaun didn't make an appearance in the duo's first feature-length adventure---but Aardman hadn't forgotten fans of the woolly hero. Later that year, a television series featuring Shaun hit the British airwaves, with Region 1 eventually catching up a short time after. Produced in the company's trademark style of expert stop-motion animation, the aptly-named Shaun the Sheep reminds first-time viewers of classic Wile E. Coyote and Tom and Jerry cartoons: it's wordless in a technical sense, utilizing clever sight gags and music to tell each seven-minute story.

Away from the bustling atmosphere and invention-fueled excitement of Wallace and Gromit, Shaun's world is an ordinary farm with green pastures and wooden fences. Along with a flock of considerably less clever and athletically-inclined sheep, a strict but lazy guard dog, a somewhat witless farmer and a trio of mischievous pigs, Shaun manages to make the most of each day. Whether leading the flock in morning exercises, organizing a game of soccer, wrestling with the pigs or simply munching on grass (when the farmer's looking, of course), our hero's bravery is sometimes outmatched by his own recklessness---but more often than not, Shaun saves the day. Although this series is clearly aimed at younger audiences, it's perfectly acceptable fare for those who enjoyed Wallace and Gromit, Creature Comforts...or, let's face it, pretty much the entire Aardman back catalogue.

As mentioned earlier, each wordless seven-minute short is packed with laughs---and with such a strict timeframe, these adventures don't overstay their welcome. The first two Region 1 Shaun the Sheep collections, Off the Baa! and Back in the Ba-a-ath, contained 8 shorts apiece---but this most recent collection, Sheep on the Loose, includes only 6 and keeps the $15 price tag. It's a bit expensive for roughly 50 minutes of content (including the bonus features), but the quality of the content softens the blow. To make a long story short, Shaun the Sheep maintains the high standard of quality that Aardman fans have come to expect. 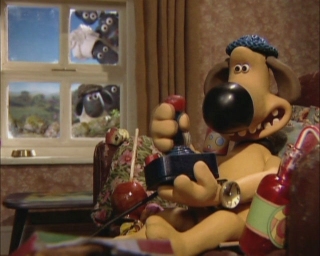 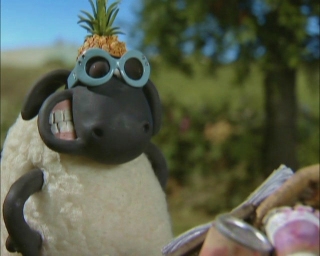 As for these episodes, each and every one is a highlight. "Sheep on the Loose" sends the flock on a field trip, and it's up to Shaun and Bitzer (the guard dog) to bring them home. "Saturday Night Shaun" (seen at top) centers on a discarded record player, which Shaun uses to get the party started in a nearby barn. "Tidy Up" (above right) and "Camping Chaos" are two like-minded adventures about cleaning up the messy farm (whether it's their fault or not), while "Shaun the Farmer" (above left) gives our hero the chance to be in charge when the farmer falls ill (and the dog's too busy playing video games). Finally, "If You Can't Stand the Heat" follows the flock on a particularly hot day...but the farmer and his dog won't let them use the pool. Each of these charming shorts features plenty of great sight gags, clever plots and excellent stop-motion animation.

Unfortunately, the quality of this DVD release doesn't match the episodes themselves. Like both previous Region 1 collections, these episodes are cropped and bonus features are kept to a minimum. All told, this is a somewhat disappointing release, made even more frustrating by the strength of the Region 2 originals. Let's take a closer look, shall we?

Presented in cropped 1.33:1 aspect ratios, the pan-and-scan presentation isn't the only problem on display here. Region 2 Shaun the Sheep DVDs maintain the series' original 1.78:1 aspect ratio---but since this Region 1 release is aimed at the younger crowd, I guess Lionsgate didn't bother with quality control. The color palette doesn't exactly pop off the screen, while notable amounts of edge enhancement and interlacing can also be spotted along the way. The other two Region 1 collections suffered the same fate, so it's doubtful that Lionsgate will be correcting these problems any time soon.

The Dolby Digital 2.0 Surround mix fares better, featuring good channel separation and clear "dialogue". Inquisitive bleats fill the soundstage on many occasions. The playful music also comes through loud and clear, rarely fighting for attention and typically anchored up front. Closed Captions are included for these six shorts, but not during the bonus features.

Seen below, these plain-wrap menus include episode selection and a handy "Play All" option. Each 7-minute episode has been presented without chapter stops, while no layer change was detected during playback. This one-disc release is housed in a eco-friendly black keepcase with an embossed slipcover; a two-sided promotional insert is also tucked inside. 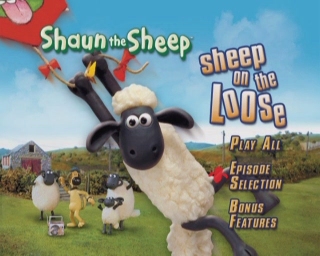 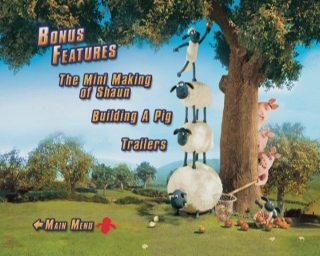 Bonus Features
Also included are two brief featurettes,"The Mini Making-Of Shaun" and "Building A Pig" (9:58 total), originally produced for the Region 2 releases. The first piece doesn't go into a great deal of detail, but younger audiences will enjoy seeing some of the behind-the-scenes activities that bring Shaun and company to life. The second like-minded featurette is a bit more focused, showing a step-by-step process so young artists can sculpt one of their own mischievous pigs. Both are presented in 1.33:1 format and do not include optional subtitles or captions. Frustratingly enough, a handful of forced Trailers are presented in anamorphic widescreen.
Final Thoughts

There's no doubt that Shaun the Sheep continues Aardman's tradition of flawless stop-motion animation, cracking comedy and clever sight gags. Even with less than an hour of content to its name, it's forgivable when the content is this entertaining from start to finish. As with the other two Shaun releases, unfortunately, Lionsgate hasn't put forth much effort: cursed with a pan-and-scan visual presentation and a lack of more substantial bonus features, even the low price tag makes Sheep on the Loose nearly impossible to recommend. Die-hard disciples of Shaun may simply want to import the widescreen Region 2 collection, while new fans should give this a weekend spin at the very most. Rent It...but if you're serious about importing the Region 2 collection, click here for more info. At less than $40 shipped for five volumes' worth of content, it's a better deal anyway.

Other Links of Interest: Shaun's Official Website | More Aardman DVD Reviews
Randy Miller III is an affable office monkey based in Harrisburg, PA. He also does freelance graphic design projects and works in a local gallery. When he's not doing that, he enjoys slacking off, second-guessing himself and writing things in third person.