We'd take the path to Jupiter,
And maybe very soon.
We'd cruise along the Milky Way,
And land upon the moon.
To our wonderland of stardust,
We'll zoom our way to Mars,
My heart would be a fireball,
A fireball,
If you would be my Venus of the stars.

Though impressed by its production values, I was never much a fan of Thunderbirds, Gerry & Sylvia Anderson's internationally popular puppet series filmed in "Supermarionation," to say nothing of Videcolor. It was big and elaborate, with special effects rivaling the most expensive A-list feature films of the day. But for me the 50-minute shows stretched thin scripts with an overabundance of miniature effects that sucked the humanity right out of it, while its characters were too stalwart to be very interesting, with the male ingénues, the Tracy family's sons, being particularly interchangeable.

On the other hand, recently I've developed a great fondness for the Anderson's earlier puppet shows - Supercar, Fireball XL5, Stingray - which technically are more primitive yet also somehow more much more charming. I'm particularly enamored of Fireball XL5 (1962-63), an unpretentious black and white program that ran for just one series of 39 episodes. It's more naïve and less self-conscious than Thunderbirds, a throwback in some respects to American space shows of the early-1950s.

A&E released an excellent but pricey boxed set of the series in 2003. That set had great transfers but minimal extras. But now Network DVD in the UK has released a newly remastered Special Edition of Fireball XL5 with a mountain of fascinating extra features, including a movie-length documentary, home movies, and a sample colorized episode. Like the series, it's enormous fun. 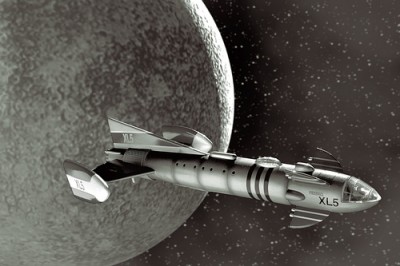 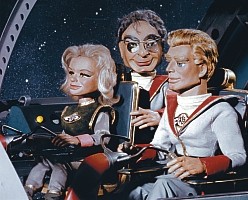 Based at Space City - Fireball launches up a mountainside along a stretch of roller-coaster-like rails, a shameless steal from When Worlds Collide (1951), though Gerry Anderson denies this - the crew are also friends with World Space Control's blustery Commander Zero (John Bluthal); his ambitious assistant, Lt. Ninety (also Graham); and Scottish engineer - several years before Star Trek's - Jock Campbell (Bluthal).

A beguiling sense of wonder permeates the series, an excitement about finding strange, unexplored planets, weird abandoned spaceships, and heretofore-unknown alien life forms. The hardware is pretty retro even by 1962 standards; other than the marionettes, the show looks more like Rocky Jones, Space Ranger than Thunderbirds, and there's a similarly naïve disregard for science, most notably in the way Zodiac and the others can wander around outside Firebird without the aid of oxygen tanks or protective spacesuits (in one early episode it's explained that consume oxygen pills before stepping out into airless space).

With each series the Andersons strived for greater realism; the characters in Fireball XL5 are more cartoony and less articulate and lifelike than those found in later Anderson shows like Captain Scarlet and the Mysterons, but I found myself liking them more than those found in the later Anderson shows. Early episodes tend to be typical exploration of a strange planet/earth under threat-type stories typical of juvenile science fiction, but as the show went along scripts frequently highlighted one particular character, often an exploration of that individual's dreams. (The sample colorized show, "A Day in the Life of a Space General," has Lt. Ninety changing places with Commander Zero for a day.) Other offbeat shows, like "Flying Zodiac," another it-was-all-a-dream episode, has the cast performing in a futuristic circus.

The look of the show is just wonderful. Videcolor is all well and good, but there's something about the original black and white - the series was shot in 35mm - that compliments the show's fantastic sets and settings. The groovy closing theme song (see above), written by Barry Gray and performed by Don Spencer, became a hit in Britain and exemplifies the show's bouncy, lighthearted feel.

DVD Talk was sent only check discs (which is why we can't yet review the booklet by TV historian Andrew Pixley supposedly included, or the packaging generally), though they seem close to final product. The black and white, full-frame transfers look just great, with extremely good contrast and deep blacks. The mono audio is likewise fine, and the shows are spread over six single-sided discs.

The big supplement is A Wonderland of Stardust, an entertaining, exhaustive 73-minute, 16:9 enhanced widescreen documentary covering every facet of the show's production. It features clips from other Anderson-produced series and on-camera interviews with Gerry and Sylvia Anderson and other members of the cast and crew, including David Elliott, Alan Pattillo, and special effects man Brian Johnson. Actor/voice artist Shane Rimmer narrates the documentary.

The colorized A Day in the Life of a Space General gives fans a taste of what the show might have looked like had it been filmed in color. Technically it's extremely well done and it's fun to see one of these kind of things, but I still prefer the original black and white myself. Clips from the colorized version can be seen here.

If you already own A&E's NTSC boxed set, the remastered episodes and all the extra features more than justify an upgrade, while those new to the series will want this release. If you're already a fan of '50s/'60s sci-fi television, of space adventures, retro children's shows, or puppets, Fireball XL5 is for you. A DVD Talk Collector Series title.