Network Distributing Ltd // Unrated // June 22, 2009 // Region 2 // PAL
List Price: £19.99 [Buy now and save at Co]
Review by Stuart Galbraith IV | posted July 16, 2009 | E-mail the Author
British singer and talk / variety / game show host Des O'Connor was totally unknown to this American DVD reviewer until given the chance to review Network DVD's Des O'Connor - Volume 1, a two-disc set of highlights from the star's 1970 series - his first in colour and part of a 13 episode-run of shows that at some point aired on America's NBC network. 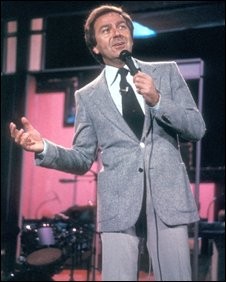 There's more than four hours of material, the vast majority of which - about 90% - turns out to be either O'Connor covering popular tunes of the era (Nilsson's "Everybody's Talkin,'" etc.) or O'Connor at the center of some typically '60s/early'70s-style variety show sketch comedy. A few familiar faces turn up in these sketches, but there's a singular dearth of star names one usually associates with programs like this - and American DVD compilations like Rowan & Martin's Laugh-In, Mike Douglas, etc. Because the sketches are generally no better than those found on American television (read: not very good), a 10-minute dose is plenty, four-plus hours is agony.

I kept waiting for the genial but hoary comedy and pleasant but unremarkable O'Connor solos to end and for something a little different to turn up, but it never did. O'Connor sings song after song in between the comedy segments, usually with comedian Jack Douglas (probably best remembered as a regular of the later "Carry On" films), more often than not playing his signature Alf Ippititimus character.

O'Connor is a talented singer, certainly; he's recorded three dozen albums over the years, and had a Number One hit with "I Pretend" in 1968. But he's definitely of the Steve Lawrence / Mike Douglas school and the performances here aren't exactly for the ages. In recent years British comedians like Ricky Gervais have spoofed his style, just as comedians do here with their American counterparts. There's a certain campy appeal about O'Connor, but not enough.

Once in a blue moon, a performer other than O'Connor gets to sing: Matt Munro, Sacha Distel (in Nehru jacket). There are a few highlights, but they're few and far between. Terry-Thomas appears in one extended sketch as a disc jockey who, live on the air, finds himself without a turntable to play any of his albums on. Winging it, he imitates several performers (Maurice Chevalier, Eartha Kitt) but saves the best for last - and sight of Terry-Thomas imitating Lee Marvin's infamous "Wanderin' Star" (from Paint Your Wagon) is almost worth the price of the disc. Other veterans like The Goon Show's Harry Secombe rise above the weak material.

DVD Talk was sent only check discs though they seem close to final product. Shot on videotape in color, the series is presented full frame and looks like other taped shows from the period - in other words, okay but not great, as is the mono English audio. The chapter stops are completely unhelpful in finding guests and specific performances, and nothing is dated or otherwise identified.

The only supplement is a still gallery that's mostly more shots of O'Connor, but it's pretty extensive.

A for-fans-only disc if ever there was one, Des O'Connor will delight fans of the popular entertainer, but it left this viewer bored with only a few bright flashes here and there. Skip It.