Legend of Drunken Master, The

Miramax // R // September 15, 2009
List Price: $39.99 [Buy now and save at Amazon]
Review by Stuart Galbraith IV | posted September 11, 2009 | E-mail the Author
Awash in mind-boggling action choreography that must be seen to be believed, The Legend of Drunken Master (1994) is an iconic if not quite typical Jackie Chan vehicle from his middle period, between the early days when he was unwisely fashioned as a successor to Bruce Lee's throne and prior to his homogenized, generally disappointing Hollywood career. Originally released as 醉拳 II (Jui Kuen II) in its native Hong Kong, in fact it's a sequel of sorts to the terrific Drunken Master, the seminal 1978 Yuen Woo-ping film that marked the beginning of Chan's best period.

The Miramax/Dimension Home Video Blu-ray is a disappointment, however. This version, running 102 1/2 minutes, is apparently the cut U.S. version that's been around for years, with altered music, sound effects, and dubbed into English, though Chan does his own voice. While alternate French and Spanish audio are included, the original Cantonese track is not. Further, the transfer is only fair, and a paltry single supplement, previously available on DVD, has one of the strangest encoding errors I've yet encountered. More on this below. 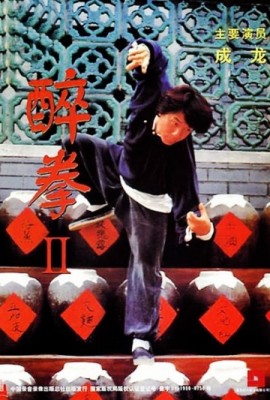 Unaware of the seal's value but fearing his father's wrath for the loss of the medicinal ginseng, Fei Hung becomes involved in an elaborate domestic cover-up with the help of his stepmother, Ling (Anita Mui), while the brutish Brits, accompanied by their traitorous Chinese henchmen - including incredibly agile Jon (Ken Lo), who wields his feet as weapons the way Leopold Stokowski wielded his baton - slowly but surely close in.

Though its action scenes are undeniably, hugely impressive, The Legend of Drunken Master is not entirely successful. For one thing, the casting is so strikingly off-kilter age-wise that it stays a nagging distraction throughout the picture. Though it's great to see Ti Lung 20 years after his peak period, he's just nine years older than Chan and looks it, while Mui, as Chan's stepmother, was nearly ten years younger than Chan and she looks it, too.

Another basic problem with the picture is its obvious struggle between wanting to be a throwback to an earlier, '70s-'80s style of kung fu film without disappointing Jackie Chan fans expecting a broader action comedy. Reportedly Chan and director Lau Kar-Leung specifically clashed over this, and that in the end Chan himself took over, directing the rather amazing set piece duel that climaxes the film.

The result is some wildly misplaced melodrama involving Fei Hung being ostracized from the family by his angry father, scenes I think the filmmakers intended for their audience to take at least semi-seriously. Conversely, Chan's hands seem tied to some degree; action is pretty much limited to fight scenes and with ordinary props, and generally devoid of the kind of outrageous set pieces for which Chan still has no peer: skydiving onto a hot-air balloon, dangling from a helicopter above Kuala Lumpur, etc.

Nevertheless, what Jackie Chan does for real in front of the cameras here is really something: In one scene he falls backwards onto a bed of burning coals, singeing his back as flames are kicked up all around him. If that weren't enough, about half his body is engulfed in flames in another scene, stunts like these made all the more impressive when one sees the blooper reel play out over the end titles, a perennial favorite of Jackie Chan fans. Here the audience gets to see just how painfully Chan suffered for his art. The best compliment I can pay Chan is to say that once the action stars, you simply cannot look away, even for a second. If you do, you'll probably miss six or seven incredible moves.

And as usual, Chan is equally inventive in his incorporation of props into his fancy footwork (and armwork, and neckwork, and...), just as Gene Kelly and Fred Astaire did dancing in their MGM musicals. Here Chan does amazing things with props as simple as a long stalk of splintered bamboo. Chan also is no spotlight hog; throughout the film he gives great little moments to various supporting players, like one scene where one of Chan's allies brings down an entire staircase full of bad guys with a single, mighty kick.

There's not much in the way of characterization though, and Jackie's pretty much the whole show. The late Anita Mui mugs shamelessly in the preferred Hong Kong style for such films; she has all the nuance of Betty Hutton in Annie Get Your Gun.

Despite various audio and subtitle options (including English, French, and Spanish audio and subtitles; Hebrew and other languages appeared on my Japanese player, but may not on U.S. players) the film's original Cantonese is not one of them, and this is a major loss. English dubbing just doesn't work for this kind of film; Asian languages don't synch at all well with English phrasing like many European languages acceptably do, and the broad acting style favored in Hong Kong coupled with overacting by dubbing Westerners unavoidably appears unsubtle and ludicrous to Western world eyes and ears. I also dislike any changes to a foreign production's original score and other mixing, as is the case here, to say nothing of the cuts.

The 1080p transfer, on a 50GB disc, is okay but unexceptional. The 2.35:1 Panavision image has decent color but is a tad soft; I was expecting something a lot grittier. I watched this immediately after a standard DVD, a Region 2 disc of Silver Bears, also in 'scope (Technovision) and was disheartened that the shift from SD to HD wasn't particularly dramatic. The 5.1 DTS-HD mix (from a Dolby Digital original) is nice, but then again, this is the English-dubbed version, so what does it really matter? The French, incidentally, is 5.1 Dolby Digital, while the Spanish is 2.0.

The only supplement is the previously available Behind the Master: An Interview with Jackie Chan running 6 1/2 minutes. On my player, around the :30 mark the 4:3 full frame image inexplicably burped, or something - I'm not sure how to describe it. Suddenly the 4:3 image became only the top left corner of the original image. Instead of Jackie Chan, I was now looking at very grainy video of the top right corner of his head. This bizarre effect may be limited to older players, but it did the same thing several times on mine.

If you already own the standard DVD of The Legend of Drunken Master I can't recommend that you rush out and upgrade because there's not a whole lot of "up-ing" here, and a future import version may give you a lot more for the same amount of money. If you haven't seen the film, itself enthusiastically recommended, you might consider Renting It before committing to a purchase.