Other // Unrated // September 29, 2009 // Region 0
List Price: $26.95 [Buy now and save at Amazon]
Review by Chris Neilson | posted October 2, 2009 | E-mail the Author
Jeremiah Zagar's In a Dream began as a short tribute film to his father, eccentric outsider artist Isaiah Zagar, best known for creating huge and elaborate mosaics along South Street in Philadelphia. When, in the midst of shooting, Jeremiah's brother Ezekiel entered drug rehab and Isaiah fell out of love with his wife and into bed with his assistant, In a Dream was recast into a feature-length documentary. 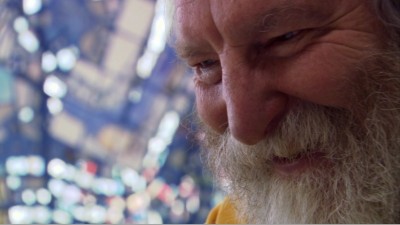 Isaiah Ziggler is an affable but utterly self-absorbed dreamer who, in his own words, is "fascinated by giganticness." An outsider artist all his professional life, Isaiah began his career painting countless self-portraits in watercolor. When his wife Julia complained that his work was too egocentric he expanded its scope to include her and eventually their sons Ezekiel and Jeremiah. Following a suicide attempt and institutionalization at age 29, Isaiah took up mosaics, presumably to give full reign to his fascination with giganticness. Having worked steadily on his art for nearly four decades, he's completed about a hundred mosaics, some of which cover entire buildings inside and out. 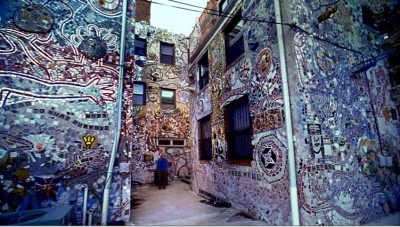 Befitting his oversized self-regard, Isaiah is the hub around which his family turns. His more sensible wife Julia found her opposite in Isaiah: "I was his reality base and he was my bird. He flew around me." The boys grew up and still remain in their father's orbit. When Ezekiel moves home suffering a drug addiction that ruined his marriage and career, Isaiah is oblivious to his son's situation. When Ezekiel then asks to be checked into a rehab facility, Isaiah can't be bothered to take him. And, on the day that Ezekiel is due to check out of the facility, Isaiah nonchalantly drops the bombshell on his family that he's having an affair with his assistant and that he no longer has any sexual desire for Julia and hasn't for many years.

On the night of Ezekiel's homecoming, Isaiah moves in with his assistant, prompting Ezekiel to return to the rehab facility. When Isaiah quickly concludes that his life was more fun in the bosom of his family, he unceremoniously dumps his mistress and seeks to reconcile with Julia while dramatically eliciting concern from his family for his delicate mental condition by claiming that he may need to be institutionalized again. In what should come as a surprise to nobody, Isaiah eventually gets his way and is welcomed back home.

The debut feature-length film from Jeremiah Zagar, In a Dream is an exquisit documentary. With finely-crafted direction from Erik Messerschmidt and Mark Stetz's cinematography, to the score by The Books, to the engaging on screen animations of Isaiah's artwork, all the elements serve Jeremiah Zagar's artfully-wrought story admirably. Ultimately, however, despite the fine production quality, In a Dream is burdened by a risibly mundane story of male folly that no amount of craftsmanship and colorful characters can rescue from the worst kind of cliché: Husband leaves wife for mistress, misses the comforts of home, and after much misery all around returns to wife.

Presentation
Video:
In a Dream is presented in anamorphic widescreen (1.78:1 aspect ratio). Shot in a variety of formats ranging from DV to 35mm, In a Dream looks incredible. With all but the most primitive setups, colors are vivid, contrast is excellent, and detail is sharp. Given the limitations of the personal documentary, it's hard to imagine how In a Dream could look better and retain its fluid spontaneity.

Audio:
The 2.0 stereo mix sounds dynamic. The audio is free of dropouts and dialogue is clear and distinct from the score. No subtitles are available for this release, unfortunately.

Extras:
In a Dream includes a bevvy of extras including an alternative ending, deleted scenes, a music video, three short films about Isaiah Zagar two of which are by Jeremiah, a theatrical trailer, and several trailers for other releases from Indiepix. The most obvious omission is a commentary track with the filmmaker and his family.

Final Thoughts:
In a Dream is an expertly crafted documentary, but there's nothing in it that viewers haven't read, seen, or experienced already: a narcissist pursues his own joy to the detriment of his family, eventually ending right where he began. With this film completed, hopefully the obviously talented Jeremiah Zagar will move on to better subject matter.