Sony Pictures // R // October 20, 2009 // Region 0
List Price: $38.96 [Buy now and save at Amazon]
Review by Stuart Galbraith IV | posted November 20, 2009 | E-mail the Author
Easy Rider (1969), the seminal '60s movie that convinced the old dinosaurs running Hollywood that the future of their industry might very well lie with the sometimes crazy but undeniably innovative young upstarts whose films were cheap, acclaimed, and most importantly profitable, officially launched a new era of American film (though the shift had already been several years in the making). Seen today, the picture is still very impressive in some respects, less so in others. It's really more of a transitional work, an ambitious shift away from the AIP-type biker-picture exploitation of The Wild Angels (1966), which starred Peter Fonda, The Glory Stompers (1968) top-lining Dennis Hopper, and Hells Angels on Wheels (1968), featuring Jack Nicholson. Clearly, Easy Rider has grander aspirations but it's also occasionally pretentious and alternately authentic and phony. Overall it's a very fine film, even if you had to be there, seeing it at a drive-in in 1969, to get its full impact.

Sony's Blu-ray offers a flawless high-def rendering with superbly remixed audio. The extras are adequate but there's almost nothing that wasn't on the initial DVD release from way back in early-1999. 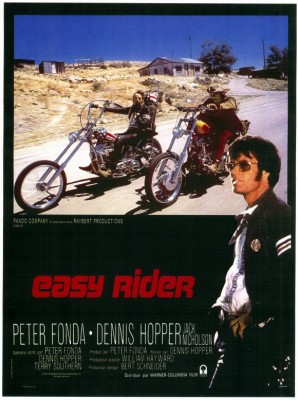 Hippie-bikers Billy (Dennis Hopper, who directed the film) and Wyatt (Peter Fonda, who co-wrote it with Hopper and Terry Southern), nicknamed "Captain America," smuggle cocaine from Mexico to Los Angeles - selling it, ironically enough, to the now-infamous Phil Spector, billed in the credits as "Connection." Hiding their drug money in a watertight plastic tube hidden in the gas tank of Wyatt's chopper, the pair decides to celebrate their newfound (financial) freedom by driving cross-country to New Orleans in time for Mardi Gras.

Their initial euphoria is short-lived. Even run-down roadside motels refuse their business, owners frightened and/or repulsed by their appearance if not their manner (Billy and Wyatt are quite polite throughout the film). Local police look for any excuse to arrest them, and redneck types threaten their very safety. Only other hippies, poor people and minorities treat them with kindness.

Billy, rather like the actor-director playing him, spends his days and nights lost in a haze of booze and marijuana, living only for the moment, but also short-tempered and somewhat paranoid. Wyatt, conversely, is more introspective, looking for meaning in his life and gradually aware he's not finding it on the road with Billy.

Wyatt is drawn to the harsh but liberating life at a large desert commune, where one of its members (Luana Anders) is attracted to him. Pressured by Billy to move on, the pair hit the road again, eventually becoming friendly with an alcoholic but genial attorney, George Hanson (Jack Nicholson) who, like Billy and Wyatt, finds the concept of dropping out of society appealing but realizes such absolute freedom frightens mainstream society: "They're scared of what you represent to 'em," he says.

Easy Rider's profound impact is easier to understand when you consider, for instance, that the year before this was made Dennis Hopper was still guest-starring on TV shows like The Big Valley and Combat, or with films like Skidoo and Star! in the pipeline, how out-of-touch mainstream Hollywood had become.

Though dated in some respects, in other ways it takes chances few would even today, especially its graphic, non-judgmental use of cocaine, LSD, and marijuana, the latter reportedly smoked on-camera for real. At a time when cop Joe Friday was preaching drug abstinence to phony, wig-wearing "hippies" on Dragnet 1969, Easy Rider presented a counterculture perspective more authentic than most, even if it was filtered through a Hollywood elite. Its commune is less idealized than the one in Billy Jack, and while you can still see the acting in Fonda's disenchanted Captain America, Hopper's Billy is the real deal - he's like the kind of crazy, zonked-out homeless men one sees picking through garbage cans on skid row, man.

The film established director and co-writer Hopper as a major talent, this despite the fact that he was by all accounts a bloody terror on the set, and that he had to be persuaded to abandon his original cut, one more than twice as long as the finished film. Director-writer-actor Henry Jaglom was chiefly responsible for whittling the film down to its present length. His name is buried in the credits as an (editorial) consultant.

In any case, the cutting of the picture accounts for much of its impact. The subjective LSD experience in New Orleans works (better than, say, in Roger Corman's The Trip, with Peter Fonda) because of the cutting; indeed, (uh, I'm told) it comes closer to capturing the indescribable experience of LSD better than just about any film before or since. The cinematography, by László Kovács, and the flawlessly selected use of contemporary popular music - Steppenwolf's "The Pusher," The Band's "The Weight," Bob Dylan's "It's Alright Ma (I'm Only Bleeding)," performed by Roger McGuinn, etc. - are all exactly right. 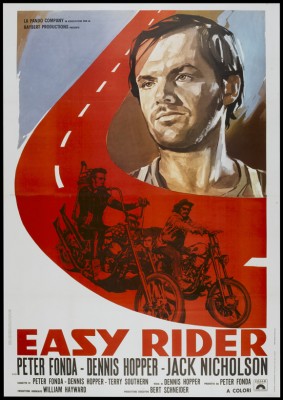 Hey - And just who do you think is the star of this picture?

The region-free Easy Rider looks great, essentially perfect. Shot for 1.85:1 cropping, it's presented here in full-frame 1080p 1.78:1 and a very fine film grain is present throughout. The image is sharp while the colors are true to the original presentation, its societal landscape/road movie qualities really shining in this high-def release. Some of the film (mostly, I believe, in the Mardi Gras and LSD scenes) was shot in 16mm. That footage is definitely grainier, but not distractingly so.

Easy Rider's original mono track has been preserved here, but the real surprise is the outstanding remix, in Dolby TrueHD 5.1 (in English, French, and Portuguese), which is a revelation. Without drawing attention to itself there's a lot of nice directional audio while the film's song-heavy score bursts with the clarity of an IMAX concert film (without ever drowning out the dialogue, a problem with some early Sony releases). A 5.1 Dolby Digital Spanish mix is also included, along with optional subtitles in all those languages.

Supplements are identical to earlier standard-def DVD releases. The "hardcover" packaging includes an excellent souvenir program-like, full-color booklet with notes about the soundtrack, short bios, and a terrific contextual essay by Travis Baker. Easy Rider: Shaking the Cage (1999) is a feature-length documentary (in standard-def full-frame) about the film, featuring interviews with most of the surviving cast and key crew. Hopper talks about the film some more in an audio commentary track, the kind that could have used a film critic/historian in the studio to prompt him during the lulls. The only, sort-of, new extra is "movieIQ," with real-time movie information about the film available only via BD-Live.

Though more significant for its role in shaping post-Classical Hollywood, Easy Rider is still a powerful, pessimistic expression of a generation's yearning for the kind of liberation perhaps not possible even in 1969, much less 40 years later. Except for a pristine 35mm print in a theater, this high-def release is definitely the way to see it, even with its limited, previously available extra features. A DVD Talk Collector Series title.