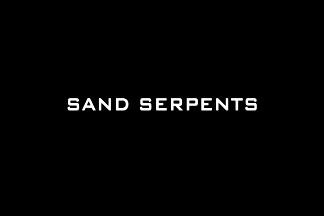 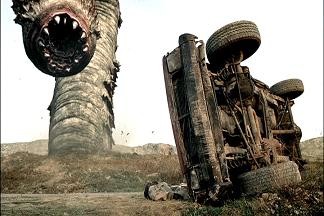 Sand Serpents is the latest entry in this series, and it follows the Maneater Series template to a tee. A poorly-realized CG creature menace is responsible for some requisite murder and mayhem, and it's up to a has-been actor to deal with it.

Jason Gedrick, the guy who once starred in such '80s cheese as Iron Eagle and The Heavenly Kid, is called upon here as the one-time in-demand actor to play the lead. Gedrick plays Lieutenant Stanley, in charge of a unit of US soldiers on a mission in Afghanistan. During a firefight with Taliban forces, an explosion awakens ancient prehistoric carnivorous worms that proceed to wreak havoc on the characters of the film. So, it's up to Stanley and the cute Jan (Tamara Hope) to lead a ragtag combination of US soldiers and Afghan civilians against the titular sand serpents.

And there you have it. Like the majority of entries in the Maneater Series that I've seen, Sand Serpents is pure schlock, but as such, it does offer some moments of goofy CG-carnage to warrant a look for fans of such fare. Setting the antics in war-torn Afghanistan seems tacky given the current global climate, but perhaps the most egregious affront the film commits is its premise, a clichéd remix of Dune and Tremors. The "sand serpents" here visually hearken back to the memorable creatures of those much better films. They're attracted to sound, of course, and their imminent arrival is announced by the shaking of the camera . . . er, I mean earthquakes . . . which obviously is a standard device for fright fare with such creatures.

Still, the cast seems up for the shenanigans that Raul Sanchez Inglis's screenplay envisions. And the action, albeit rote and expected, occurs often enough to keep one's interest. Sand Serpents isn't a good film per se, but it's average for the Maneater Series - and fans will want to check it out as a rental. 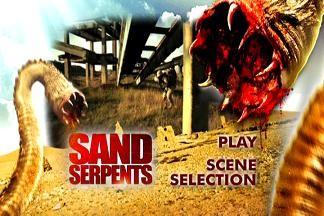 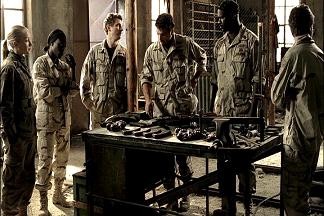 Genius Entertainment gives Sand Serpents an anamorphic widescreen presentation that it claims "preserve[s] the aspect ratio of its original television exhibition." Details and colors are strong.

The lone audio track is an English language Dolby Digital 5.1 affair. Dialogue is always clear, and the mix is fairly dynamic during action sequences.

Neither language nor subtitle options are made available.

Trailers precede the main menu for Carny, Rise of the Gargoyles, Sea Beast, and Backwoods. And that's it for extras.

Sand Serpents, the latest entry in Genius Entertainment's Maneater Series of recycled SyFy Channel original movies, offers a cheesy rehash of the creatures from Dune and Tremors. Fans of the series will want to check it out as rental; everyone else can safely skip it.