Zeitgeist Video // Unrated // January 26, 2010
List Price: $29.99 [Buy now and save at Amazon]
Review by Chris Neilson | posted February 2, 2010 | E-mail the Author
So much of our daily lives are predictably routine to the point in which we can operate more or less by rote that when we are confronted with unexpected randomness we are startled. Few events are more psychologically jarring than witnessing, or worse yet personally suffering, a lighting strike. While cancer and car wrecks can cause us to question why us and wonder whether there's a meaning or agency behind it, being struck by lightning is the quintessential manifestation of this metaphysical quandary -- is it randomness incarnate or supernatural will? 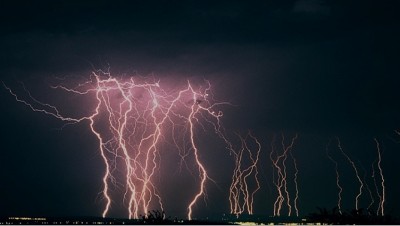 Canadian documentary filmmaker Jennifer Baichwal has been interested in the intersection between art and philosophy since graduating from Montreal's McGill University with a master's degree in philosophy and theology. Since turning to documentary filmmaking, she's mused on the life and art of an enigmatic novelist (Let it Come Down: the Life of Paul Bowles), the nature of photography as constructed reality (The True Meaning of Pictures: Shelby Lee Adams' Appalachia), and on the regimentation of human activity and the ruin of the natural world by industrial processes as framed through first a photographer's lens and then further mediated by a film camera (Manufactured Landscapes). Baichwal's interests in the junction of philosophy and art are displayed again in her latest documentary, Act of God, a metaphysical exploration of randomness and intention through electricity, specifically lightning and brain waves.

It's rare that anybody thinks of electricity in a context other than as a power source for technological devices, but electrical activity is all around us and within us. At any given moment, about 1800 thunderstorms are discharging lightning across the globe, while within our heads, electrical impulses are constantly firing but never as intensely as when we're faced with the unexpected. Baichwal confronts all this through an extended look at lightning strikes offset against an examination of the brainwaves of a musician at work.

Baichwal and her cinematographer/husband Nick de Pencier travel to France, Cuba, Mexico, and across the United States and Canada interviewing people directly affected by lightning. In France, a camera-shy curator of lightning's artifacts admits to being a compulsive storm-chaser. In Cuba the worship of a Pagan Thunder God is intermixed with Catholicism. In rural Mexico, an Indian woman whose two children, along with three others, were struck dead while praying at the foot of a large outdoor cross chooses to believe that the deaths were God's will, and in Las Vegas, a man struck by lightning and revived twenty-eight minutes after being declared clinically dead, speaks of redirecting his life after meeting supernatural agents on the other side of death.

Apart from those who've chosen to embrace supernatural explanations, are those struck by the paradox of randomness -- the appearance of conscious design where reason says there is none. Baichwal's subject Canadian playwright James O'Reilly, who survived being struck by lightning which killed his friend, sums up the ambivalence experienced by many survivors: "I can't accept that it happened for a reason, nor can I really accept that there is no reason. The only way to carry on is to be humble, and a little bit in awe of these things you can't really understand." Novelist Paul Auster, who at age 14 saw another boy struck dead by lighting refuses to see anything more than randomness in the event, but his fiction is thoroughly imbued with elements of foreboding, natural disaster, and absurd coincidence, evidencing an indelible impact.

The counterpoint to these stories of lightning strikes concerns the mind and music of improvisational guitarist Fred Frith. While hooked up to an elaborate brain scanner, Frith is asked first to perform a memorized piece of music and then to improvise an original piece. As Frith plays the memorized piece, the readout indicates slow steady electrical impulses in his brain more what one would expect from a comatose person than a music at work, but while improvising his scan comes alive with a storm of furious activity. According to neurologist Chris Frith (Fred's brother) who interprets the graph, this furry of activity is attributable to the brain attempting to predict what will happen next even as it creates the piece.

Presentation
Video & Audio:
Act of God is presented in anamorphic widescreen (1.78:1). With the exception of some footage from other sources, video quality is very good with lifelike colors and good detail.

The 2.0 Dolby Digital audio is adequate to its purpose, free of dropouts and distortions with voices generally clear and understandable. Forced English subtitles are provided for non-English speakers, and optional close-captioning is also provided.

Extras:
Extras include a four-page insert with an essay by the filmmaker and production notes, an interview with the filmmaker (12:35), 46 minutes of additional scenes (letterboxed) including four readings by Paul Auster, two performances by Fred Frith, an interview with Peter Greenaway. Also included is Greenaway's made-for-TV documentary Lightning: An Act of God (27 min, 1980). Finally, letterboxed trailers for this film and Manufactured Landscapes are also provided.

Final Thoughts:
Viewers hoping for a conventional science or natural disaster documentary will be disappointed. Act of God is oblique and, at times, seemingly scatter shot in its approach, and is less concerned with lightning as a natural phenomenon than as the paradox of randomness made concrete. At times, the vivid storm footage and earnest interviews with people struggling to make sense of their experiences provoke curiosity and a sense of welcomed unease, but at other times overlong examination of minutia such as diagrams of who stood where when the lightning struck may have you counting the minutes. Though not heady enough to prompt repeated viewings, overall, Act of God is worth a look.