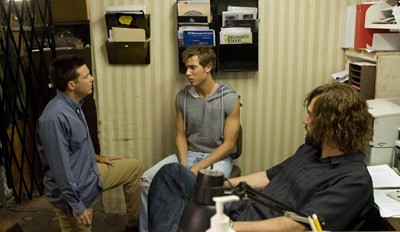 Mike Judge's Office Space is a classic entry in the workplace comedy genre, and ten years after that movie began tickling the funny bone of popular culture, its mastermind has returned to the trenches of everyday life for his third full-length motion picture, Extract. This time, rather than finding his laughs amongst the cubicles of a mid-level software company, the writer/director has set his movie in a small factory that makes cooking extracts--almond, vanilla, smores, and other flavors. It's a rather inconsequential product. Bland even. But then, so is the man who runs it.

Arrested Development's Jason Bateman plays Joel, the likable head of Reynolds Extract. Joel was once a man with a dream. As a child, he wondered why his mother's root beer-flavored cookies always tasted better as raw dough, and as an adult with a masters degree in chemistry, he developed a root beer extract that would not evaporate when cooked. This lead to a successful business, a large home, and ultimately, stagnation. His marriage to Suzie (SNL-cast member Kristen Wiig) has gone stale, and he knows that his life's work is boring. The flavor of his existence has evaporated.

So, when General Mills gets serious about buying Reynolds, Joel is ready to take the money and head for sunnier climes. If only life was that easy. A workplace accident leaves one of Joel's many slow-witted employees (Clifton Collins Jr.) with only one testicle, and a pretty con woman named Cindy (Mila Kunis, Forgetting Sarah Marshall) thinks she has found her new big ticket. She gets close to the injured man and convinces him to sue for a huge settlement, so big it will bankrupt the company and kill the sale. She also gets a job at the factory, which she sticks with long after her reasons for taking it are no longer valid. It's almost as if she knew she were a plot device to distract Joel and jumpstart his midlife crisis. Pretty soon he's doing bong hits and hiring gigolos to seduce his wife. It's a long way to go to convince himself that he can sleep with Cindy, but he's looking to going the distance. 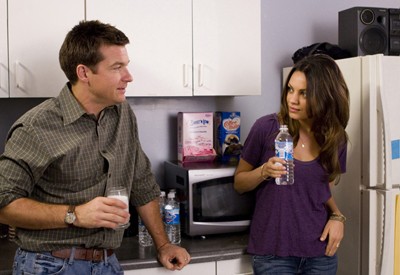 Extract has a pretty funny trailer, and its on-paper plot is complicated enough and ludicrous enough that there is no reason it shouldn't yield laughs, especially when hatched by a talented comedic mind like Mike Judge. (He also created the cartoon series Beavis and Butthead and King of the Hill and directed the underrated Idiocracy.) Unfortunately, that comedic mind comes off as dulled here. It's almost as if Judge has been partaking of the weed and the Xanax that keeps getting pushed on Joel, because Extract has a stoned, laconic pacing that stops it from ever quite taking off. The filmmaker is perfectly content with intermittent guffaws followed by long stretches of mild amusement.

What funny stuff there is comes mostly from supporting players who flit in and out of the main narrative, thus causing the inconsistency in quality. J.K. Simmons is very good as Joel's right-hand man whose disgust with their lazy staff manifests in a panoply of derogatory nicknames. The normally over-the-top David Koechner, best known for playing loudmouths like Champ Kind in Anchorman, does a 180 here as a talkative but completely dull neighbor that won't leave Joel alone--and indeed, gets the biggest laugh for the most inappropriate of reasons in the last ten minutes of the movie, suggesting maybe Extract would have been better off going darker.

Also very funny is a nearly unrecognizable Ben Affleck, sporting a long haircut and implausible beard to play Joel's pal the bartender, dispenser of drugs and bad advice. Affleck goes after the material with surprising relish. His stoner wisdom and the verbal craftiness with which its delivered lift the movie's energy level every time he is on screen. It's the kind of pep that the rest of Extract lacks. Even a script as underdeveloped as this could still be thoroughly entertaining if presented with zazz. Like so much else, though, the zazz is nowhere to be found.

When the jokes go missing in action, that only leaves the audience with a plot that doesn't quite satisfy. As our hero, Joel is sympathetic, but he has no real character arc. His downward spiral ends up losing steam, kind of like a wobbly toy top that didn't get enough spin. Once the dizziness is done, he just brushes himself off and moves on. Hell, he barely even gets mad. I think the major source of the anemia is a lack of any depth in the writing of the two major female roles. Neither Kristen Wiig nor Mila Kunis are used all that much. In fact, Cindy's flirtations with Joel never go anywhere, he always talks himself out of going through with the infidelity. As the agent of chaos that is supposed to unmoor his life, Cindy mainly keeps her distance. We never get to know her, nor do we get to know Suzie. They don't even end up being the wrong choice or the right one. That side of the plot gets such short shrift, you almost have to wonder if the budget just couldn't afford to pay Kunis to film the whole thing and so Judge just took what he could get. She's too talented to be given so little. The whole cast is. Well, except for walking rock-'n'-roll cadaver Gene Simmons, whose oafish turn as dishonest lawyer is the worst kind of cameo, one that relies solely on the guest's reputation as a clown rather than writing real jokes for him.

It's too bad, all the pieces are here, but Extract ends up being a bit like the product that has lent the film its name: it may fool you into thinking its a bona fide comedy, but it's really only the simulated essence of such. It's amiable enough and has enough good scenes that it would be worth watching at home with a couple of cocktails and other things to distract you during the slow bits, but not really worth the effort of going out and paying full ticket price for. Save those shekels for something more robust.