Shout Factory // Unrated // December 15, 2009
List Price: $49.99 [Buy now and save at Amazon]
Review by Stuart Galbraith IV | posted December 16, 2009 | E-mail the Author
Adapted from John Jay Osborn, Jr.'s 1970 novel and the 1973 film it inspired, The Paper Chase was an impressive Harvard Law School drama (Harvard in all but name, that is) on CBS's prime time schedule for the 1978-79 season. Despite rave reviews it was a ratings flop and lasted just one season, but the series - even in its short run - gradually took on a life of its own. In a highly unusual move, first season episodes were rebroadcast on public television, PBS, and those airings proved popular enough that in 1983 the burgeoning cable network Showtime brought the series back, with new episodes premiering at an agonizingly slow rate for the next several years, albeit in increasingly shortened "seasons."

When Shout! Factory brought Season One of The Paper Chase to DVD last April, many wondered if the rest of the series would be released at all, considering the presumably complex ownership particulars in shifting the series from CBS over to Showtime, complexities no doubt the show's characters would have appreciated.

And yet, The Paper Chase - Season Two (regrettably not being sold under its actual onscreen name: The Paper Chase - The Second Year) is now available, though as has become all too common with Shout! Factory TV titles, this most welcome release is marred by lackluster elements: a few shows are very slightly edited syndicated versions and, unaccountably, the audio on a few shows is almost terrible. Fortunately, the series is too good not to be enjoyed despite these video/audio issues. 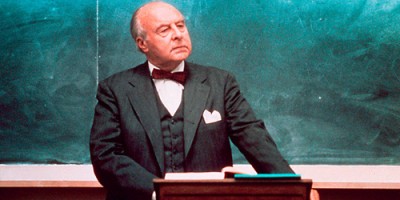 The Second Year (1983-84) finds Minnesota-born law student James T. Hart (James Stephens) something of a celebrity among his classmates, the only student to ace the Harvard contract law course famously taught by legendary Professor Charles W. Kingsfield, Jr. (John Houseman), whose brutal, challenging Socratic lectures and icy, intimidating demeanor terrorize all. "You teach yourselves the law. I train your minds," Kingsfield would say at the beginning of each term. "You come in here with a skull full of mush, and if you survive, you'll leave thinking like a lawyer."

While Hart settles in to his less panic-stricken second year, younger students ("1Ls") desperate for advice all but lay siege on the apartment he shares with silver-spooned 2L Franklin Ford III (Tom Fitzsimmons). Perhaps because Ford's career is all but assured anyway, he's less dedicated and more interested in meeting women and enjoying campus life. Hart meanwhile lands a prestigious position on the school's Law Review, edited by demanding Gerald Golden (Michael Tucci). Elsewhere, another friend of Hart's, Willis Bell (James Keane), supervises the dormitory where most of the first year students reside. (Despite his deceptively patsy-like appearance, Bell is held in high regard by Kingsfield, almost on a par with Hart.)

While Stephens, Houseman, Fitzsimmons, and Keane return from the CBS version of the show, other supporting characters come and go throughout the second season. Jane Kaczmarek (Malcom in the Middle), as a struggling first year law student, is introduced as a new love interest for Hart, but by the end of the season she's gone and others take her place, including busy actress Penny Johnson (24).

The Paper Chase wasn't the first series to switch networks mid-stream, but it may have been the first Big Three network drama to move to cable, and to do so with most of the key cast intact after a nearly five-year hiatus is perhaps unique. It was one of cable's first original dramas; when it debuted on tax day in 1983 cable television service wasn't even available in my suburban Detroit neighborhood (though HBO's satellite service was). I had to wait until the following summer even for the chance to catch up with the series and then once I had, was dismayed to realize that in an effort to retain subscribers Showtime was rationing out new shows at about one a month, too few to really justify the expense.

I hadn't seen The Paper Chase since the mid-1980s, but looking at these episodes again I was surprised at just how well they hold up compared to other, equally fine but now dated dramas from the same period, and how well I remembered the shows I hadn't seen in nearly a quarter-century, so strong an impression did they make.

The writing and the two leading performances make The Paper Chase the great success that it is. Osborn himself wrote more than a third of the season's 19 hour-long episodes; those written by others are for the most part just as good, with the season's best-remembered episode, "Not Prince Hamlet," penned by Lee Kalcheim. That show, a variation of Rashomon, is a flashbacks story about a father trying to understand why his law student son committed suicide.

The movie and subsequent series made a star out of Houseman, primarily a stage and film producer before 1973. His measured and erudite delivery, with a hint of perpetual mild impatience in which he seemed to emphasize every fifth word or so, became famous in a series of TV commercials ("Smith Barney make money the old-fashioned way: they earn it.") As Kingsfield, Houseman's ability to intimidate almost reaches through the TV screen to throttle the viewer.

But James Stephens is equally fine and singularly underrated as Hart. Throughout the history of movies and TV shows, the stereotypical scientist or scholar wasn't allowed to be both intellectual and socially adept and, heaven forbid, popular (and sexually active with attractive women to boot), but Hart was an exception. His was an enormously likeable and accessible character, whose passion for the law came through Stephens's sincere, understated performances. Indeed, though not quite the show's core, Hart's burning desire to understand the legal and moral complexities of the law proved enormously fascinating and infectious, no doubt inspiring many to take up the bar. More intriguing, and conveyed extremely well in Stephens's acting, is Hart's unending fascination, obsession even, with the emotionally aloof Kingsfield. Like a determined code breaker, Hart gradually recognizes purpose in Kingsfield's regular humiliations of his students, how his cold-blooded style and all consuming, demanding courses are to his law students what boot camp is to a Marine.

The show's producers wisely bend with Kingsfield only very slightly; they don't make the mistake of softening him up like, say, Norman Lear/Carroll O'Connor did with All in the Family. Instead, the character is humanized not by any change in Kingsfield's character, but rather through Hart's gradual recognition of it. There's an early scene in the first episode of the Second Year where Hart, confident after having received the only "A" in Kingsfield's first year class, thanks the old professor for inviting him to participate in a special seminar. Hart's polite but chummy expression is met with a withering response: "And your name is...?" Hart is momentarily surprised, but as Kingsfield walks away, unimpressed, Hart smiles to himself in amused understanding of Kingsfield's psychological sleight-of-hand. Moments like these made the show.

The revised series was produced on an obviously reduced though not inadequate budget. It relied on a few basic sets: Kingsfield's office, the lecture hall, Hart's apartment, and the local bar, with the area around USC's Doheny Library doubling Harvard for exteriors. (The same space doubled for UC-Berkeley in The Graduate.)

Shot on film but apparently finished on tape, The Paper Chase - Season Two comes to DVD courtesy Shout! Factory and their almost signature transfer issues. Spread over six single-sided, dual layered DVDs, the full frame shows look a bit soft but the bigger problem is that four episodes of the first six are edited syndication versions because the "Showtime master could not be sourced." Why not? If the series is being sublicensed from its present owners, 20th Century-Fox, why couldn't they access Showtime's masters on Shout! Factory's behalf? One would think Fox would be legally entitled to them, right? Another problem is the sound; the mono audio is fine most of the time but in some scenes the sound will suddenly become ragged and distorted, like they had to resort to some fourth-generation source. At least the problematic episodes are identified, and the packaging provides airdates and other capsule information. There are no Extra Features.

This release is Highly Recommended because of the show's merits, and in spite of the DVD's transfer issues. It's one of the great TV dramas of the 1980s, really a must-see.