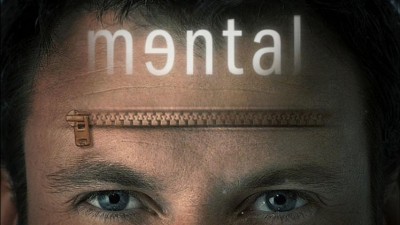 Medical shows are nothing new to television. There have been many successful series, such as ER, Grey's Anatomy, and House. Of them all, Mental is somewhat similar to House. However, this show focuses on mental health issues versus difficult to diagnose medical problems. Unfortunately, Mental doesn't come close to House and lacks the same chemistry, intrigue, and likeability with its characters. Instead, Mental tends to have little appeal: the characters aren't special and the mental health issues are drawn out and lackluster. In the end, this series probably isn't worth your time. I had a tough time sitting through its thirteen episodes.

The series' main character is Dr. Jack Gallagher (Chris Vance). Gallagher is a British doctor who has recently taken charge of Health Mental Services at Wharton Memorial Hospital. His appointment as the new director has ruffled some feathers. Notably, Dr. Carl Belle (Derek Webster) is not happy with Gallagher. He works behind the scenes to discredit Gallagher and ultimately, take over as director. Gallagher uses nontraditional methods to treat patients. It is very clear in the pilot episode's opening when he removes all of his clothes (in front of everyone) to gain a patient's trust. Throughout the rest of the series, Gallagher takes on similar approaches to help uncover the mysteries behind his patient's alignments.

The other characters in this show include Nora Skoff (Annabella Sciorra), the hospital administrator who has a past with Gallagher, Dr. Veronica Hayden-Jones (Jacqueline McKenzie), a fellow psychiatrist who was also in line for Jack's job, Dr. Chloe Artis (Marisa Ramirez), a resident who feels her job is beneath her, and Dr. Arturo Suarez (Nicholas Gonzalez), an eager resident trying to prove his own. For the most part, none of these characters really stand out. There is character development, such as Veronica's affair with another doctor and Arturo pursuing Chloe despite her being a lesbian. However, these developments never stand out, nor do they make you interested in the characters.

As earlier mentioned, the main focus of the series is Gallagher taking unorthodox approaches to helping his patients. The mental health staff faces some odd cases, which cannot be diagnosed/treated with conventional means. Gallagher's constant pushing of the envelope causes distress amongst the hospital administration, but he always gets results. The series premiere "Pilot" deals with Gallagher's introduction, as he strips down naked to gain a patient's trust. Apparently, the patient suffers from hallucinations and is off his medication. Gallagher goes out of his way to make sure he is reunited with his family versus putting him away in long term care. The case is not very deep, but the emotional aspect of Gallagher trying to do what is best for the patient highlights his intentions as a doctor: to help people.

In the following episode "A Beautiful Delusion", the doctors at the hospital are baffled when a woman comes in for pregnancy issues. When they do their tests, they find out that she is not physically pregnant. Gallagher and staff take on the case. He is intrigued because she believes that she is pregnant. It turns out her husband is a doctor with some mental issues. The mental health team must race against the clock to treat the patient, because the husband wants to take her home and they cannot force her to stay. As the season continues, they deal with bipolar disorder, split personality, obsessive compulsive disorder, suicide, autism, post-traumatic stress disorder, and more.

Underneath the story of the week episodes, there are reoccurring plotlines. The biggest development is about Gallagher's twin sister Becky, who suffers from schizophrenia. She has been missing for several years, but frequently calls him and hangs up. As this storyline develops, Gallagher attempts to locate her. The other notable plotline is Belle's attempts to discredit and remove Gallagher from the hospital. He even goes as far to blackmail another doctor to get dirt on Gallagher.

Overall, Mental does not have a lot of appeal. It has been credited as a show like House, which is true to a certain degree in that they treat patients and mysterious health-related issues. Unfortunately, Mental lacks in many areas and it is not very interesting. From the characters to the patients, there is little intrigue or entertainment. Skip this one. 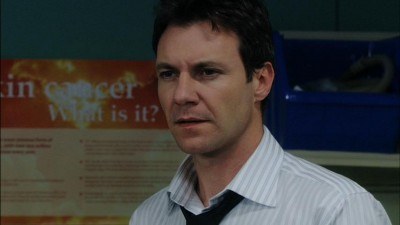 1. Pilot: Dr. Jack Gallagher (Chris Vance) arrives at his new job and uses unorthodox methods to gain a patient's trust in the pilot of a drama that follows a maverick psychiatrist and his clashes with the conservative hospital administrator (Annabella Sciorra), his ex-lover.
2. A Beautiful Delusion: Gallagher treats a woman who believes she is seven months pregnant---but is not pregnant at all. Her husband also shares her delusion. Elsewhere, Gallagher searches for his mentally ill sister, Becky, whom he thinks is homeless on the streets of L.A.
3. Book of Judges: A famous author-professor (David Carradine) and his wife are struck by lightning. She is killed; he is catatonic. Jack tries to bring the author back to reality using a risky, unorthodox treatment. Meanwhile, the attraction between Jack and the patient's daughter (Estella Warren) adds another wrinkle to the case.
4. Manic at the Disco: Jack treats a bipolar 8-year-old boy (Billy Unger) who's obsessed with playing a video game that only exists in his own head. Meanwhile, Nora learns that her teenage daughter is posting racy photos of herself on the Internet, and Jack continues looking for his mentally ill sister, whom he believes is homeless in Los Angeles.
5. Roles of Engagement: After a movie star (Tom Parker) has a mental breakdown on a talk show, he claims to the hospital staff that he faked the psychotic episode to publicize a new movie in which he plays a mental patient. Jack is determined to get to the truth. Meanwhile, Nora and Veronica have a girls' night out and share some details about their romantic pasts with Wharton employees. Spike Feresten has a cameo.
6. Rainy Days: Jack treats a suicidal gambling addict (Willie Garson) and testifies on behalf of another patient charged with manslaughter by a prosecutor (Lori Heuring) who has never lost a case. Elsewhere, Jack and the team meet for a poker game after work, and sparks fly between Rylan and Veronica.
7. Obsessively Yours: A patient returns with worsening OCD and Tourette's syndrome, and his wife pushes for unproven brain surgery, leading the team to suspect that the wife has her own issues. Meanwhile, Jack becomes infatuated with a neurosurgeon (Jaime Ray Newman).
8. House of Mirrors: Jack treats a suicidal 16-year-old girl (Allison Scagliotti) who has had a dark secret hidden from her since birth. Meanwhile, Jack's relationship with Dr. Avidan (Jaime Ray Newman) deepens, and he continues his search for his schizophrenic twin sister.
9. Coda: Jack is embroiled in a murder mystery when a drug dealer is murdered and the only witness is the victim's autistic teenage daughter. Detectives struggle to get any useful information from the teen, but Jack uses unconventional methods to glean clues from her statements. Meanwhile, Arturo gets a visit from his father, (Steven Bauer) who is convinced that playing a doctor on a soap opera will help him solve a real medical case.
10. Do Over: Jack treats a construction worker (Trevor Morgan) who has physiological and psychological symptoms after an accident on the job. The doc learns the man's memory of his accident doesn't match what happened, but instead matches a more serious accident that occurred at the same job site more than 100 years ago.
11. Lines in the Sand: Jack is reunited with his schizophrenic sister (Amanda Dogue), and he makes treating her a top priority. Meanwhile, Veronica asks for Jack's help with an Iraq War veteran suffering from amnesia and post-traumatic stress disorder. Major Arlen Rawlins: Glenn Morshower.
12. Life & Limb: A factory worker is admitted to the hospital with dismembered fingers, but refuses surgery to have them reattached. Meanwhile, Jack argues over the course of his schizophrenic sister's care with his colleagues and parents, who have power of attorney over her affairs.
13. Bad Moon Rising: A man (Joseph D. Reitman) claims to be a werewolf and takes the psych-ward staff hostage to prove he's right. 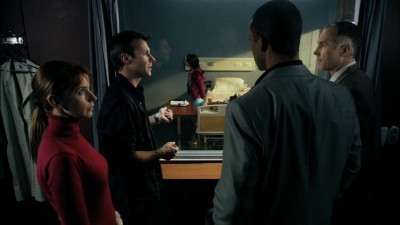 
Video:
The video in this release is given in anamorphic 1.78:1 ratio widescreen color. The picture quality is generally good with detail looking sharp and no issues with colors. However it does have a slight grain, which is more noticeable during darker scenes. There are also some minor traces of edge enhancement.

Audio:
The audio in this release is given in English 5.1 Dolby digital surround sound. Overall, the sound quality is very good, providing an audible and clean audio track. The majority of activity is in the forward channels, but there is decent use of the surround sound capability. Music and sound effects sound very rich and vibrant. There are subtitles in English, French, Portuguese, and Spanish.

Final Thoughts:
I was unimpressed with Mental. I tried to enjoy the series, but as I watched its thirteen episodes I couldn't help but think how boring it was. I did not care for the characters and did not get a warm fuzzy from the storylines. While there was an attempt to produce mystery and drama around the patient's odd mental health issues, they tended to unfold with little intrigue and sometimes they were too transparent. In the end, Mental is a sub-par television series. Skip it.