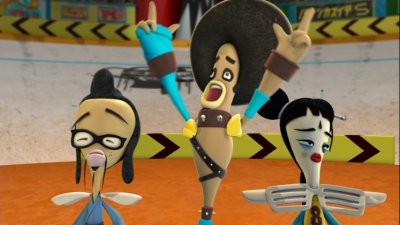 The First Season, Volume One

I am not an avid watcher of animation -- film, television, or otherwise. However, I recently saw Kung Fu Panda and loved it! I wanted something similar (a comical, martial arts themed animation) and thought I would try Chop Socky Chooks. While I knew it would not be the exact same, I was still hoping the experience would be a lot of fun. I found Chop Socky Chooks to have its moments, but as a whole I was not really impressed with it. The show has a fun, goofy approach with a mix of light-hearted plotlines and kung fu action. It makes for a decent watch, but nothing about it makes it must watch TV.

Chop Socky Chooks is a computer-generated imagery action/comedy series about a team of kung fu chickens who battle the villains of Wasabi World. The good guys are Chuckie Chan, a kung fu master tasked with protecting the weak, KO Joe, a wannabe ladies man with an afro (he also has an afro comb that he uses as a grappling hook), and Chick P, a no nonsense gal who can pack a punch. In a typical episode, something happens in Wasabi World and it rubs the kung fu chickens the wrong way. The sinister event may be something as insignificant as banning skateboarding in the courtyard or something bigger like flooding the city. In most cases, the villain is Dr. Wasabi, who is a fish with a bad German accent and the owner of Wasabi world. Wasabi's minions are Bubba, a big dumb gorilla, and nameless ninja chimps, who always get their butts kicked by the chickens. Throughout the course of volume one, there are a few other villains who make guest appearances.

For the most part, the stories are simplistic. There is not much depth to them or the series. The same type jokes appear in every episode. For instance, the main hero Chuckie Chan frequently misuses slang and phrases, which his cohorts always correct him. His language mix ups are a silly in the context, but the joke gets old fast. With that said, if you like one episode, then the next will be great. Unfortunately, the format as-is did not do it for me. I was disappointed with the constant repetition and light-hearted stories. While I was not expecting the world from the show, I still wanted a little more depth to it and its characters.

While the show generally did not work for me, there were a random episodes that I enjoyed more so than the others. For example, episodes "Kobura Strikes" and "Snake in the Class" were decent. The main villain was Chuckie's rival Kobura -- a snake who was kicked out by their kung fu master for having evil tendencies. He comes to Wasabi World to enact his revenge on Chuckie. As a villain, Kobura was a better character. He actually fit the bad guy stereo type and was not as silly as the hard-to-take-seriously Wasabi.

Overall, I did not think very much of Chop Socky Chooks: Volume One. It was light-hearted and repetitive from episode to episode. While I did not really like the show, I did not think it was absolutely terrible. The experience of watching the show's first thirteen episodes was not painful. However, it is not something I would recommend to anyone. I think the show has merit if you are in their target audience. 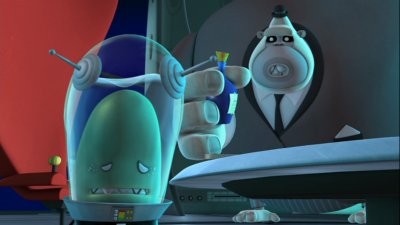 1. Game Over Chooks!: The Chooks find themselves in a deadly virtual battle.
2. Big Bad Bubba: Bubba becomes possessed by an ancient demon.
3. Kobura Strikes: An enemy from Chuckie's past returns for revenge.
4. Now You Coliseum, Now You Don't: The Chooks find themselves in a gladiator-style showdown.
5. Double Trouble: Robot look-alikes of the Chooks go on a crime spree.
6. If Looks Could Kill: Chick P reunites with an old friend only to discover a family secret.
7. Do You Want Thighs With That?: The new burger sauce has become addictive, so has the new liposuction clinic.
8. In Your Dreams: Chuckie Chan becomes a prisoner of Wasabi's dream world.
9. Speak Now Or Forever Hold Your Breath: Wedding bells ring for Wasabi much to the dismay of the chooks.
10. Snake In The Class: The Chooks' secret identities are revealed.
11. His Master's Choice: Wasabi's new must-have toy is not all it's cracked up to be.
12. Chop Socky Whoops: The secret origin of the Chooks is revealed.
13. The Level That Time Forgot: The Chooks get stranded on a long-forgotten level of Wasabi World.


Video:
The video in this release is given in an anamorphic 1.78:1 ratio widescreen color format. The picture quality is quite good. It suffers from a slight grain, but detail remains to be sharp and clear. Overall, the picture is relatively clean and should look good on big screen televisions.

Audio:
The audio track is given in English 2 channel Dolby Digital surround. The dialogue is easy to here throughout the feature. The sound effects and music come off clean and crisp. There are also no noticeable distortions in the track. There are operational subtitles in English, Spanish, and French.

Final Thoughts:
Chop Socky Chooks: Volume One was new to me with this review. I had an idea about what to expect and it met those expectations to a certain degree. I was looking for a comical, kung-fu animation and Chop Socky Chooks did fit the bill. Unfortunately, I found the show to be pretty generic from episode to episode. The storylines were weak and too light-hearted. There was not much depth to the characters. The jokes came off as repetitive. All in all, the show did not grow on me. I do not think it is awful, but not worth recommending either. For these reasons, I give the DVD set a skip it recommendation. However, if you like these types of animated shows, then it might be worth renting to see if it is right for you.