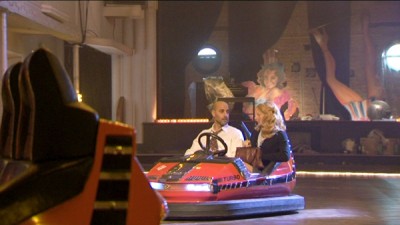 Stanley Tucci's English-language
remake of Theo van Gogh's 1996 film of the same name is an intense,
demanding two-hander whose deep humanity vastly outweighs the experimental
nature of the film's story and structure. Tucci and Patricia
Clarkson invest a great deal in their complicated roles; there are no
other significant speaking parts in the movie (except for sparse off-screen
narration) and therefore these two actors take enormous risks without
the safety net of other performers or action to distract viewers from
potential weak spots. But in Blind Date, there are no weak
spots in the committed lead performances.

Don and Janna are a middle-aged
married couple who have experienced a tragic rift in their relationship.
They embark on a series of "blind dates," in which they act out
a variety of seemingly distinct characters. They do this in an
attempt to access and exorcise the underlying strain on their marriage.
Usually, the playacting leads to some painful detail or other emerging
from their real lives - and Don and Janna's inability to face that
detail leaves the date crumbling into anger or frustration. This,
then, is one place where the film's complexity lies: the characters
find that they are not equipped to deliver on the very challenge that
they set out to achieve.

This premise sounds relatively
simple, but the layers of emotional significance that the two leads
dredge up around seemingly straightforward dialogue makes Blind Date
a film of rare depth. Careful timing and subtle reactions from
both Tucci and Clarkson suggest densely-packed experiential strata beneath
the surface of the "roles" they take on during their dates.
And that is also what makes these performances so special - both actors
are playing people pretending to be different personalities, with notes
of their real characters emerging only occasionally and "accidentally."
That they can convey the emotional struggle of characters who are doing
their damnedest to mask their agony is a real achievement.

Tucci says in the commentary
track that he shot the film using van Gogh's own style: three digital
cameras shooting simultaneously, so that masters and coverage are all
part of the same take. This gives the film a play-like feel, and
helps retain the power and immediacy of the performances. The
whole thing was shot on two sets, and the golden light and soft colors
provide an elegant but intimate feeling. The camera moves fluidly,
providing just enough of a cinematic touch so that we are never distracted
or bored by the general lack of action.

The minimalistic aspects of
the film's production help retain a focus on the characters and their
sometimes puzzling - but never arbitrary - behavior. The script,
by Tucci and David Schechter, doesn't reveal the full extent of the
gulf between the couple - some of the specific whys and hows of the
situation are left ambiguous. But we know enough - that the
relationship is insurmountably strained despite the best intentions
of both participants. In the end, Blind Date is an even
rawer experience that it is at the beginning, and instead of easy closure,
the film's conclusion gives us something much more valuable: a reason
to think deeply about some extremely difficult and elusive subjects.

The enhanced 1.78:1 transfer is good, but not perfect. Part
of this is no doubt due to the fact that it was shot digitally, and
most in low light. Therefore there's a fair amount of broken-up
digital noise visible in many scenes. Having said that, the colors
come across well and the blacks are deep. I'm fairly certain
the flaws exist at the source, and may not a result of the transfer
itself.

Both 5.1 surround and 2.0 stereo tracks are available, and they
are both quite good. Although the surrounds are not terribly active,
they do provide just a bit of very convincing ambiance. The well-selected
music and spare original score by Evan Lurie come across exceedingly
well. Naturally, dialogue is at the forefront of both mixes and
it is crystal clear.


The sole bonus feature is a very welcome commentary track by Tucci
and Clarkson, which is informative and conversational. There's
some very interesting stuff about the project's genesis and production.
Tucci dominates the track, but in a genial way; Clarkson seems mildly
uncomfortable with the format.

Blind Date is a small, challenging gem of a movie, lovingly crafted
by its crew and gifted leads. An odd premise is made plausible
by the exemplary performances, which are ripe for close study by budding
actors. Highly recommended.