Universal // R // November 17, 2009
List Price: $29.98 [Buy now and save at Amazon]
Review by Chris Neilson | posted November 23, 2009 | E-mail the Author
If you're going to see only one nineteenth-century French murder-romance novel reimagined as a Korean vampire flick this year, Thirst (Bak-jwi) is the one to see. A 2009 Jury Prize winner at Cannes, Thirst is the most recent film from writer-director Chan-Wook Park, who is best known for his Revenge Trilogy -- Sympathy for Mr. Vengeance (2002), Oldboy (2003), and Lady Vengeance (2005). Though based on the 1867 serialized novel Thérèse Raquin by Émile Zola, Thirst is more than a modern retelling of Zola's tale of sex and murder; with the introduction of vampirism and Catholicism, it's essentially a genre-defying, convoluted morality play.

Sang-hyeon, played by Song Kang-ho (Memories of Murder), is a Catholic priest posted to a hospital where he ministers to the ill and dying. Though universally beloved by the patients and their families for his compassion and devotion, Sang-hyeon feels called to do even more. When he volunteers as a test subject for an ultra-risky medical experiment to find a cure for an Ebola-like blood disease, Sang-hyeon is accidentally infected with vampirism. Seemingly returned from the dead, he finds direct sunlight intolerable, craves human blood, is overwhelmed with carnal desires, and imbued with superhuman strength and powers of regeneration.

The confused Sang-hyeon begins covertly helping himself to the blood of coma victims at the hospital a pint at a time, but his world really turns upside down when he visits his childhood friend Kang-woo (Shin Ha-kyun). Kang-woo is a slow and sickly man who lives with his domineering mother (Kim Hae-sook) and his beautiful young wife Tae-ju (Kim Ok-vin), an orphan taken in by Kang-woo's mother as a girl and later married off to him. 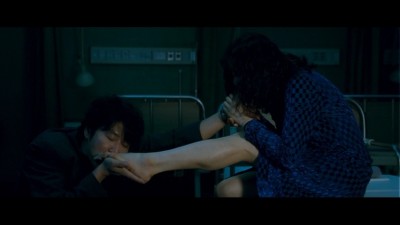 Despite Sang-hyeon's best efforts to keep his desires in check, he and Tae-ju begin a torrid affair. Eventually, Tae-ju manipulates Sang-hyeon into helping her kill her husband, and convinces him to make her a vampire too. Before long, Sang-hyeon is living with Tae-ju and her now paralyzed mother-in-law and the materialized ghost/guilt of their crime, the drowned Kang-woo. 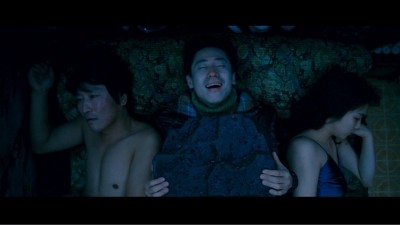 Tensions arise between Sang-hyeon and Tae-ju as he tries to limit his blood cravings while she revels in the hunt. There's much (arguably too much) blood and gore, and then the story finally moves towards its redemptive conclusion. 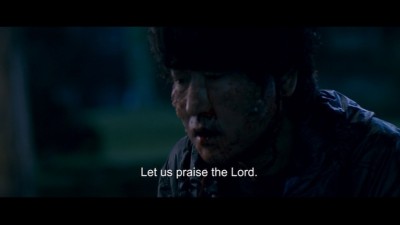 Presentation
Video & Audio:
Thirst is presented in anamorphic widescreen (2.35:1). Colors are vivid, but inconsistent. Detail varies but overall is acceptable, though contrast is very poor throughout.

Extras:
Other than some letterboxed Focus Features trailers that play automatically at startup, no extras are provided on this release, not even the theatrical trailer.

Final Thoughts:
At one-hundred-and-thirty-four minutes, Thirst is at least a half hour too long, but it's a psychologically engaging, visually innovative, and cliché-free vampire romp. Alas, this bare-bones, visually middling, release from Focus Features will be a disappointment to Chan-Wook Park's ardent fans who will have to decide whether to settle for this, or wait for a Korean-release special edition. 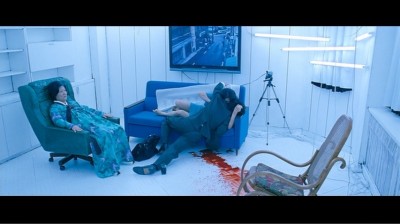