On the Road with Charles Kuralt - Set 1

Acorn Media // Unrated // October 27, 2009
List Price: $39.99 [Buy now and save at Amazon]
Review by Stuart Galbraith IV | posted October 20, 2009 | E-mail the Author
In the vast sea of soft news mediocrity once was a man with the observant eye of a Mark Twain reporting on everyday people in the style of John Steinbeck (specifically, Travels with Charley). Charles Kuralt (1934-1997) kicked around the CBS network's news division for years - for a time he was their Chief Latin American Correspondent - but his interests lay elsewhere. In 1967 he began doing segments initially airing on The CBS Evening News with Walter Cronkite, and which continued in some form until his retirement in 1994. At a time when most reporters were covering race riots, Vietnam, and general domestic and foreign upheavel, Kuralt took to the serenely peaceful back roads of America (in a spacious white motor home that became his trademark), reporting about "people you don't read about on the front pages," Kuralt would say, "They've never been on the front pages."

More than six hours of On the Road segments, as an 18-segment "Best-of" type show that originally aired on the Travel Channel, have been compiled as On the Road with Charles Kuralt - Set 1, a still-enchanting, utterly disarming collection of mesmerizing Americana. Those who remember Kuralt's segments with the same fondness as this reviewer will want to snap this up, while those unaware of Kuralt's significance but who enjoy, for instance, Ken Burns's terrific American history documentaries, really should sample these. It's one of the great unsung TV releases of 2009. 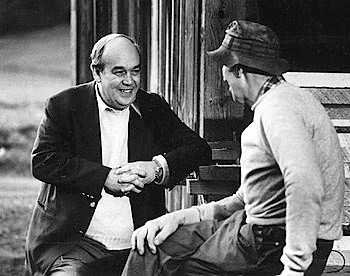 Each episode contains three to five segments of varying length; most seem to date from the 1970s and early-1980s. Many of the segments are merely amusing and not far removed from the kind of evening news fodder network and local news shows like to stick at the end of a typical news broadcast: Kuralt meets a man who builds incredible recreations of famous buildings (the U.S. Capitol, etc.) and ordinary objects entirely out of toothpicks and glue; in another he meets a man ekking out a living blowing soap bubbles at science museums.

But where On the Road really works its magic are those humanist stories with an Ikiru-like profundity, stories of perhaps lonely and dissatisfied people finding meaning through transforming acts of kindness. Here you'll find Kuralt visiting an old African-American man who, having been denied a bicycle when he was boy because his family was too poor to afford one, has made it his mission late in life to provide free bikes to every child in his small town, bicycles he lends and maintains at no charge, out of his own meager retirement money.

Along similar lines, you'll meet the woman with a similar view toward books: for decades she's maintained a free private library, one originally created for the loggers working nearby but open to anyone in need of book, at a library unlocked and open to all on the honor system 24 hours a day.

In another great segment, Kuralt meets an 80-year-old woman who spends the entire day, from five o'clock in the morning until ten at night preparing and serving free meals in her own home to anyone in need or want of a home-cooked meal. (A lot of people show up.) Equally memorable is the old man, a former gardener, who transformed an ordinary highway stop into a beautiful "Roadside Shangri-La," who confesses to Kuralt that, once he's gone, the forest will likely reclaim his carefully maintained garden. The surprising postscript to this story is one of the loveliest I've ever seen on television in any form.

There's a lot of good humor, too. There's the barber who moonlights as a bullfighter, living out a childhood dream, or the nation's top shoe salesman, who will do anything to sell you a pair of shoes.

Many of the segments capture a rural way of life on the cusp of extinction at the time they were filmed; some still survive, others do not. Kuralt explores fading advertisements, painted perhaps half a century before, on the sides of brick buildings, ads for products and businesses long gone. A report on Cajun "Life on the Bayou" features an unassuming nightclub still in business in 2009, famous for its marathon jam sessions of traditional Cajun music, but what about the decaying Cajun ghost town nearby that Kuralt visits late in the segment? The Thurberesque thumb-twiddling invention, Twidd, a bit of whimsy that didn't seem to go over too well even when Kuralt paid its inventor his visit, is no longer being produced, and the builders of the Golden Gate Bridge Kuralt interviews most all be deceased by now. But Blenheim Ginger Ale, whose bite made Kuralt's eyes water, is still being made.

The 18 On the Road compilation shows are presented on three single-sided DVDs in their original full-frame format. The segments seem to have been filmed on both 16mm film and early videotape, with everything preserved on tape. Given their origins as evening news segments, they look okay, while the mono audio, with optional SDH subtitles, is adequate.

Supplements include a very welcome but frustratingly incomplete 'Road' Updates, bringing the viewer up to date on the people and places featured in about one-fifth of the segments. A bit more digging to include each segment would have made this an invaluable extra. Also included is a detailed text biography of Kuralt that omits the newsman's secret "shadow" family, a story learned only after Kuralt's death.

This is a real treasure trove of material, the kind of thing the DVD format is especially good at, one you'll want to savor over many weeks. On the Road is a not what you might expect to turn up on DVD, but boy howdy I'm glad that it did. A DVD Talk Collector Series title.