Super Friends: Season One, Vol. One 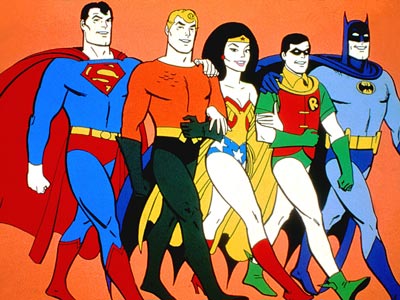 The 1970s were soaked in the
blood of Vietnam and Cambodia, and were reported via Hunter S. Thompson's
fear and loathing. Cultural rivalries and civic strife bloomed
from our urban centers like fungus from a damp forest floor. Our
politics became corrupt, and we knew it. It was a time of war,
terror, and general disharmony. It was also an era of unrivaled
cinematic excellence, particularly in the United States. From
Dirty Harry in 1971 to The Deer Hunter in 1979 and many in
between, the decade's films plumbed the psychic depths of what made
the 1970s so unrelievedly awful - a decade of dread, distrust, and
death. The people responsible for producing children's programming
must have felt challenged: how to create something constructive, entertaining,
and edifying for kids amid all the horror? This may account for
the fact that the 1970s produced some of the worst cartoons known to
mankind.

Super Friends, the first
incarnation of Hanna-Barbera's long-running but ever-changing series,
is one example of the kind of mind-numbing animated havoc that almost
wrecked a generation of children. The gulf between this program
and Bruce Timm's wonderful Justice League
is a deep, black, immeasurable chasm. Super Friends ran
one season in 1973-1974 - in other words, concurrently with Nixon's
final days. (A more harmonious confluence of televised media nonsense
could not have been imagined in Marshall McLuhan's wildest dreams.)
We begin with our heroes, a quintet of DC Comics favorites: Batman and
Robin, Wonder Woman, Superman, and Aquaman. These five are joined
by hip youngsters Marvin and Wendy, who have their own special powers
and are always saying things like "Right on!" and "Groovy!"
Also along for the ride is Wonder Dog, a transparent rip-off of the
most annoying cartoon dog ever drawn: Hanna-Barbera's own Scooby-Doo.
Just like Scooby, he growls and "ruffs" moronically, mugging nonstop and rolling
his big googly eyes.

Marvin and Wendy are not just
silly in and of themselves - earnest pun-tossers whose eager voices
belie any semblance of respect for children - but their silliness undermines
and neuters the authority roles of the superheroes. I'm not
suggesting that superhero material should strictly be played with a
straight face, but surrounding them with goofy kids and a dog who bark-talks
forces the characters into situations and dialogue that just aren't
fitting.

This two-disc DVD set contains
the first half of Super Friends's only season (the show was
later reincarnated under a variety of titles through 1986). Episodes were, surprisingly, rendered in a sprawling hour-long format. This
means eight episodes that run about 45 minutes each, sans commercials. Plots are discursive in a way that suggests rambling writers' meetings
strewn with unmentionable paraphernalia. The meandering, overlong stories
follow the same deadly predictable formula as those on Scooby-Doo - witless "mysteries"
in which transparently ridiculous clues pile up, evil doppelgangers
stalk the heroes, and the villain turns out to be a familiar
face behind a mask. The show displays no significant knowledge
of the heroes' canonical background, nor any sense of the
adventurous that made them so memorable and iconic. The
jokes cater mostly to those with a demonstrable contempt of all things
comic. The animation can reasonably be assumed to have been executed
by a group of jailed children armed only with markers and a broken zoetrope.

In no way is Super Friends
worth viewing. Its only value is in making every other attempt
at animated entertainment look good. As a nostalgia trip, it's
depressing. As comic book-inspired filler, it's a freaked-out
let-down. As a choice for the kids, it will only make them dumber.

The full-screen transfers are a disappointment. These episodes
are presented without any noticeable restoration. The transfers
reveal plentiful print damage that includes nicks, hairs, and scratches.
Colors have faded slightly.

The mono soundtrack is merely serviceable. It's clear enough,
but without any dynamic range at all.

The first disc contains something called Super Friends Trivia
Challenge that I was not man enough to take.


In the midst of the boiling cultural stew of the 1970s, Super Friends
was like rancid ham hock. It's hard to take the notion of millions
of children's brains being fried by this and other Hanna-Barbera-produced
pap. It's hard to believe this is out on DVD now, while The
African Queen and The Magnificent Ambersons are not.
Skip it!