Other // Unrated // October 20, 2009 // Region 0
List Price: $24.95 [Buy now and save at Amazon]
Review by Stuart Galbraith IV | posted February 18, 2010 | E-mail the Author
Though ultimately disappointing, Synergy Entertainment's Sherlock Holmes - The Archive Collection gets an "A" for ambition and for its ingenuity. The concept is a good one: a catchall of miscellaneous and comparatively rare theatrical shorts, one feature, and television appearances all related in one way or another to Sir Arthur Conan Doyle's iconic consulting detective, Sherlock Holmes.

Included are two-reel comedies, a once-lost early talkie, a cartoon, an unsold television pilot and much more. The video/audio is not great on any of this material, but most of it is at least acceptable, watchable certainly. As a Sherlock Holmes fan and someone often intrigued by outré productions like the 1930 Holmes spoof Limejuice Mystery (featuring Herlock Sholmes and Asian femme fatale Anna Went Wrong) I was pretty excited to receive this. But the movies and television shows themselves are oddities and curios at best and the majority are pretty dreadful and/or quite boring. Even hardcore Boris Karloff fans and Baker Street Irregulars would be hard-pressed to sit through "The Sting of Death," a dreary comic-mystery about killer bees whose 50-minute running time feels more like three days. 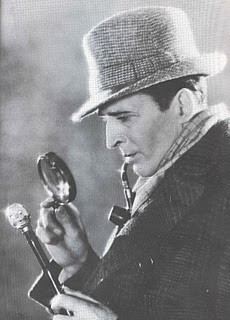 The collection is divided onto three DVDs. Headlining Disc 1 is Sherlock Holmes' Fatal Hour (1932), a British film originally released there as The Sleeping Cardinal, though a U.S. release print has been sourced for this release. It was the first of five films to star Arthur Wontner as Holmes; the other films are The Missing Rembrandt (now considered lost), The Sign of Four (both 1932), The Triumph of Sherlock Holmes (1935), and Silver Blaze (1937), the latter commonly known as Murder at the Baskervilles. Most of these have fallen into the public domain and are widely available, but the quality of the transfers have been consistently mediocre-to-poor.

The print sourced for Sherlock Holmes' Fatal Hour is somewhat better than those versions, though still far from good. This early talkie used a sound-on-film process that took up a lot of room, reducing the aspect ratio to a thin 1.20:1, meaning that current prints tend to crop actors off at the forehead, though most of the film is unimaginatively shot in static medium shots, so this isn't too much of an issue.

On the plus side, Wontner is the spitting image of Sidney Paget's illustrations for The Strand magazine, which accompanied the first print versions of many of Conan Doyle's stories. However, Wontner's Holmes is very much of an older British stage tradition and otherwise not very distinctive. His Holmes is more a patriarchal figure rather than the aloof genius he's usually portrayed as. It's easy to imagine Wontner's Holmes blithely smoking his pipe and reading his London Times is a room full of grandchildren. Ian Fleming - not the creator of James Bond but rather a prolific character actor, and definitely not "Jan Fleming" as Wikipedia insists - is on the other hand an excellent Watson, with all of that character's endearing qualities in place.

As a movie, Sherlock Holmes' Fatal Hour, like many early talkies, is extremely static with no visual momentum, no suspense, almost no exteriors to break up the monotony. It plays like a stage play and, visually, is closer to the cheap Monogram Charlie Chans of the 1940s than the Basil Rathbone Holmes series. Like the Rathbone films this borrows practically nothing from its credited sources, The Empty House and The Final Problem, though the actor playing arch-nemesis Professor Moriarty (I won't say who as it's supposed to be a surprise) is quite good.

Two early talkie shorts accompany the feature. Lost in Limehouse - or Lady Esmerelda's Predicament (1930) is a parody of Victorian melodramas and features members of Hollywood's Masquers Club. Dour Scot Olaf Hytten is Sheerluck Jones in this; Hytten was later part of the stock company of actors populating Universal's Sherlock Holmes series of the 1940s, with Olaf usually playing butlers, innkeepers and the like. It's okay but not exactly side-splitting. The Limejuice Mystery - or Who Spat in Grandfather's Porridge? (1930) is as much a spoof of the then-popular fad for Fu Manchu and Charlie Chan mystery-thrillers as it is of the Holmes canon. Performed by marionettes, it's fairly wild and, typical of the period, crammed with outrageous racial stereotypes.

Disc 2's star attraction is The Sting of Death (1955), a dreadful live television comic mystery adapted from H.F. Heard's novel A Taste of Honey, the same source for the even worse British horror film The Deadly Bees (1967). Milquetoast Mr. Silchester (Robert Flemyng) buys honey from Mr. Hargrove (Martyn Green), who's secretly raising killer bees to do his evil bidding. Boris Karloff appears as a retired beekeeper/scientist living nearby; that's what Sherlock Holmes did after he retired but Karloff calls himself Mycroft, the name of Sherlock Holmes' Smarter Brother, though it's not really clear who the heck Karloff is actually supposed to be. Badly kinescoped, the show features hammy performances by all, especially Karloff, who wears an ill-fitting wig that makes him look like President Andrew Jackson. Hermione Gingold struggles with a Cockney accent as Flemyng's landlady.

Disc Two also includes The Man Who Disappeared (1951), a loose adaptation of The Man with the Twisted Lip intended as the pilot for an unsold Holmes series. John Longden (a regular in Alfred Hitchcock's early British films) is the great detective in this cheap but not-bad production. A Case of Hypnosis (1952) is a Lancelot Link-type all-chimpanzee short featuring Holmesian duo Professor Lightskull and Doc Twiddle. I agree with the narrator's assessment: "This is unbearable! Oh, brother!" The Strange Case of Hennessy (1933) is yet another genre parody-musical short with Cliff "Ukulele Ike" Edwards (Pinocchio) and directed by Ray(mond) McCarey.

Disc 3 includes more oddities. The Adventure of the Speckled Band (1949) is a pretty good early television production (Masterworks of Famous Authors/Your Show Time) filmed on sets left over from Joan of Arc (and which would later turn up in The Man from Planet X, 1951). Alan Napier, Alfred the Butler from the later Batman TV series and touting a colossal pipe, plays Holmes while Melville Cooper is Watson; gorgeous Evelyn Ankers, another Universal/Holmes veteran, is Helen Stoner. The Copper Beeches (1912) - "produced under the personal supervision of the author, Arthur Conan Doyle" - is a fairly crude early silent, but a fascinating artifact in surprisingly good shape and accompanied by a full orchestral score. French star Georges Treville is Holmes in this one. Stoll Picture Productions made The Adventures of Sherlock Holmes - The Man with the Twisted Lip (1921), with Ellie Norwood as Holmes and Hubert Willis as Dr. Watson, and once again the image and accompanying score are better than you'd expect. The Case of the Screaming Bishop (1944) is a Phantasy Cartoon from Columbia's Screen Gems division offers Hairlock Combs and Dr. Gotsum in this good black and white spoof of the Rathbone-Nigel Bruce series.

Except for The Sting of Death, a kinescope weirdly distorted and raggedy, the other films look fairly good considering their rarity, from slightly mediocre yet watchable to unexpectedly good. Synergy's watermark occasionally but for the most part unobtrusively appears. The audio is adequate; there are no subtitle or alternate audio options.

The General's Boots (1954), an episode of The Schlitz Playhouse of Stars, features Basil Rathbone not as Sherlock Holmes but as a vain, contemporary British army general. (He did in fact play Holmes once more after ending Universal's film series in 1946, in a 1953 episode of the series Suspense. Unfortunately, that particular program remains lost.) Former Watson Melville Cooper, Robin Hughes, and John Dehner co-star.

Needless to say, this is the kind of release geared for highly specialized tastes, Sherlock Holmes fans and those curious about the kind of oddball productions this collection embraces. Though somewhat disappointing and dominated by mediocre material, the rare and intriguing nature of the films and TV episodes make this Recommended.