Microcinema // Unrated // July 28, 2009
List Price: $39.99 [Buy now and save at Amazon]
Review by J. Doyle Wallis | posted October 29, 2009 | E-mail the Author
I first became aware of Mike Kelly via his stuffed animal sculptures, famously used as the cover image for Sonic Youth's "Dirty" album. Those stuffed animal sculptures are also a good example of the divide between artists intention and critical/audience perception. Kelly never intended the natty, soiled, knit forms to be seen as representing childhood trauma or loss of innocence but that is how they were perceived. It opened him up explore works based on repressed memory and how art is often looked at as being born of tragedy.

I first saw glimpses of Day is Done on the PBS series Art in the Twenty-first Century. The work is a multimedia installation project that Kelly developed, basically transforming a large art space with sculptures, art, music, and video, an overall experience. Its a multitasking bit that is increasingly common in galleries these days. After all, were in an age when a phone is considered useless tool if it only makes and receives calls. Likewise, painters aren't just held to the brush and canvas. Artists are as free as ever to dabble as they see fit in many mediums.

The basic conceit began with Kelly searching through old high school yearbooks and doing reproductions of photos from the books extracurricular activity sections. These old photos would be recreated through Kelly's eye with actors, costuming, and props. Kelly would then write out a scenario for the photo, stage and film the scene, and assemble it all in a gallery which would make an all encompassing work, a melange of the photos, filmed segments, musical accompaniment, and props. 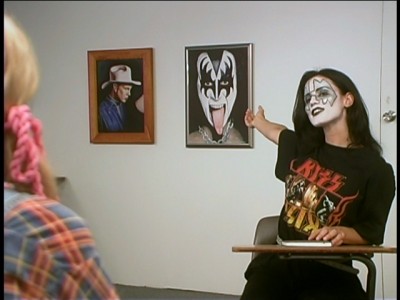 What really caught Kelly's eye in those yearbooks were the vampires, devils, goths, and rednecks, combining such images with scenes revolving around group rituals, be it stage shows like pageant plays or modern dance, to singles meetings, donkey basketball, etc. Thus, we get a hammy Satan doing a dirty stand-up act. A duel candle lighting ceremony in a gymnasium, one with a fat Catholic girl the other a skinny Jewish girl, is interrupted by a we-like-fat-chicks rap-metal act by two Nazi thugs. A hick-dressed girl with "FRESNO" bedazzled on her overalls standing in front of a shack performs a Beyonce-ish number with the suggestive chorus tag, "Do you wanna' hayride?" A ghost vampire goes Andrew Loyd Weber as he sings about a chair and the people he longs to touch who sit in it, "Blood is all I want. Sweat is all I get." A trio of female mimes does a chugga' chugga' train dance through the school hallways.

While there are some ponderous bits (the main source being a "woods group" of druid, vamp, ghoul, and hippie opining about nature) and I wouldn't call it overall comic, Day is Done is clearly, darkly playful, almost like Tim and Eric: Great Job! doing some twisted art version of a Degrassi Jr High. Kelly is looking at seemingly innocuous social conventions and revealing the twisted perverse miasma underneath- and, yes, with some juvenile turd jokes along the way. The standout sequences for me were: the picking a Mary competition where two virginal finalists undergo superficial and mean-spirited constructive criticism of their dress and demeanor, a laugh-tracked singles meeting with some witches, a Kiss fan, a redneck girl, and some black girls that begins with them insulting their crushes (Gene Simmons, Brandon "as the Crow" Lee, R Kelly, Kobe, and Garth brooks), gets kinda' Zen, before devolving into a catfight, and, straying from the school setting, an angelic boy going to the barber shop and having some hormonal horrors, like looking through the haircut catalog and encountering graphic close up pictures of female genitalia.

Now, in terms of this working as a film rather than the installation piece, Day is Done is quite long, 169 minutes total. There is no narrative, though the Virgin Mary character serves as a semi-throughline in the last third. Most of the reconstructions and scenes are edited, spread out, cut between two or three sequences. I had the feeling that some needed to be seen as a whole while others played far too long even though they were split up. There were two sequences that, while nice to look at, didn't seem to fit at all with the rest of the work: a five minute psychedelic commercial song routine with images of candy canes and Pepto and a nude silhouetted dancer behind a curtain. Wandering around an art space, I can see how the twisted miscegenation would work better, but as a home viewing experience the impression I was left with was that it was all just a cluster, fine in touches, hard to endure as a whole. And, after all, in the art space you can move on if you don't like a piece, whereas with this film you have to reach for the remote or endure that a segment you like is interrupted by one you aren't so keen on. 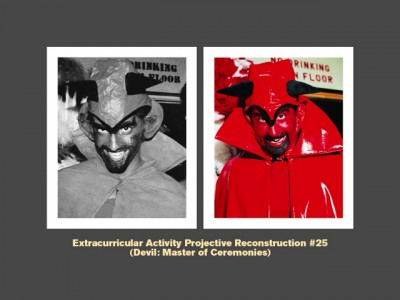 Day is Done is presented in standard fullscreen. Its video. Often soft, macro blocky, plain and simple, video. To give you an idea of the technical quality, I doubt there is a visual or editing effect used that wasn't post-1983. Of course, this aesthetic is very fitting as one imagines its the kind of thing a kid could whip up in his 80's high school AV class. Maybe a tad better but not much. The source is what it is and Microcinema does an okay job with the transfer.

A sole 2.0 stereo track is fine. At the risk of repeating myself, like the video, the limited audio compliments the piece. The music is really standout. Kelly composed all of the the tunes which really run the gamut. While clearly all synth scored, tracks range from 80's new wave, to abstract noise, barbershop quartet, gospel, sappy ballad, choral dirges, and rap, just to name a few.

Day is Done is spread across two discs, the main works lasting an hour and forty-two minutes on disc one and one hour and seven minutes on disc two. Disc one has production stills and a gallery of the original and reproduced photos. Disc two contains bonus video material, five scenes, including extra, extended, and rehearsal footage totaling eighteen minutes.

Day is Done is a fairly idiosyncratic piece aimed at a very specific audience. No one is going to casually decide to buy this two disc, forty dollar set. This is a release for those that are familiar with Kelly and interested in his work. Of course, I would venture to guess some that like his painting and sculptures might not even jibe to this film piece. Artistic taste buds are a sensitive thing. So, I'll say for most people I'd recommend research, find some clips online, give it a rent, and don't go for a blind purchase.