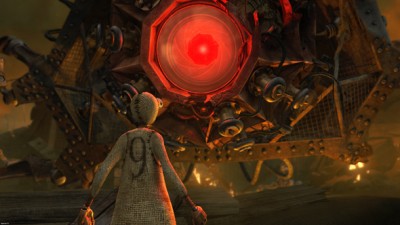 Shane Acker's 2005 animated
short film 9 is visually stunning, engaging, memorable, ambiguous,
and suspenseful. Acker's 2009 feature version of 9 is
narratively derivative, boring, bloated, and unambiguously expository.
I point out these contrasts not because Acker is incapable of handling
a feature length film - on the contrary, I look forward to his next
work - but because 9 represents the small-mindedness of studios
and their tendency toward boxed-in and self-defeating thought processes.
A short film is a short film, which is a special art form. It
has a purpose and a particular approach that make it different.
How often does Random House or Simon & Schuster contact an author
whose story has just appeared in the latest Glimmer Train and
ask them to expand it into a novel? Never. So why do film
execs believe that short films are cinematic Sea-Monkeys that just need
a little studio cash to grow into features? The short version
of 9 is pretty awesome; the feature is limp.

9 is the last in a series
of mechanical creatures left behind by a scientist whose revolutionary
robot "brain" was co-opted by a fascistic government and ultimately
contributed to the destruction of mankind. The creatures have
banded together to reconstruct what happened to their human predecessors.
Riven by a disagreement as to how to solve the mysteries before them,
the group is ultimately able to work together, making the world a more
hospitable place and overcoming humanity's failures.

Acker's mastery of design
assures that 9 is visually involving from beginning to end.
The characters have an appealingly tactile look - they appear to be
constructed of burlap fabric, zippers, and mechanical lenses for eyes.
They are immediately endearing and likable. The backgrounds are
executed beautifully, rich with detail. We move swiftly and surely
through this world, seeing it through Acker's confident eye - he
knows what he wants us to see and this results in a fully-imagined landscape.

The plot of the short version
of 9 was punchy, strange, and focused. The plot of the
feature is sticky with needless detail, expository dialogue, and second-hand
ideas. It uncomfortably mixes in elements from The Secret of
NIMH and The Matrix that are poorly integrated into the master
story. The feature feels rehashed from bits and pieces, whereas
the short felt unique. The reliance on dialogue is understandable;
studios don't make silent films anymore. But this was part of
the short version's charm - as a viewer, it's fun to be challenged
to do mental work in figuring out a film's puzzles. In the feature
version of 9, there are no puzzles. Everything is explained
for us, and rather tediously and unconvincingly so. This aspect
of the film's execution reeks of studio meddling.

Unwise use of dialogue or not,
the voice actors do an admirable job with the lines they are given to
read. Elijah Wood as 9 conveys the terror and wonder of being
"born" fully-formed into a crumbling and chaotic world. Veterans
Christopher Plummer and Martin Landau lend finely-modulated performances
as 9's stern elder and mentor, respectively. Even Crispin Glover
shows up (hooray!) for an appropriately mannered turn as the loony genius
of the small group.

9 is an entertaining
failure that is the product of two disparate ingredients: short-sighted
studio maneuvering, and the hard work of many dedicated and talented
filmmakers. The end result contains admirable visuals and voice
work, but it is, ultimately, a stale hash bogged down by a screenplay
that was, both narratively and thematically, overly finite.


The enhanced 1.78:1 transfer is lovely to look at. Acker's
meticulous design is served well here. A dark color palette is
perked up by flashes of neon green and deep electric reds. The
excellent transfer is deeply detailed and doesn't break up when challenged
by solid blacks. The visuals are 9's chief selling point,
and the DVD handles them effortlessly.

The Audio
The Dolby Digital 5.1 soundtrack
recreates a lovingly-mixed sound design that is awash with attention
to every little whoosh and scrape in 9's devastated landscape.
The actions of the pint-sized characters are often accompanied by a
cavernous hollowness amid their oversized human-scale environment.
The action and chase sequences burst with active surrounds and the occasional
well-placed boom of a basso profundo explosion.

The Extras
A handful of decent bonuses
are included that will no doubt pique the interest of the film's fans.
First up is a full-length commentary track by Acker, animation
director Joe Ksander, head of story Ryan O'Loughlin and editor Nick
Kenway. The group comes off as likeable and dissects the film
congenially, delving into the production in detail. Next up is
a group of Deleted Scenes (7:24), all in animatic form.
These would have bogged down the film and were excised prior to being
fully animated. The featurette 9
- The Long and Short of It (16:28) describes the film's journey
from short subject to theatrical feature. The Look of 9

(13:14) gets into the nature of 9's universe and how the design evolved.
Acting Out (4:54) looks at the voice actors' performances.
9 - The Original Short (10:34) is accompanied by an optional commentary
track with Acker and Ksander.

9 was an impressive short film that has been transmogrified into
a visually impressive but otherwise lackluster middle-of-the-road animated
feature. Studios seem to view short films as nascent features,
when in fact they should be purchased and distributed theatrically alongside
features, as they were in the early days of the cinema. This would
help preserve and promote a very specific art form, one that Acker excels
at. Rent it.