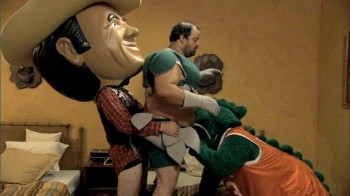 The Movie
It's a tough challenge to make me laugh. The comedy section of my DVD collection is tiny, and my friends get frustrated when I don't succumb to their numerous attempts at breaking my stone-faced demeanor. But I'll tell you the secret weapon: humans embarrassing themselves in mascot suits. I can't explain it, but they do the trick every time (as do their smaller brethren, the Muppets). My favorite part of any Nationals game is the Presidents' Race, where big-headed Teddy Roosevelt crashes and burns while swerving around the bases to the finish line (poor Teddy! Will he never win?!). I never met a mascot-themed SportsCenter commercial I didn't like (here's one of my faves), and I love those Oreo commercials with the Williams sisters (try this one and this one to see what gets me giggling).

To truly bust my gut, they need to be cute, cartoonish and furry. As much as I love my Nittany Lion, he doesn't really lend himself to chuckles. Any human-based breeds are out (sorry, Blue Devils, Lil' Reds and Boilermakers), save for maybe the UNLV Rebel, whose mustaches almost makes up for it. And except for Xavier' secondary mascot (the Blue Blob) and another I'll mention soon, the weird ones usually don't do the trick--including Ohio State's nut (or tree, or seed, or whatever the hell that is...although I have to give him credit for this commercial) and the worst mascot in the history of college sports, the Stanford tree (who was so distraught over being so stupid, it got drunk at a women's basketball game). 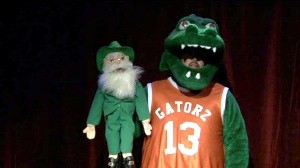 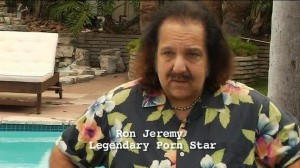 No, I need big feet and big bellies--the floppier the better. Birds are usually perfect, like Oregon's Duck, Big Jay from Kansas and my favorite avian aggressor, South Carolina's Cocky. And you can't deny the cute factor, like Akron's Zippy the Kangaroo (don't ask me what a Zip is), Goldy the Gopher from Minnesota (big teeth are funny, too...how can you not fall in love with that smile?!) and Florida's gator (big tail!). But all mascots in the universe bow to the king, the funniest creature to ever grace the playing field--and a surefire way to put an instant smile on my face. Yes, I'm talking about Big Red from Western Kentucky. His giant mouth and offset jaw, his eyes, his belly, his boogie, his unbridled enthusiasm...is there anything more perfect?! Is it any wonder that every year, the Capitol One Mascot Challenge always brings back this superior specimen--who comes across like a kinder, happier cousin to Gossamer from the Bugs Bunny cartoons (you know, the one who gets a "permanananent")? His catching skills, dancing and Homecoming Queen wave from this commercial is 31 seconds of heaven. 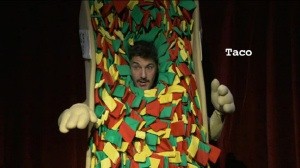 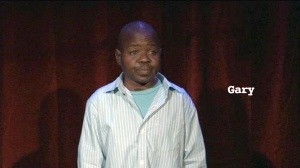 So when I saw the title Midgets vs. Mascots and skimmed the cover--which had plenty of furry costumed people running in a field--I checked it off on my wish list. It turned out to be the biggest mistake of my DVD Talk reviewing career. You see, this isn't a documentary, it's a "shockumentary"--which means it's staged and semi-scripted. The effort wastes no time in laying it on thick: "During the filming of this documentary, several people were hospitalized, many laws were broken, everyone was arrested." Oh boy...what did I get myself into?! 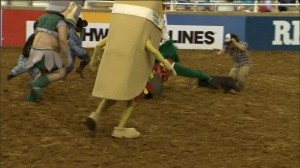 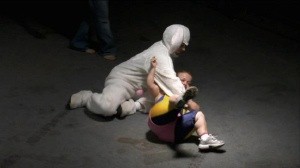 How bad does it get? It features Ron Jeremy, Gary Coleman and (huh?!) the entire Scottie Pippen family in paycheck-collecting appearances as themselves (also look for Jay of "Jay and Silent Bob" fame). But if you like fart humor, jokes about short people, vomit gags and culturally insensitive material (including a "normal sized" guy dangling a watermelon over Coleman's head, perhaps the film's lowest point), you'll be in heaven. This film doesn't seem to like women very much either, unless I'm somehow misinterpreting lines like "I wish I could hate-fuck the bitch out of her!" and "I wish I could cold-kick my wife like that!" Homophobia abounds, too--the "f" word is used so often and so easily, I actually think it isn't meant to be funny. 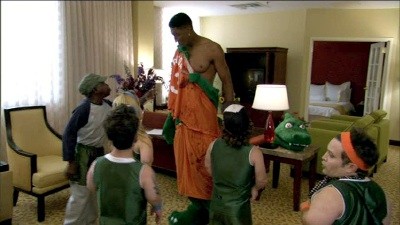 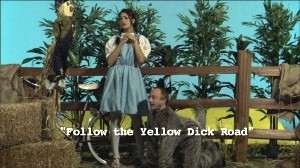 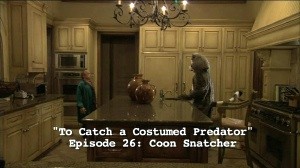 Mascots vs. Midgets starts with the death of Big Red Bush (motto: "Don't take it in the fanny from a tranny!"), a Dallas celebrity who struck it rich in the world of little people, porn and mascots (he even had his own inner-city school for mascots, Red's Maschizzls for Nizzles). He wants to give back to the people he loves most, so in his will he sets up a game for his money--five mascots will be pit against five midgets in a series of 30 competitions. The mascots will be coached by Red's third wife Bonnie (Brittney Powell), a gold-digging blond bimbo, while the midgets will be led by Red's son Little Richard (Mark Hapka), a preppy tool who hates little people ("These guy are worse than fucking cockroaches...they're worse than Mexicans!"). Presiding over the affair will be Red's longtime assistant Deng (Akie Kotabe), whose ethnicity and accent proves to be fodder for many demeaning douchebags. 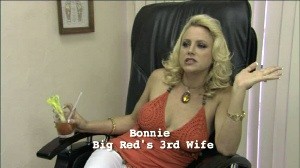 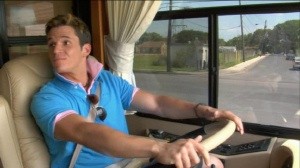 In the mascot corner is a gator (Richard Trapp) with a flatulence problem and a leprechaun puppet named Shamus; a mute stoner sheriff (Steve Krieger); a mild-mannered bunny (Josh Sussman); a sexually charged taco (P.J. Marino); and an overweight, misogynistic Spartan (Bob Bledsoe). In the little person corner stands redneck Lemone (Nic Novicki, embarrassed enough to just go by "Lemone" in the credits); bisexual meathead Russell (Jordan Prentice, embarrassed enough to just go by "Russell" in the credits); gay Geoffrey (Joe Gnoffo, subject of perhaps the most brutal of the midget attacks); lactose-intolerant Leann (Terra Jole); and a violent, horse-hung Gary Coleman (it's more of a "donkey dick, just shy of a Shetland..."). 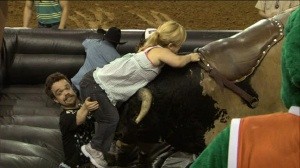 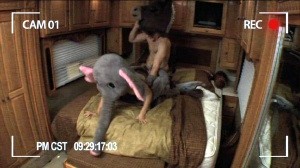 The competitions include a few contests at a rodeo, like catching a pig and riding an electric bull; chugging milk, which features the lines "The only thing I do better than eat pus is chug milk!" and "You finish this, I might just let you show me your cock!"; hooking up at a bar; making a porno trailer; and insulting strangers--including gay bar patrons, where our angry taco further shows how uninspired, juvenile and stupid this film is: "You know how I can tell you're gay? Cause I fucking hate you." (The failure of the "fags" to fight has Deng exclaiming "Bye bye homos! We try new bar!", killing two minorities with one stone). Along the way, team captains Bonnie and Little Richard engage in sex acts we're supposed to find funny or shocking (they both dress in drag for one shag...how edgy!). 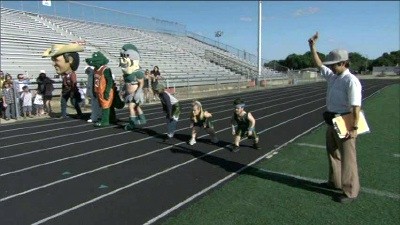 Exacerbating my anger is the manufactured controversy surrounding the scene with Coleman's penis. Not only am I not sure it's even a real penis, the amateurish editing leaves no doubt that it clearly isn't even Coleman. Are both parties that desperate for attention? M vs. M fancies itself a mix of Jackass, Borat and MTV's Road Rules, but it's an insult to those mostly mediocre efforts to be mentioned in the same sentence. I had to periodically take deep breaths to make it through this agonizing 85 minutes, and I was ashamed that I smiled in a few spots where the mascots fell while running (a reflex reaction of mine that has nothing to do with the film being funny).

Do yourself a favor and YouTube "mascots" for a bevy of videos far more entertaining than this trash. I'll leave you with some ominous words from Little Richard, spoken a mere 15 minutes into the film...

"This will be the No. 1 worst experience of my life." 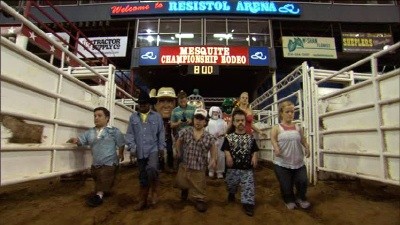 Video:
The anamorphic 1.78:1 transfer is just average, mostly due to the source material. This looks like a cheap documentary--the overall picture lacks detail and sharpness. It's also dim and dull with heavy grain and weak colors. Certainly watchable, but the transfer isn't doing the film any favors.

Audio:
The 5.1 track doesn't do much with its surroundings, most notably the rodeo sequence. Like the video, it's passable--but the lack of refinement fails to pick up as much of the secondary dialogue as it could. A 2.0 track is also provided, as are English subtitles. 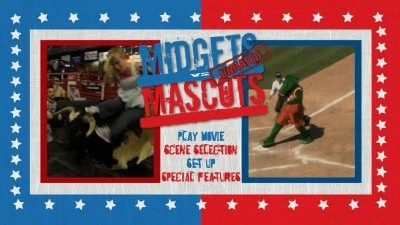 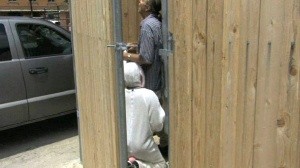 The character featurettes (17:45) are pretty much more deleted footage strung together. Lots more gay bashing and penis references here, as well as midget insults (Little Richard also gets in a dig at Gary Coleman: "He's black, he's washed up, he's nothing. He's not a nice guy."). Trailers round out the package, and I knew I was in trouble after the first one: SuicideGirls: Guide to Living, another boob-filled mess.

Final Thoughts:
Farts, boobs, fags, vomiting, dick jokes, midget insults, culturally insensitive quips, an angry Gary Coleman...and not a laugh to be found in 85 agonizing minutes of this mock documentary. And considering I'm an easy laugh when it comes to people dressed up in giant fuzzy suits, that's saying something. Do yourself a favor and YouTube the pride of Western Kentucky--I'll gladly stick with Big Red for my mascot fix. Skip It. 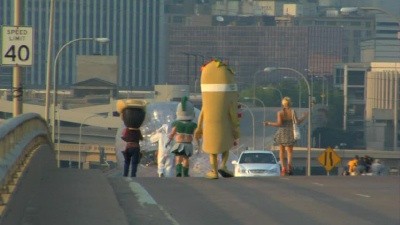